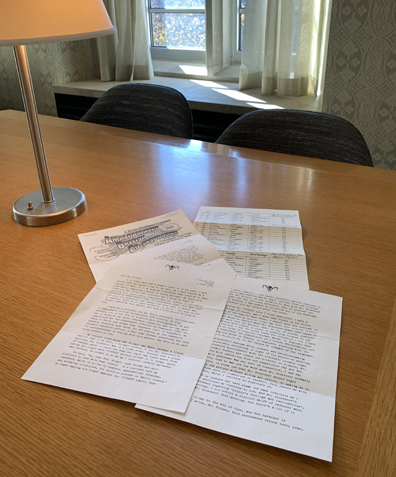 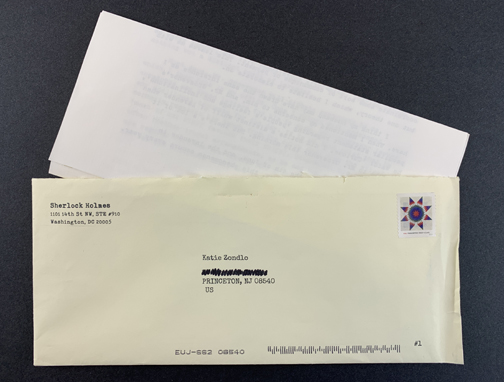 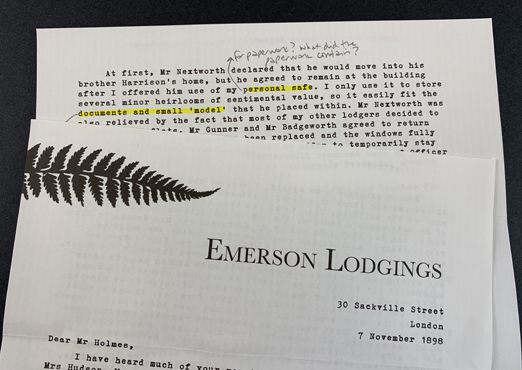 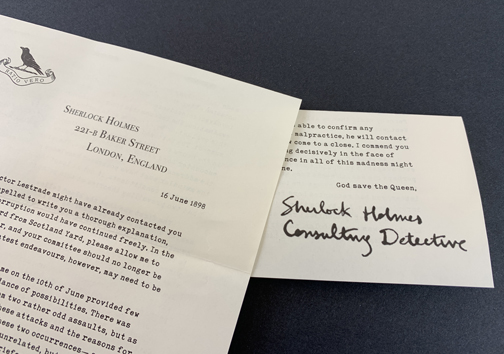 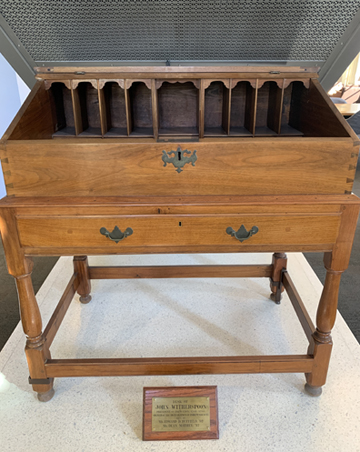 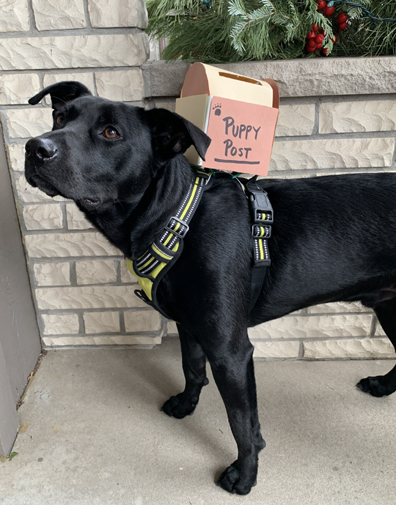 Dogs truly are a person’s best friend. But what happens when a dog desperately needs a new person to love and call their own? Why not say it with this postbox and letter set, designed by Katie, and delivered by a very special addition to her family!

We recommend reading Can I Be Your Dog?, written and illustrated by Troy Cummings (Random House, 2018 – read here by Read Aloud Book Family). Arfy is a homeless dog searching for a new family to love. He sends charming letters to several families living on Butternut Street, but he always gets turned down and sent away. Until one day, Arfy gets his own piece of mail from someone who was looking for a dog, just like him!

Katie followed the same design concept for the mailbox we created for this storytime project, with some minor modifications. Cut approximately 1″ off the top of a small tissue box, as well as a door in one side. Next, use construction paper to cover the box and add a rounded top with a mail slot. Use additional pieces of construction paper to create letters for the box! 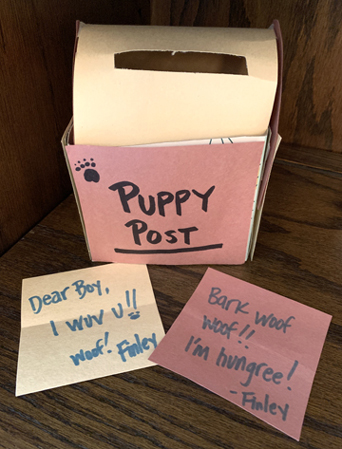 In order to make this project puppy post-friendly, Katie omitted the door handle and foam bead feet. Instead, she cut 4 small slits on the the bottom of the box and thread the ends of 2 pieces of ribbon (each approximately 20″ long) through the slits like so: 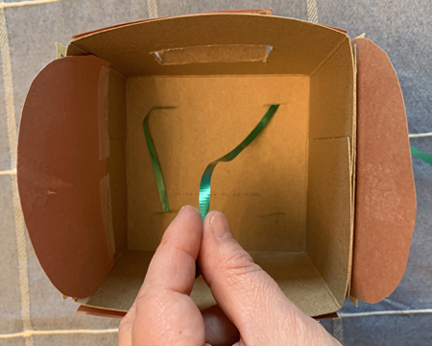 Now, four loose ends of ribbon will be sticking out of the bottom of the box. Tie those ends around your dog’s harness (or around their body) and trim off the extra. 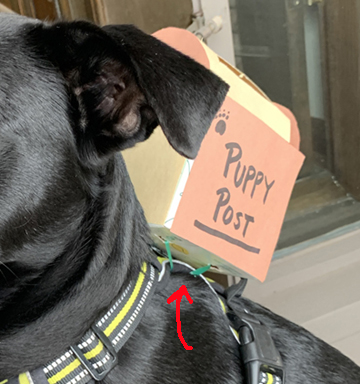 Drop a letter into the mailbox, and send them off to deliver the special note!

The handsome pooch starring in this post is Katie’s new furry friend, Finley! Finley is a rescue dog from the great state of Texas. He’s settled in comfortably into his new house in New Jersey with Katie and her family. He has a “ruff” life, that’s for sure. 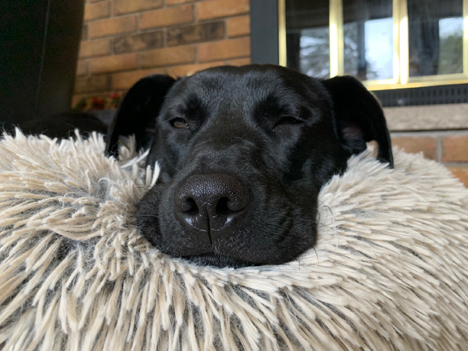 If you don’t have a dog in your house who is willing to wear a Puppy Post mailbox, that’s totally okay! You can simply enlist a favorite stuffed animal to deliver the letters… announcing the inaugural ARMADILLO AIRMAIL! 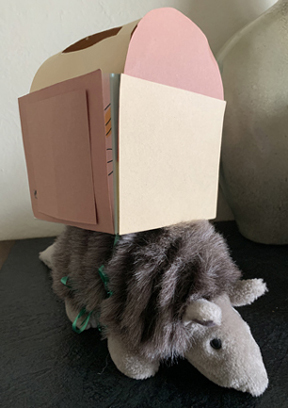 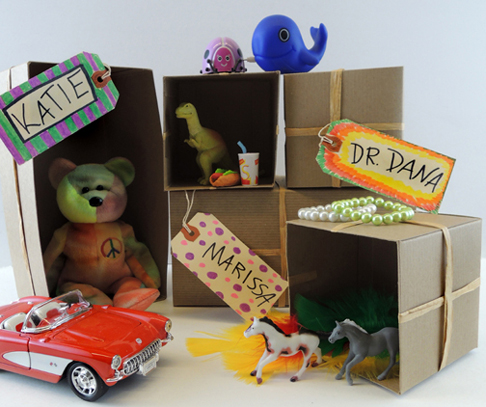 A brown paper package tied up with string? Check! It’s up to you and your partner, however, to guess what’s INSIDE the package!

We recommend reading Send It! by Don Carter (Roaring Brook Press, 2003). On Monday, a boy wraps, tapes, addresses, and mails a special package. Off it goes, traveling through the remaining days of the week (and from truck to boat to plane to train) until it arrives Sunday, just in time for the big birthday party!

This project is very simple! Cut the top or back off a number of boxes. Put objects inside the boxes, but don’t let the story time kids or grown-ups see what the objects are.

Next, have kids partner up with another kid or a grown up. Ask the kids to reach inside the box and describe what they feel to their partners without actually saying the name of the object. The partner has to make the best guess as to what’s inside the box. Continue the game with multiple boxes. 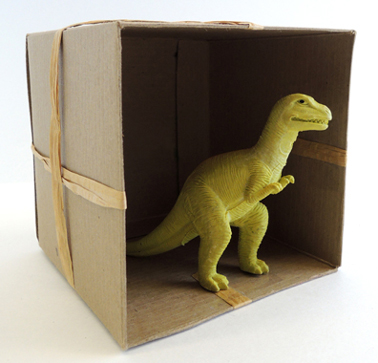 If you’d like to add a little craft project to the story time, we found these old package labels in the office supply cabinet and used markers to decorate them. Or you can fashion your own using card stock, a hole punch, and string. 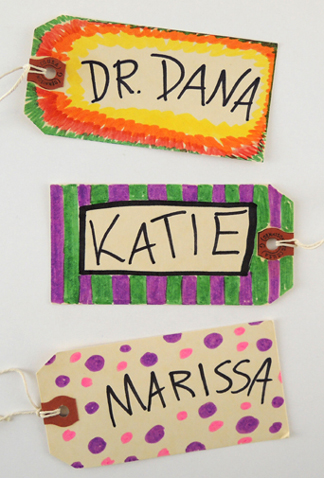