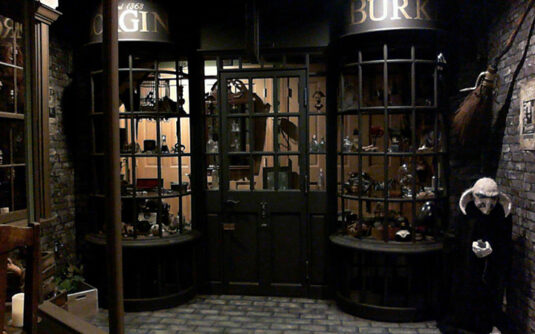 In the mysterious land of…Rhode Island…is a house with dark secrets. Well, the basement has some dark secrets. Unless you’re shopping for Flesh-Eating Slug Repellent. In that case, you’re totally in the right place! 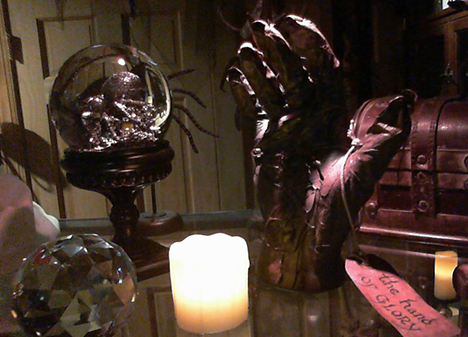 Welcome to the home of the Adams family, where Art major Corinne and her building contractor husband have recreated a fully functional Knockturn Alley. Here, witches and wizards can shop to their heart’s delight. 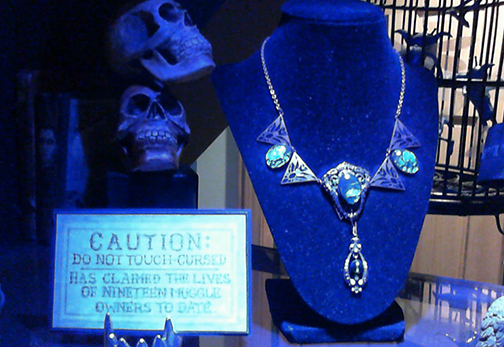 A huge Potter fan, the idea for Knockturn Alley was sparked by a trip to Universal Orlando. Corinne and her husband were already doing elaborate Halloween displays, but the trip inspired the creation of Borgin and Burkes. When the set got too large to haul outdoors in October, the couple cleaned out their basement and the construction continued in earnest. Currently up to five shops (2 for browsing, 3 for display), magically-minded shoppers can see self-stirring cauldrons, Kreacher the house elf, Cornish Pixies, books, bones, potions, and cursed objects, all whilst shrouded in fog. 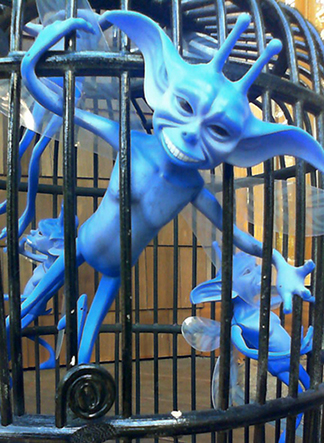 When is Knockturn Alley open to visitors?

Since Knockturn Alley is in my house, my basement, it is only open to the neighborhood on Halloween night. If you know me or are writing a story about the alley then I can have a private tour arranged. 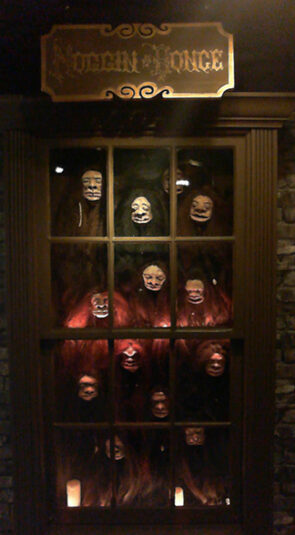 What proved the biggest challenge to recreate so far?

The biggest challenge, believe it or not, was the stacked cauldrons. They are plastic Halloween cauldrons and we had to hunt for the right sizes, paint them to look rusty and then sand them to look like old iron. When it came time to stack and glue them it took a bit of engineering until we got it right. My son also designed and made the self-stirring cauldron and he had a few setbacks. But now it works perfectly…well, it’s a magical cauldron after all! 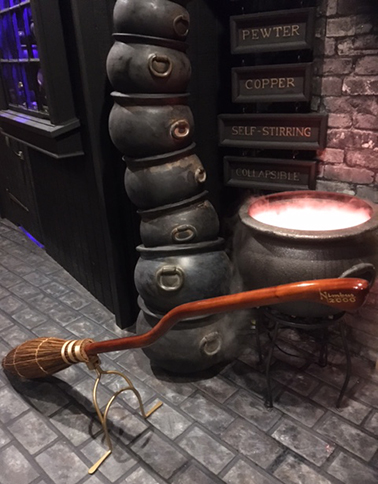 What is one of the most surprising things on your set?

The biggest surprise, if someone notices it, is the sub-basement in the bottom windows of Borgin and Burkes. (A “reflection” makes you think you’re looking down into the below ground level cellar window well-bottles, books, rats, candles etc. are all actually upside down-you’re looking into a mirror image–shhh, don’t tell!)

How many hours of construction and fabrication do you estimate you’ve put in?

The work time is 3 years of every spare minute we had and my husband and I both worked full time. Now it is an on-going project and we come up with little magical ways to tweak things and add new things for each Halloween. 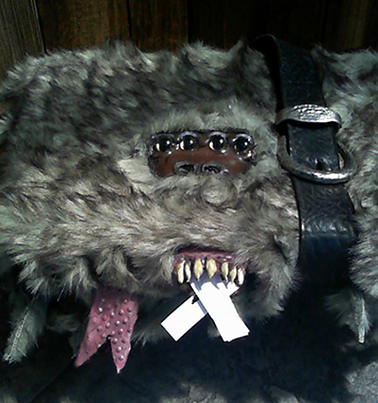 Tell us about your favorite object and why!

I have been asked before “what is my favorite thing” but I love everything! However my favorite shop is Borgin and Burkes (in the movie it just looks so creepy and fascinating!) and that was the first shop constructed for our Halloween display 7 years ago. Then the project just took off until we now have an alley of 5 buildings. 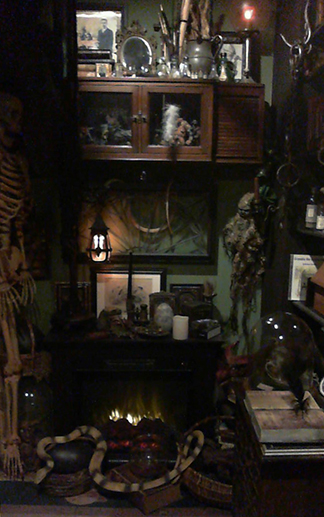 What are you building next?

The next thing to be built is a surprise because we like to surprise the neighborhood kids when they visit Halloween night! Last year’s new item was the Sirius Black “moving” poster that my son came up with and my husband built the rustic sign post to hold it!

What’s one of the best visitor reactions to your set?

I had a man from London visit one Halloween and the cool night air came into our open garage doors so the alley had a brisk feel and we have antique street lights with candle light flickering and fog and the whole atmosphere was right out of an 18th century London city street. He was so excited, he couldn’t believe he was in a basement! He was “dazzled” to use his words! My husband loved that because he built the buildings to look exactly like Universals. 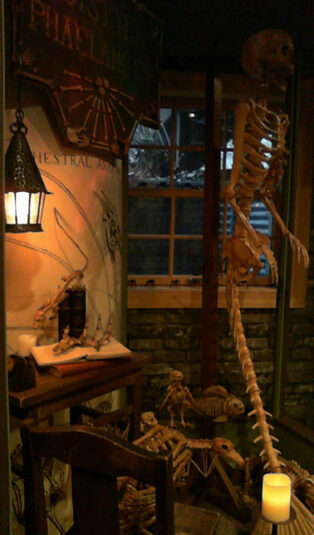 My own personal favorite reaction was a young girl who was an avid Potter fan. After taking the tour she said that this must be like reaching the top with a hobby one loves and she wished that someday she could have a display of a Potter destination in her home. She was quite right. I never thought I’d have this alley in my house. I love going down into this magical world and hanging out with friends or having a coffee with my husband and brainstorming about what we’ll do next! It’s really a Potter fans dream and I love sharing it with other fans. 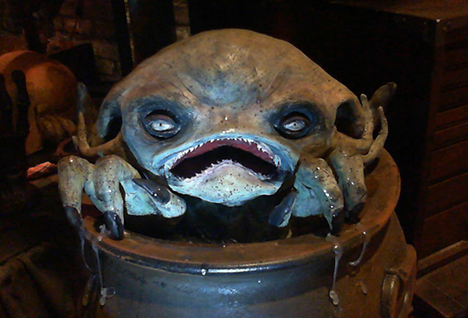 What house would the Sorting Hat put you in?

I think you must know what Hogwarts house I would be sorted into! I love spooky stuff and I love the nefarious Knockturn Alley! Hogwarts students are not permitted to go there let alone buy anything. Dodgy place…”You don’t want to get caught down there-they might think you’re up to no good!” So–Slytherin of course!

Images courtesy of Corinne Adams. Questions about anything you see here? Corinne is happy to answer them! Please email her at:  thevampirechronicles13@gmail.com If there is one person who knows the answer to this intriguing question, it is Lane O’Neil, the master wandmaker behind Gray Magic Woodworking. Lane brought his wands, tools, and expertise to our library’s Harry Potter Wand Works event, and we couldn’t have been more delighted.

Even though Lane has been woodworking for 25 years, he didn’t take up the wand making lathe until fairly recently. Four years ago, during a hike, he picked up an oak branch. He carved the branch into his first wand – a gift for his young daughter. 291 hand-crafted wands later, Lane is still busy carving and shipping his unique pieces around the world. Fantastically, Lane donated 3 of his wands to our Accio Wand blog contest! Readers of all ages were invited to submit an original Harry Potter spell, be it silly or serious. The winning entries are posted here.

I got interested in wandmaking slowly over time. I enjoyed the Harry Potter movies, and being an artist, I was instantly drawn to the concept of each witch or wizard having a unique wand. They were made from different woods, had different cores, and were made by different wandmakers. The idea that the wand was linked to the person was wonderful. Sometimes the style fit the personality like Hermione, Sirius, or Narcissus. And sometimes it didn’t, like Ginny, Harry, or Mad-Eye. Sometimes the wand only reflected the holders shallow exterior, like Delores Umbridge, or what beauty was hidden beneath the surface, like Luna.

I had vision upon vision in my head of new pieces to create. And I got to work. I wanted each piece to be unique. I love the idea of the wand being paired to one person. It’s less of a part time job now, more of a labor of love. What sorts of woods do you use?

When I first started, I used what was readily available, Oak, Poplar, Ash, Maple. But as I discovered, there are hundreds of species of trees. I now use Paduak, Gaboon Ebony, Birch, Purpleheart, Cherry, Bubinga, Cocobolo, Koa, Osage Orange, Mahogany, Lacewood, you name it. The more exotic and far traveled it is the better. I love the different textures, grains, colors, and figures. Where do you acquire the wood for your wands?

I get wood wherever I can. Found pieces, traded pieces among my woodworking group, but primarily I use exotic hardwood suppliers. I got requests to craft from Holly, Elder, and Larch. And since I just couldn’t run down to Home Depot and pick up some Bolivian Rosewood, I needed to branch out and discover new suppliers. My favorite place is called Hearn, they are located in Oxford, PA.  It’s like a candy store for people who craft wood. They have everything from domestic scraps to 16′ slabs of exotic wood shipped from the hearts of far away continents.

Describe the process of carving a wand from start to finish.

I start with a dried, seasoned “blank.” It’s usually about 1″X1″x16″. I drill a small shallow hole into each end to secure it in the lathe. I remove the Morris Taper spur from the lathe, tap it onto the wood blank, insert the spur/wood onto the lathe, and lock in the tail stock. I make sure I have my safety goggles and breathing respirator on, and my sleeves rolled up.

I position the guide, turn on the lathe, and use a “roughing gouge” to take the edges off until I have a smooth, long cylinder. I can then draw lines, if needed, for length or detail locations. Then I use various skews and chisels to shape the wand. When it’s just about fully shaped, I use sandpaper to smooth it – working to smaller grits until I’m happy with the texture. I can also stain or paint the wand while it’s spinning. I usually use a carnauba wax/ tung oil blend to finish fully. When I’m just about done, I “part” the wand from the lathe by cutting the material away by the tip or pommel until the wand falls off. I move the piece to the work bench, saw the remaining scrap block off, sand the two rough ends, and finish with carving, wood burning, or other decorations. I tag it, give it a name, and a number. How long does it take to make a wand?

The time it takes to make a wand depends on the intricacy. The first wand I ever turned took an hour and half…and it was kind of rough. I spent about 80% of the time carving and shaping, and 20% sanding and finishing. Now it’s more like 40% of the time carving and shaping, and 60% finishing. I under-valued the worth of the finish when I got started, but my skill improved.

I made 22 wands for my daughter’s class for Valentine’s – real simple and basic. Those took 4 minutes each. I also made one covered in carved vines that took 8 hours. But the average time would be 45-60 minutes. What locations have your wands shipped to?

I’ve shipped as far North as Fairbanks Alaska, as Far East as Taipei Taiwan, as far South as Singapore, and as far West as Anchorage, Alaska. All over Europe and Saudi Arabia too. What’s the most unusual or significant wand you’ve ever made?

The most unusual wand I ever made was a hand carved series of twisted “vines.” It appears to be woven, but is actually sculpted out of a block of wood. The most significant wand I’ve ever made is a tie. I made a Beech wand that was chosen by a young girl from the Make-A-Wish Foundation. There wasn’t anything too special about it other than the leather wrapped handle, but she chose it. The other one was purchased by a mother in London, England. She bought a Japanese Maple for her son Harry for his 10th birthday…that was pretty cool. His mother sent me a photo.