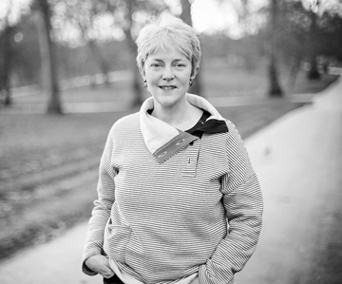 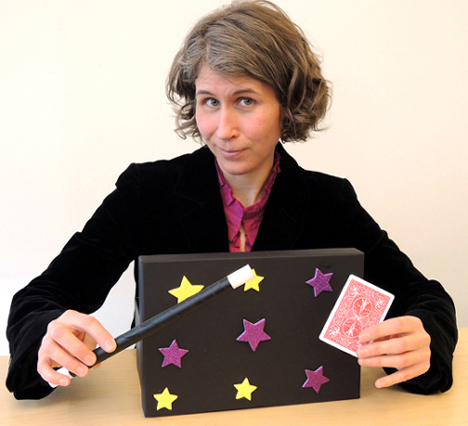 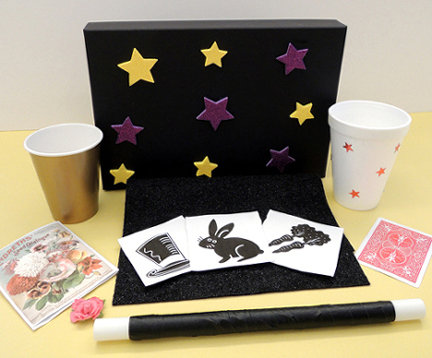 This project was the culminating event at To Be Continued, our weekly story time for 6 to 8-year-olds. Every week, we read from a chapter book and celebrate the the end of the entire book with a project and/or activity.

We read Horten’s Incredible Illusions by Lissa Evans (the sequel to Horten’s Mechanical Mechanisms (Sterling Children’s Books, 2012)). Young Stuart Horten moves to the town of Beeton and expects to be thoroughly bored. However, he soon discovers that he is part of a magical legacy left by his Great Uncle Tony, who was a stage magician and illusionist. In the first book, Stuart and his friend April solve a series of complicated clues and find Uncle Tony’s secret workshop. In the sequel, the friends again embark on a journey. This time, they’re searching for Great Uncle Tony’s will, which bequeths the contents of his workshop to whoever finds the document first. Clues are hidden in each of his magical stage illusions, but…the magical worlds inside the illusions are real and in some cases, dangerous. And Stuart and April aren’t the only one interested in getting their hands on those tricks.

We definitely needed some incredible illusions to celebrate the conclusion of these awesome books. I designed these individual mini magic shows to be easy enough for 6-year-olds to do, but intriguing enough for 8-year-olds. After consulting a number of children’s magic books, I found Amazing Magic Tricks: Beginner Level by Norm Barnhart (Edge Books, 2008) to be the most useful. The 4 tricks described in this post are from this book.

You’ll need a box with a lid to store your tricks and shield your hands from the audience as you prepare your tricks. A memory box is perfect for this. I purchased mine at Michaels Craft store. I went with black, but they come in all sorts of colors and patterns. 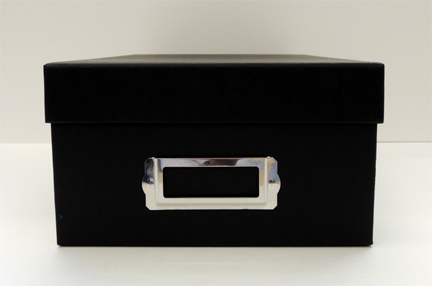 Decorate the lid of your box however you like (I found some self-adhesive glitter foam stars in the clearance section at the craft store) then slide the lid onto the box like so. This creates a “screen” and a “backstage” area to prep your tricks. 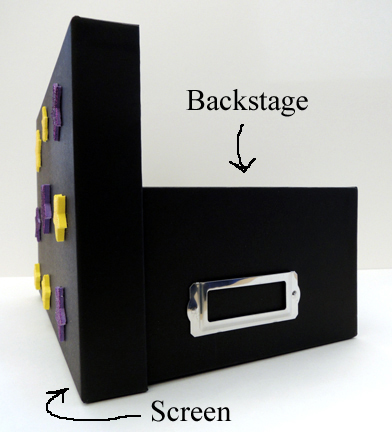 Next, wrap color masking tape around the PVC pipe. Your magic wand is ready! 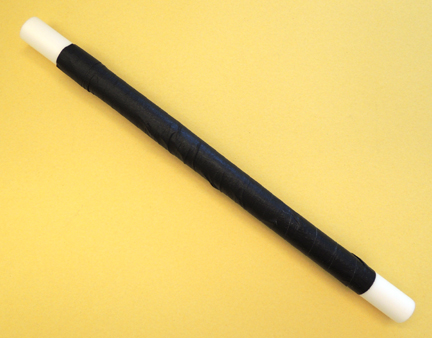 The most important thing about this trick is making sure the flower is small enough to hide in your fist. I purchased 1.25″ paper flowers for the kids (scored on discount from the scrap booking section of the craft store). 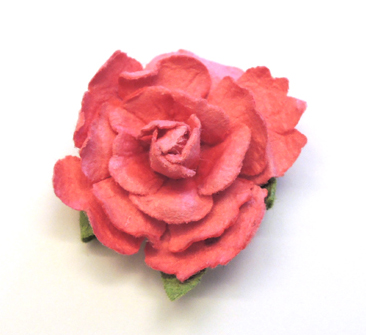 Behind your box’s screen, grab the flower in your fist. Then use the same hand to hold the paper cup with your fingers. 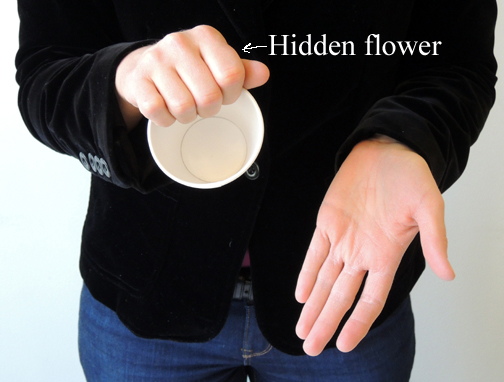 To perform the trick, show the audience that your cup is empty. Then say “Oh no! It’s empty. Well, good thing I have some stupendous magic seeds!” Pick up the empty seed packet and pretend to pour seeds into the cup. 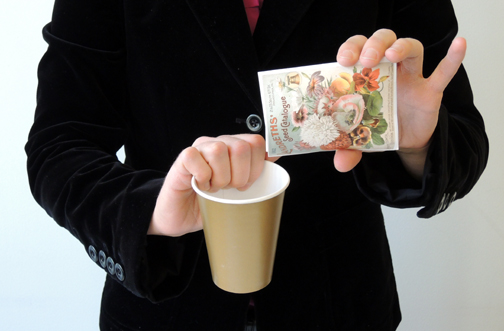 Wave the wand around muttering magical incantations. While the audience is distracted by the wand, open your fingers and drop the flower into the cup. Shout “Ta da!” and show them that a flower has magically appeared! 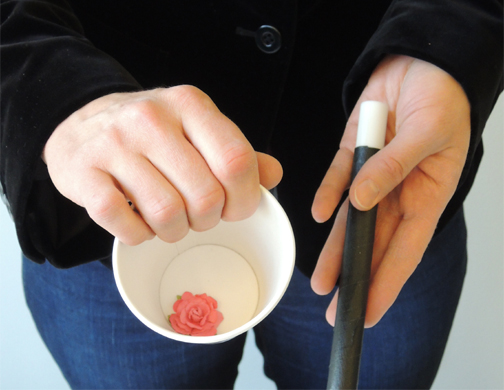 Print the hat, rabbit, carrot template. Fold and tear the strip in 2 places, like your see below. It’s really important that your TEAR the strip. Don’t cut it with scissors! 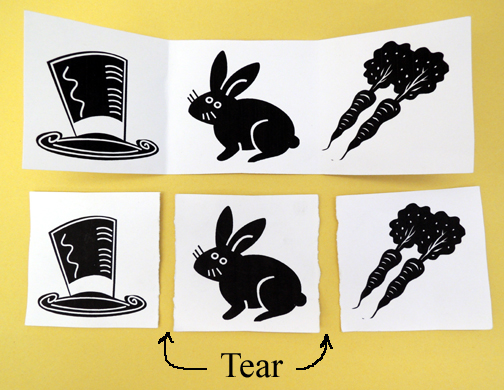 To perform the trick, hold up the 3 image cards and say “You see a hat, a rabbit, and some carrots, but with my amazing magical skills, I will pull the rabbit from under this cloth every time!” Turn your back and have an audience member arrange the 3 image cards on the table and cover them with felt. 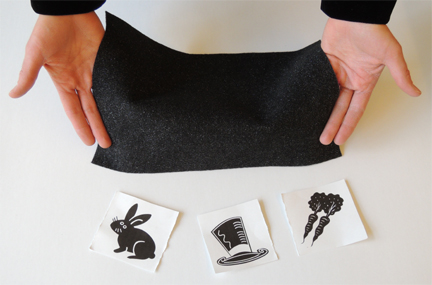 Reach underneath the felt and feel the edges of the image cards with your fingers. 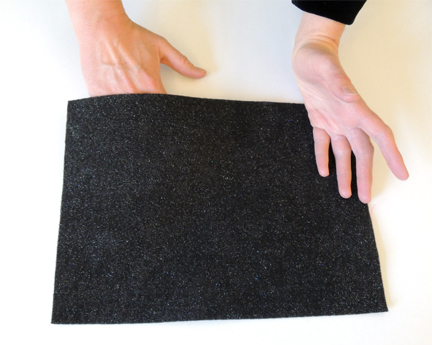 The rabbit will be the only image card with two torn edges. Remove it from under the cloth with a flourish! Repeat with a difference audience member. Astounding! 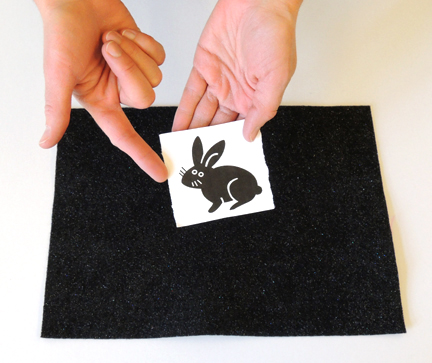 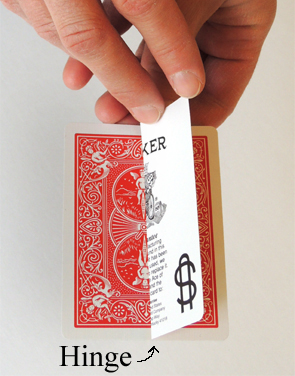 To perform the trick, flatten the hinge to the card and hold it up to your audience, keeping the taped side facing your body. Invite an audience member to come forward and try to balance the Styrofoam cup on top of the card. Then say “You see it is impossible. But I will now use magic to make the impossible, possible!”

While you’re talking, sneak a finger up the card and open the hinge on the back, forming an area for the cup to balance. From the side, it looks like this:

But from the front, it looks like the cup is now balancing on the card! 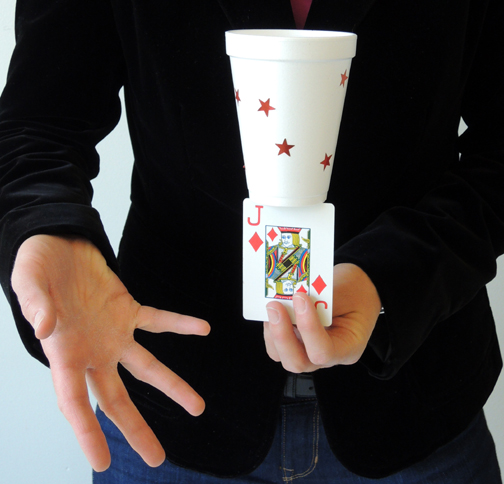 To perform this trick, tell the audience that you have magic glue. Hold up a paintbrush and Invite an audience member to come up and “paint” your hand with the magical glue. For my version of the trick, we used 1″ foam paintbrushes I had left over from another program. 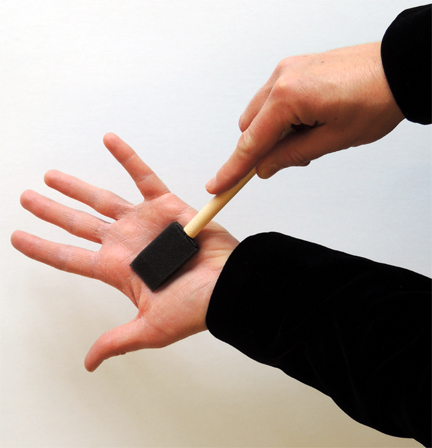 Now hold the wand in your “glued” hand. Say “Observe my stupendous magical glue!” Extend your arm across your body and out to your side, still grasping the wand. Next, wrap your free hand around the wrist of your wand hand. Slowly and dramatically, lift each finger from the wand until you no longer appear to be holding it. 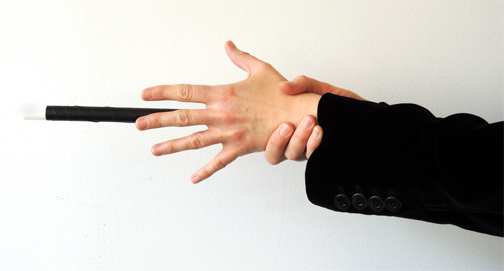 But you are holding it of course. Because when you grasp your wrist, you sneak a finger behind your wand hand and hold the wand like this: 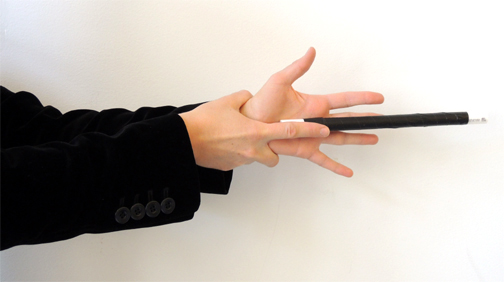 Now have the audience clap once to have the wand “detach” from the magic glue. Carefully lift your finger to release the wand, and let it fall dramatically to the floor. Take a big bow.

The kids absolutely loved this project. I performed the whole show first, and then I deconstructed all the tricks and each kid made his/her own set. If, by the way, you’d like to see the awesome mechanisms we made after reading Horten’s Miraculous Mechanisms (the first book in this set), click here.

In May 2015, I interviewed Lissa Evans about her fantastic books. If you’d like to hear it, click here! 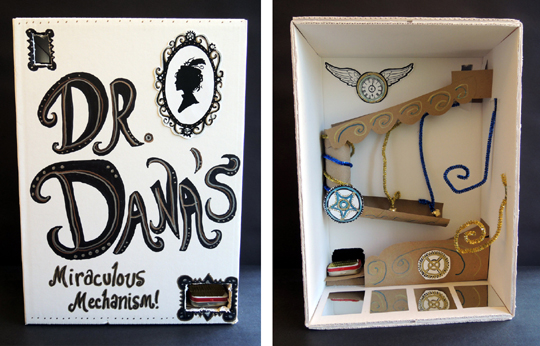 If you have a hankering to create an old-fashioned, coin-operated, yet somehow completely modern mechanism that dispenses a secret key, you’ve come to the right place! For this particular model, the coin goes in, hits a marble, which then rolls down the various tubes, dings two bells, and nudges a mini Altoid container out the bottom. 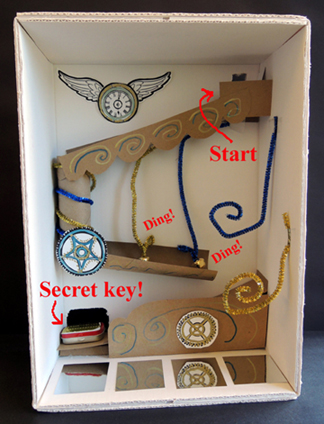 Most of the projects you see on this blog are from Tiger Tales, our weekly story time for 3-5 year-olds. But we do have another weekly story time for 6 – 8 year-olds called To Be Continued. Basically, I read from a chapter book over a series of weeks, and then we do a project (or activity, or field trip) when we finish the book. This project is from that program.

We read Horten’s Miraculous Mechanisms: Magic, Mystery & A Very Strange Adventure by Lissa Evans. Ten year-old Stuart Horten, recently relocated to the town of Beeton, is steeling himself for a long, boring summer of nothing (topped off by a set of annoying triplets next door). But everything changes when he discovers a hidden message and a cache of old coins from his Great-Uncle Tony Horten. Great-Uncle Tony, a renowned magician, stage illusionist, and creator of fabulous contraptions, mysteriously disappeared in 1940, leaving behind a secret workshop. If Stuart can follow the clues and solve the puzzles, he’ll find the workshop!

During this project, I stressed – repeatedly – that testing and failing is part of designing and engineering. We tested, and tested, and then tested some more. There were a lot of escaped marbles rolling on the floor, but there were no lost tempers! Also, some kids opted to use just the marble for the mechanism (as opposed to putting the coin in juuuuust right).

The only prep I did for this project was to use a box cutter to cut the coin slot and the dispenser slot. I also helped with the very first step – setting up the initial platform for the marble. The platform had to hold the marble steady, but also allow it to roll free when it was nudged by a coin or finger. With that in place, I turned them loose with the supplies and circulated around the tables, assisting when needed, hot glue gun ready.

If you can get it, I highly recommend mirror board to add some flash and fullness to your mechanism. I buy mine online at Discount School Supply. 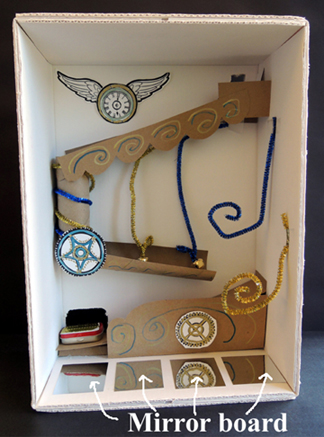 I found a little textured gold paper in the Bling Bin, so I added it to the top of my key box. And don’t forget to enclose the key from the template!

The template artwork was created by Princeton student artist Aliisa Lee. Originally, it was used for a Steampunk hat decorating activity that was part of a larger Journey to the Centre of the Earth event. I mostly used Aliisa’s gears for the mechanism template, but if you’d like to see more of her artwork in action, take a look at this dapper gent! 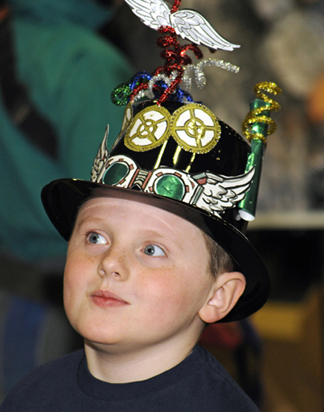