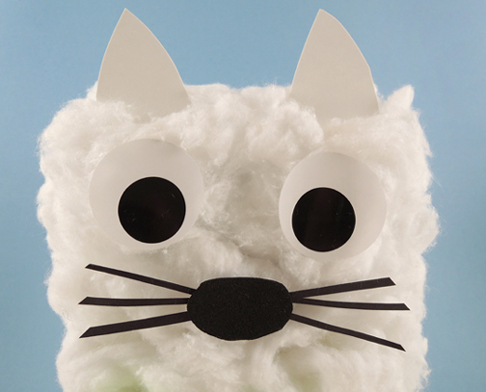 We read Papillon: The Very Fluffy Kitty by A.N. Kang (Disney Hyperion, 2016). Papillon is a big, fluffy kitty. In fact, he’s so fluffy, he can float on air! Miss Tilly fears her cat will fly away and get lost, but then she discovers that clothing keeps Papillon on the ground. She begins designing costumes for Papillon, each outfit more ridiculous than the next. Papillon finally puts his paw down and refuses to wear anything. And, just as Miss Tilly fears, he floats out the window and gets lost in the scary woods. Papillon tries fashioning a hat, scarf and belt out of leafy vines so he can walk home, but they don’t work! Luckily, a friendly bird tows Papillon home. When Miss Tilly meets Papillon’s new friend, she has her best design idea ever…a birdhouse hat to keep the friends together, and Papillon somewhat grounded. 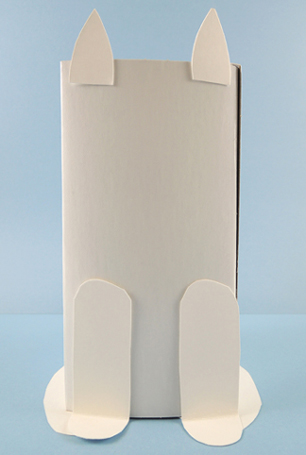 Basically, each kid started with a cat box, as shown above (it’s remarkably similar to this one, but we used a box instead of an oatmeal container this time). Definitely use hot glue to fix the pieces down, and use poster board for the hind legs, front legs, tail, and ears. Anything less sturdy is going to buckle under all that glue and cotton balls. Because you’re going to use lots and LOTS of glue and cotton balls… 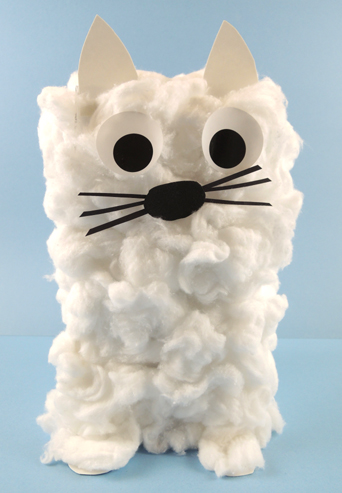 Basically, just cover the box with cotton balls! The fluffier, the better! For the face, we used large, 1.5″ eyes stickers from Oriental Trading Company (a roll of 100 pairs is $2.50), and a bit of self-adhesive foam for the nose. You can just use construction paper to make these, though. The whiskers are construction paper as well.

Once the fluffy cats were finished, the costuming portion of the project began. We made hats. The basic hat was a 5.25″ circle of white poster board with a paper cup hot glued to it. Kids could choose the color, and height, of their paper cups. 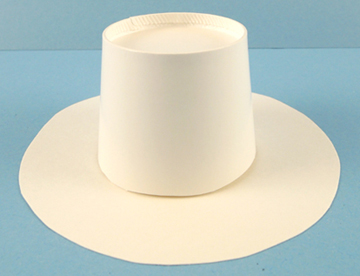 Then, out came the Bling Bin, as well as sparkle stems, duck quills, patterned paper, and fabric flowers. And things got FANCY. 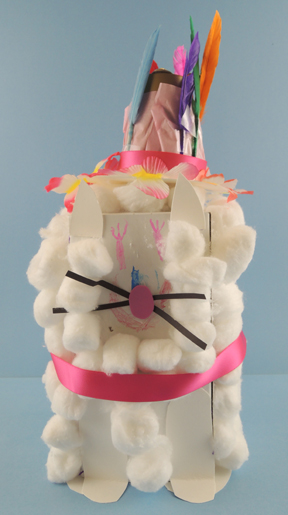 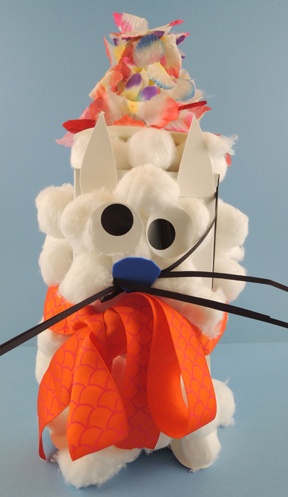 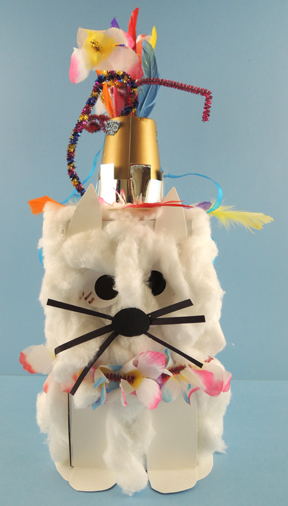 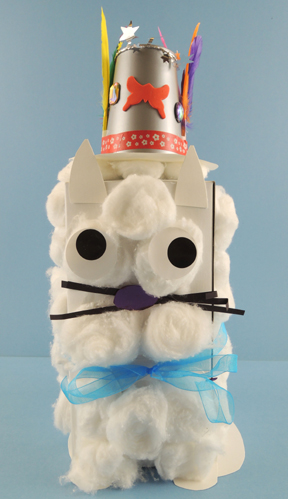 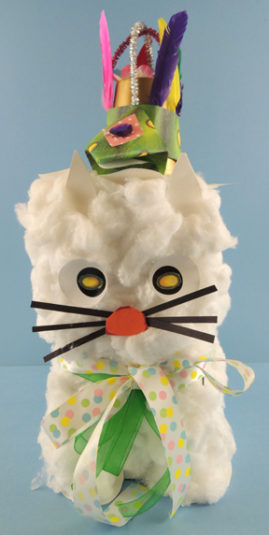 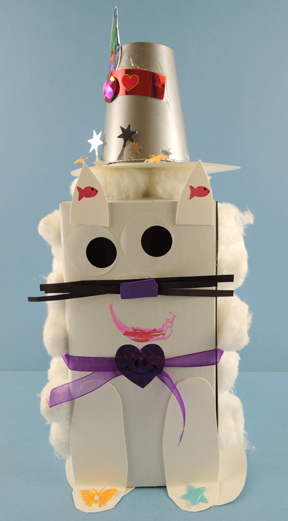 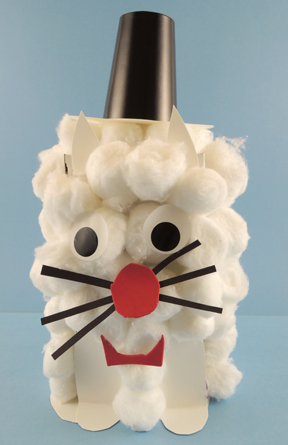 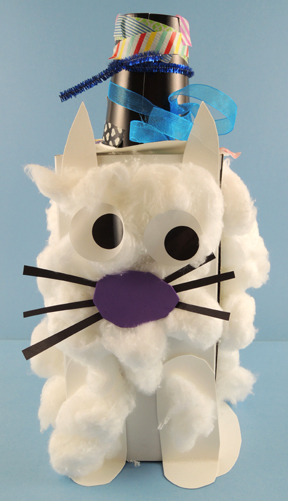 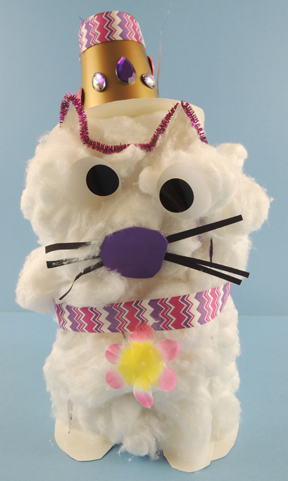 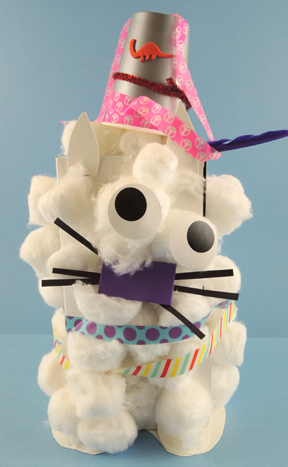 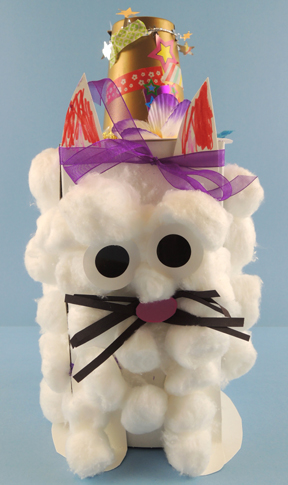 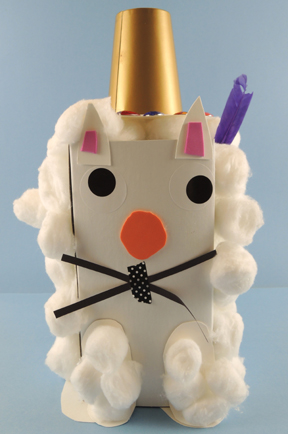 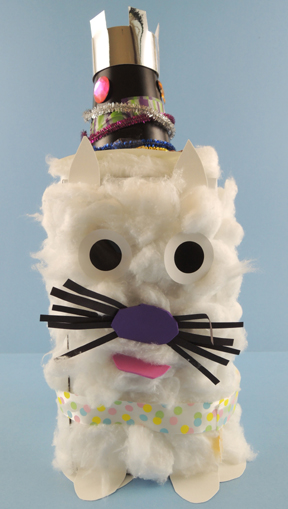 When the costumes were finished, each cat received his/her very own bird friend. This was a little wooden bird whistle, left over from this epic robot story time. Tweet tweet! 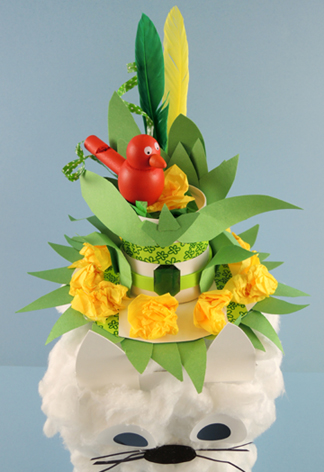