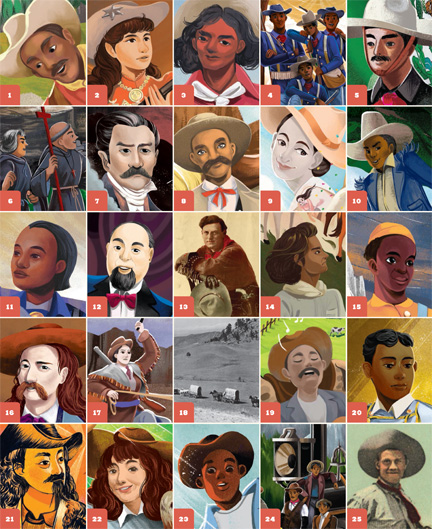 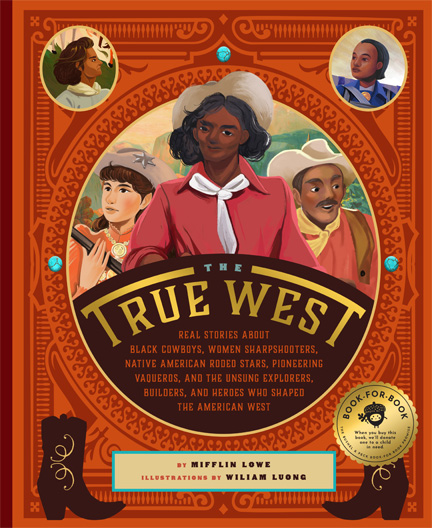 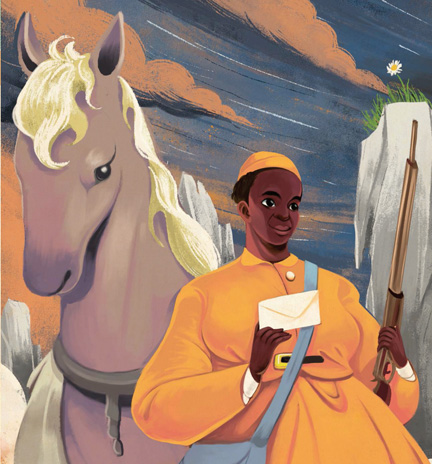 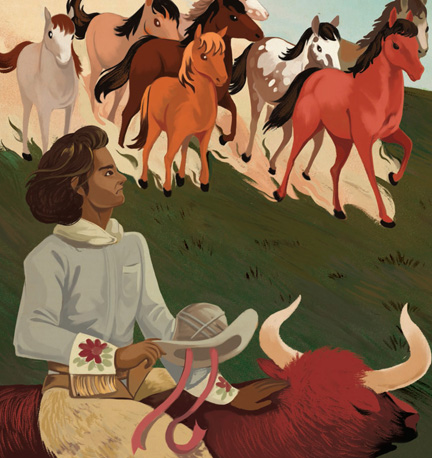 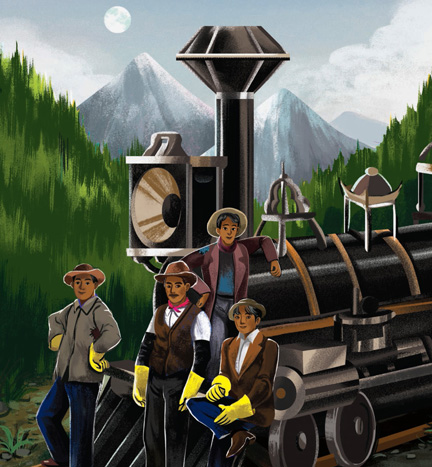 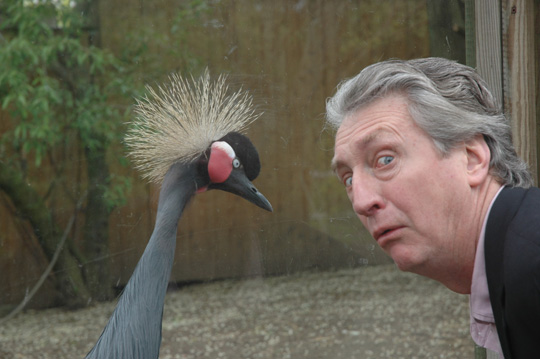 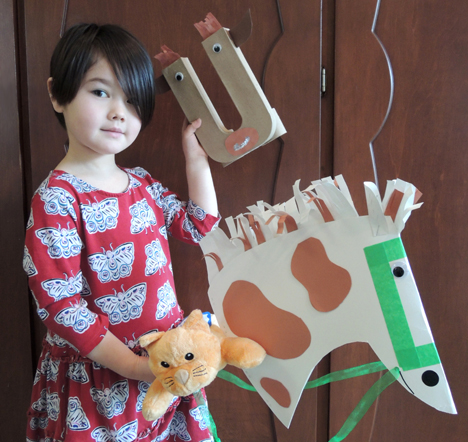 There’s trouble at the ranch…the letters are getting mixed up and causing a word ruckus! Grab your lariat, jump up on that cow pony (with your stuffed kitty, Kiki), and let’s wrangle the alphabet ya’ll!

We read Lexie the Word Wrangler, written by Rebecca Van Slyke, and illustrated by Jessie Hartland (Nancy Paulsen Books, 2017). Lexi is a word wrangler, taking little words and roping them together into bigger words. But lately, some pretty strange things have been happening at the ranch. Someone is stealing words, putting them in different places, and switching things around. The final straw comes when Lexie goes to sleep under the S-T-A-R-S and finds herself under the R-A-T-S. Looks like she’s got a word rustler to catch, but maybe, just maybe…they can be friends? 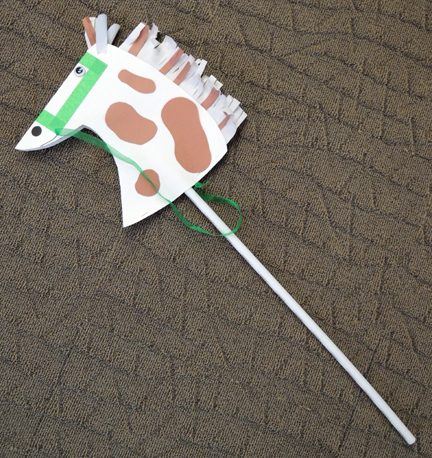 We made our standard story time stick horse for this project…you will find the instructions for it here, in our Show Jumping post. Our only modification was to add some construction paper spots. Our cow letters were also recycled from another project… 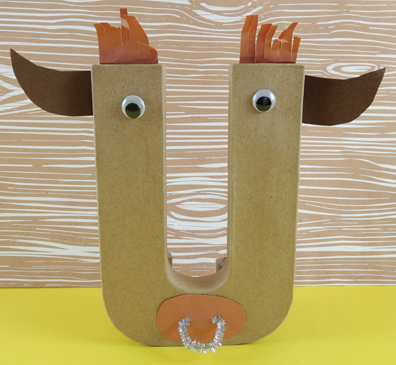 You might recognize the paper mâché letters from the activity we did at our grand gallery reopening. We added paper horns, hair fringes, wiggle eyes, and a sparkle stem nose ring to our cow letters, but you can just go with markers if you like!

The 8″ letter you see above was purchased online from Consumer Crafts. At $2 each they can be a little pricey, so our alternative is to print the card stock vowel template from our Fishing for Vowels post. In order to stand the letters upright, hot glue pieces of toilet paper tube to the back. 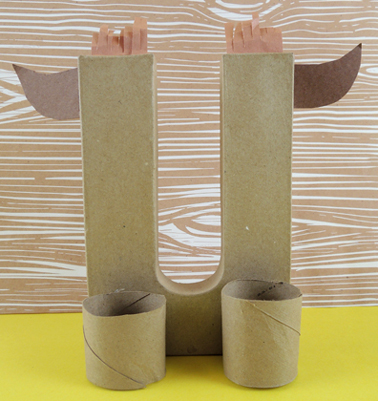 The final piece of the project is the lariat, and this is very easy. Staple a 1.5″ x 28″ strip of poster board in a circle. Make the circle as wide as possible and definitely using staples, as it gives the lariat some heft when you’re tossing it. Punch a hole in the circle, then knot some yarn through it. Done! 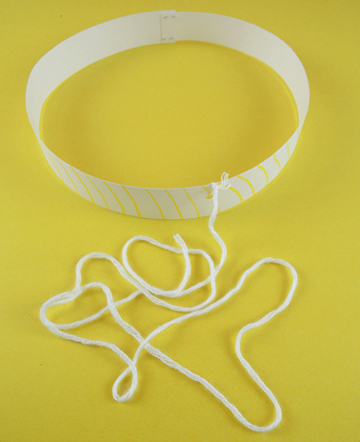 To wrangle, place your cow letter on the floor, swing up on your stick horse, circle the lariat, then drop it over the letter! Yelling “YEEHAW!” optional. 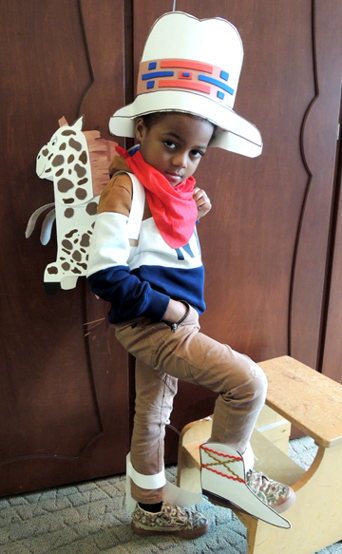 Ya’ll ready to mosey? Deck yourself out in a big ‘ol hat and boots, then ride into the sunset with your faithful horse backpack!

We read Are you a Horse? by Andy Rash (Arthur A. Levine Books, 2009). It’s Roy’s birthday and his buds give him an awesome present…a saddle! Now Roy just needs to find a horse. Thus begins his epic journey of asking every single living (and even not living) thing if it’s a horse. From cacti to sloths, Roy strikes out until…he meets a creature who fits the description exactly. Roy finally gets to enjoy that horseback ride, but as the hilarious final page reveals, it’s not quite what the reader expects!

We’ll start with the hat! Trace a cowboy hat on poster board, making sure to leave the brim extra wide, as you’ll need to cut a slit in it later. Our hats were 9.75″ tall and 16.75″ long. The kids decorated them with markers, construction paper, and self-adhesive foam. To wear the hat, cut a slit in the brim that’s wide enough to slide onto your head: 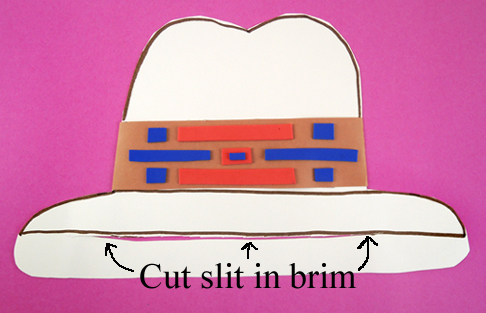 Now for the boots! Trace the cowboy boot template on poster board, then decorate. Again, we offered markers and self-adhesive foam, but the champion of this rodeo was rickrack ribbon. It looked awesome. 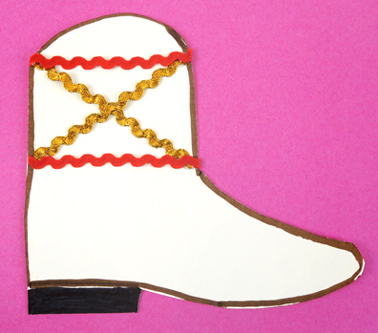 To wear the boot, attach a strip of poster board to the back of the boot, then loop it around your ankle and secure with tape. 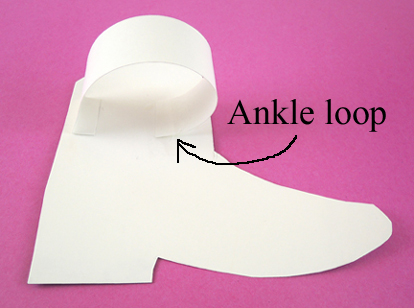 Finally, the horse backpack! It’s the same as the robot backpack we made here. Cut four, 1.5″ slits in a box, then use scissors to slightly enlarge the slits (it makes it easier to slide the straps through in the next step): 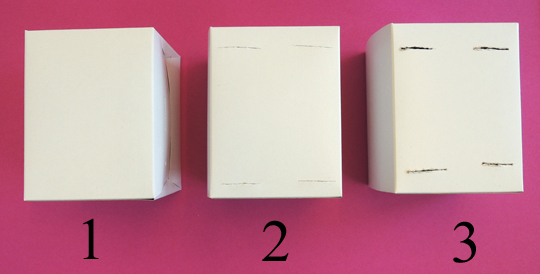 Thread two, 1″ x 28″ poster board straps through the slits like so: 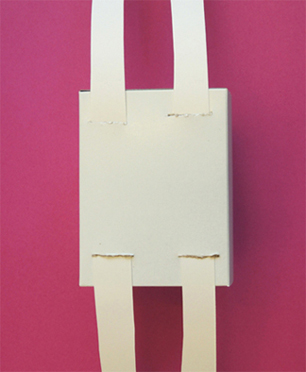 Curl the straps over your shoulders, adjust them, and secure with staples. Put pieces of masking tape over the staples (thus avoiding staple scratches or clothing snags). You can tie an (optional) piece of string, ribbon, or yarn around both straps to keep them from sliding off your shoulders if you like.

Finally, decorate your box like a horse! Katie crafted the head and legs with with poster board, then used markers, self-adhesive foam, and construction paper to make this prancing pinto… 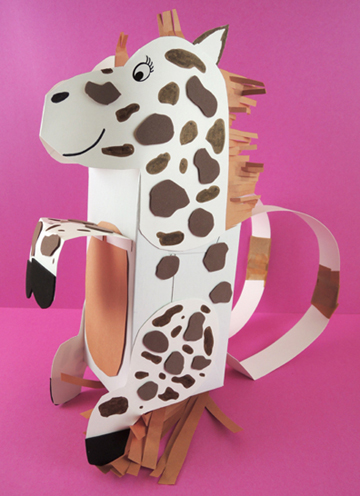 When your project is done, suit up, saddle up, and riiiiiide partner!