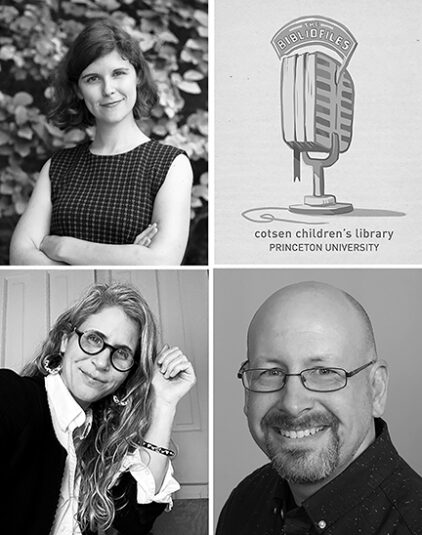 You are Tolo, a mouse and apothecary’s apprentice. When sickness strikes the distant village of Mossden, you must make a treacherous mountain crossing with the cure. From ice chutes to surprise attacks, the decisions are yours as you navigate the dangers and obstacles in your path.

Tolo is illustrated by David Deen, who grew up sketching the monsters and beasts in his brother’s Dungeons & Dragons manuals and reading fantasy books. After earning a BA in Art from the University of North Texas, David worked as a computer game artist before embarking on his freelance illustration career.

Tolo is written by Cotsen’s own Dana Sheridan! And since Dr. Dana can’t interview herself, we’re delighted to further introduce our guest host, Betsy Bird.

In addition to being a super librarian, Betsy Bird hosts two podcasts, has a popular blog called A Fuse #8 Production for School Library Journal, and reviews for Kirkus and the New York Times. Betsy is also the author of two picture books, co-author of Wild Things: Acts of Mischief in Children’s Literature, and editor of the middle grade anthology Funny Girl. Her most recent release is Long Road to the Circus, a children’s novel illustrated by Caldecott Award winning artist David Small.