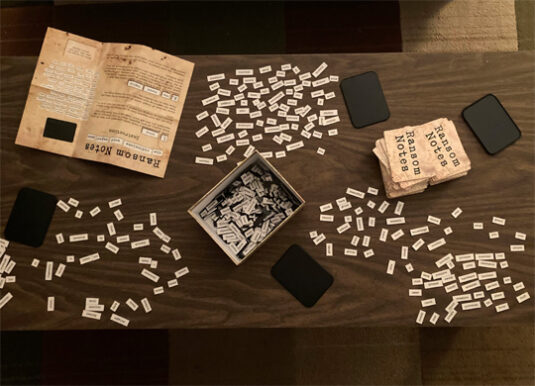 Quick! You have 90 seconds to describe the inside of Chuck E. Cheese, using only 75 random letters. OK, how about asking your neighbor to borrow something from their kitchen? Summarize the Star Wars movies? Explain to a grocery store worker why you have a monkey with you?

Welcome to Ransom Notes (by Charty Party), an awesome word magnet game that challenges up to six players to create the best description they can…using very few words…and zero grammar! 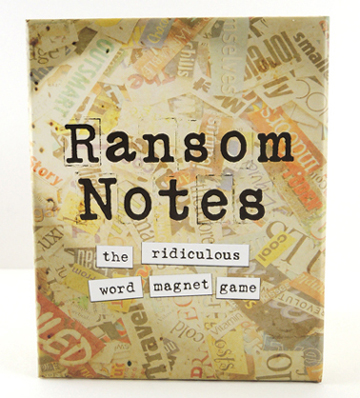 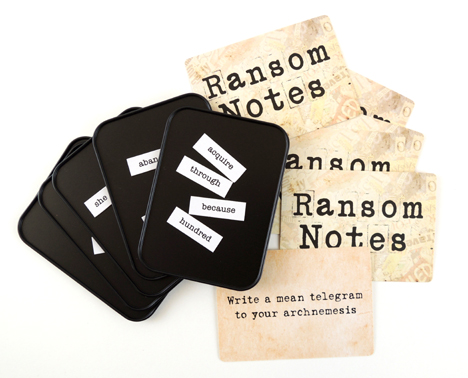 I will tell you that the game does not come out of the box ready-to-play…you have to individually separate multiple sheets of magnets. But after that, you’re ready to go!

Each player gets a metal submission card, and grabs 3 pinches of the letter tiles (about 75 tiles total). Then each player organizes their letters facing up. This process takes a WHILE. But I will say that the 2 players I played with had a good chuckle over their words, and were spontaneously stringing together funny sentences while also getting organized for game play. 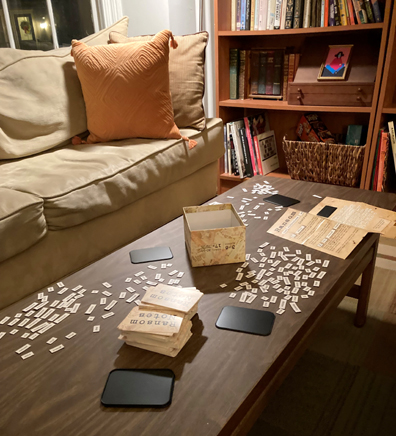 The round begins when a prompt card is flipped. Players then have 60-90 seconds to come up with a response using their magnet tiles (note: I played this game with my 13 and 10 year-old, and we extended that period to 2-3 minutes). When the time’s up, everyone shares their ransom note! The results prompted much laughter. Here’s one of our rounds: 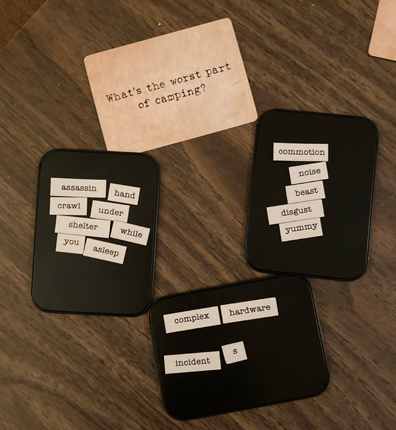 With the results revealed, a Judge is selected (and there’s a new judge every round). You can decide who judges the round, or – and I really like this – you can spin the bottom of the game box on the table. One side has “you’re the judge” printed on it, and whoever it lands facing is the Judge! 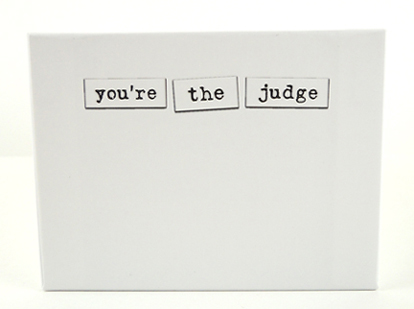 The Judge picks the winner of the round, and the winner is awarded the prompt card. The next round begins, and the game ends when one person has won five prompt cards total. The Judge can pick themselves to win a round, but the rest of the players must unanimously agree.

In summary, Ransom Note is really funny and we enjoyed it!  It’s simple to play, and there is a whole lot of creative writing happening. The prompt cards are hilarious and unusual. The game box states Ransom Note is intended for ages 17+ but that mostly refers to some of the more adult prompt cards. Those can easily be removed from the deck if you’re playing with younger kiddos. My only quibble is that the magnet words don’t always adhere to to metal game cards very well. But you only have to use them for a short amount of time, so eh…it’s fine.