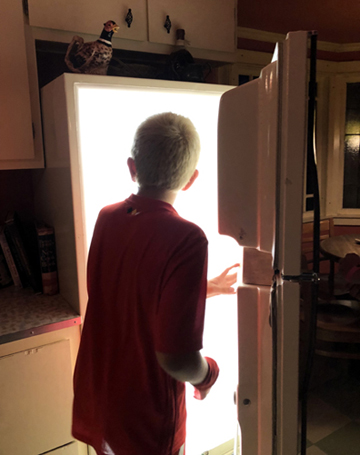 Art museums, science centers, parks, zoos, aquariums – these places share a common thread in that they are fully immersive environments that encourage individuals to follow his/ her/ their own path, exploring, discovering, and learning.

Take the concept of immersive learning and infuse it with powerful storytelling, artistic expression, unbound creativity, and fierce playfulness. Then crank it to eleven. THAT is Meow Wolf. Katie and her son recently discovered Meow Wolf in Santa Fe, New Mexico. Take it away, Katie!

Meow Wolf: House of Eternal Return. Crazy name for an art exhibit, right? Turns out it’s not only crazy, it is a hands-on, completely captivating, artist inspired, mystery to be solved, fantastical world, storytelling experience that’s *really* hard to explain to someone who hasn’t been there. With that said, I’m going to try to explain it, because I was absolutely blown away by this place. 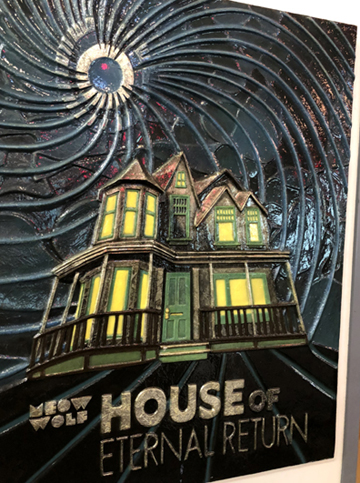 Some history about Meow Wolf: it was formed in 2008 by a group of 12 artists living in Santa Fe, New Mexico, who chose their name by literally pulling words out of a hat. Now operating as an art collective of nearly 200 people, they create unique art experiences for audiences of all ages, or as they so wonderfully describe their vision on their website: “Meow Wolf champions otherness, weirdness, challenging norms, radical inclusion, and the power of creativity to change the world.”

With support from Game of Thrones author and Santa Fe resident George R. R. Martin, who purchased a defunct bowling alley and leased it to the group, Meow Wolf turned the once forgotten building into a permanent art exhibit, House of Eternal Return, which opened in March 2016. 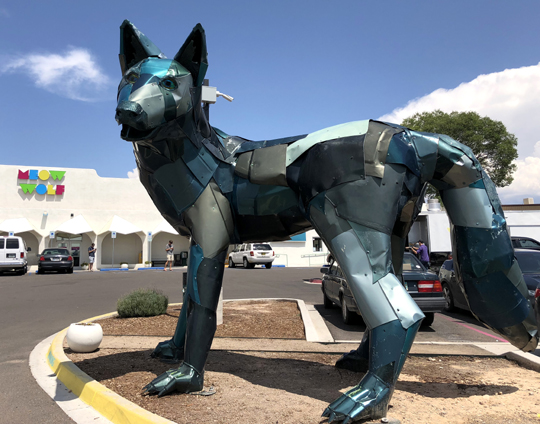 Employees working the House of Eternal Return ticket counter encourage you to touch everything, explore everywhere, and fully engage yourself within the over 20,000 square foot exhibit.

When you enter, you are immediately greeted by a massive two-story Victorian mansion owned by the fictional Selig family, who vanished after conducting forbidden experiments inside the home. If you look closely at the house, you’ll see small credits given to George R. R. Martin. Wolves and dragons appear in the scrawling woodwork. The front doormat reads “Beyond Here There Be Dragons.” 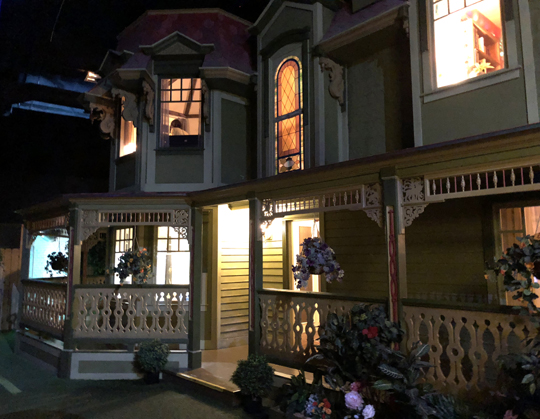 You start investigating the mystery of the Selig family disappearance by finding a mailbox and reading messages written on the cards inside. The cards provide hints and clues to search for while you wander through the maze of rooms and hallways. 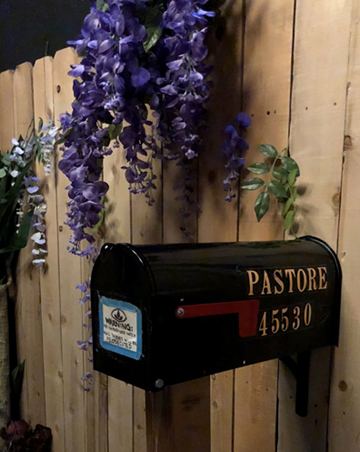 Deeper inside the exhibit, there’s a mechanical raven (another Game of Thrones nod, perhaps?), which occasionally flaps its wings and chatters at the visitors below.

My son and I spent nearly four hours wandering through the House of Eternal Return. The exhibit has dozens of hidden doors and portals to unique and fascinating places, which through the story strangely connect in some weird way to each other. Crawling through the fireplace brings you to a cave where you can play music on the rib bones of a giant glowing mastodon. 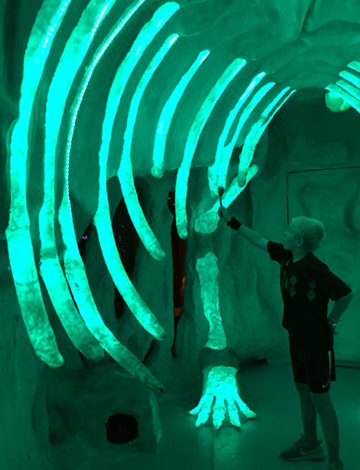 Walking through the open door of an ice machine takes you into a room full of lights and mirrors, where you push buttons to change the lights and play different notes of music. 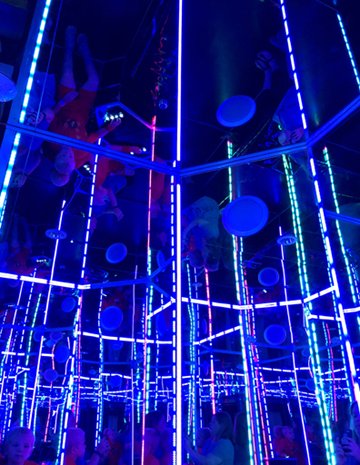 Going through the refrigerator leads you down a sterile white hallway into what appears to be a rocket ship, ready to take you to futuristic tropical destinations.

There are also strange space monsters that blink their eyes at you when you walk by. 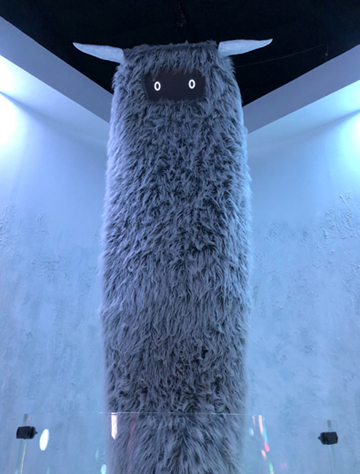 Walls of fabric that reveal an ever-changing light show when you touch it (or floss dance between the wavy cloth).

You can also try stuffing yourself down the slide portal inside the dryer, which ends in a small room with walls completely covered in laundry. For those of you wondering, yes, I did manage to squeeze my way into the dryer, much to my son’s amusement. There is another door into (or out of) the laundry room, but my son and I couldn’t figure out where it was after leaving the room. 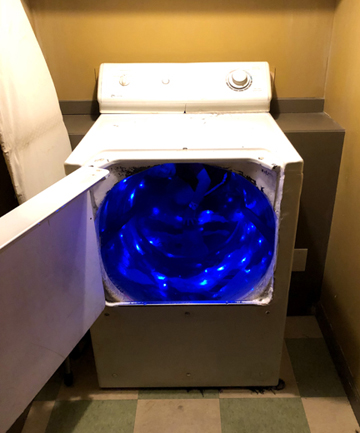 The entire exhibit is a mystery you have to attempt to solve, but honestly, I don’t believe there is one definite solution. Visitors interpret art differently, so what one person thinks is the answer, another may believe something completely different.

I can’t say enough about the House of Eternal Return: it is a must-see place. This post barely scratches the surface with all there is to see and experience. Pictures really don’t do it justice because everywhere you look, there’s something distinctly different and jaw-dropping. It’s funky and fun, inspiring and incredible. If you are in Santa Fe and visit Meow Wolf, plan on spending many hours exploring and getting lost within this one-of-a-kind immersive art labyrinth.

I can’t WAIT to go back. “Check this out!” Katie said to me one morning, holding up her phone. “My friend just posted this to her Instagram!” It was a board game, based on the book Hatchet, designed by Quinn Densmore, a 5th grader in New Mexico.

First of all, wow. Hatchet is a fantastic book. Second of all, WOW! Quinn’s game board was 3-dimensional! Thirdly, what amazing muse inspired him to create a game version of the book? The answer was Kandice Tomanek, his teacher. Clever Ms. Tomanek invited her class to design board games based on their favorite books. I asked if she would be willing to share a few more creations. The whole class voted for their Top 5, which I am delighted to present to you today, in no particular order. Dice rolls move 4 players around the board. Some squares contains a symbol, others a number. If you land on a marked square, you must pick a card with the matching symbol or number and follow its instructions (be they good or bad). The game ends when a player reaches the “Finish Zone,” but the winner is the person who has collected the most gold balls.

I love the way the game board opens into Mermaid Lagoon and Pirate’s Bay. I love that all the famous Neverland landmarks are there. I love the ring of clouds around the top of the tallest mountain. I love the gorgeous compass. And I especially love the upended mermaid tails in the lagoon! The goal of this game is to get rid of as many gems as you can before reaching the finish line (i.e. the “Pennies for Potions” square).  No small feat considering that each player starts with 50 gems! As you travel the board, you can either gain or lose gems depending on the space you land on and the cards you draw.

I’m not familiar with the Upside-Down Magic books, but I can absolutely appreciate that the game players are characters from the books (such cool little wooden boxes for each of them!). I also appreciate the math involved as you navigate the board and acquire and lose gems. That and Kitten Ball in the Gymnasium. I need to know what Kitten Ball is!

THE LANDS BEYOND
Designed by Greta Smith

So, how much do you love that beautiful purple tollbooth? And the innovative take on dice roll navigation? As you get close to the Mountains of Ignorance, you’ll notice that the cards change from “Pick a Card” to “Demon Card” as well. So clever. And did you notice the Mathamagician’s pencil?

I can’t resist sneaking a couple Phantom Tollbooth connections in here. Click here to meet the author, and click here to visit Digitopolis, the city of math. The object of this game is to get rescued from the wilderness. As you move around the board, you acquire different cards. If you get a fire card you are immune to 1 hypothermia card.  If you get hit by a disaster, you must do what the card instructs (move back, lose a turn, etc.). If you get a rescue card, you are safe from the next attack card. Collect 5 rescue cards, and you win!

Not only is this board a total work of 3-dimesional art, I think Quinn really captured the uncertainty of Brian’s plight in the game play. Because sometimes Brian was just plain unlucky (plane crash, gut cherries, extremely territorial moose). Also, there’s no finish line. You wind your way back and forth through the wilderness until (hopefully) you are rescued. Very cool. I’ve been a Daniel Pinkwater fan since I was 9, so I was thrilled to see this classic book turned into a game. Players race each other to Hokoben City Hall. Along the way, they must follow the directions on each space (if they land on a blank space, they just wait until their turn comes up again). The winner gets to take home a little Henrietta as a pet!

The details on this game are awesome. The players are characters from the book. Rebekah’s labeled the streets, the stores, and locations. There are nods to Bozo, potatoes, the Hoboken Inquirer, and Dr. Hsu Ting Feng. I tip my hat to you, Miss Bagwell.

Many thanks to Ailey, Greta, Quinn, Rebekah, and Terra for sharing their games, and to Kandice Tomanek for organizing the vote and sending the pictures (and just for being an awesome teacher)!