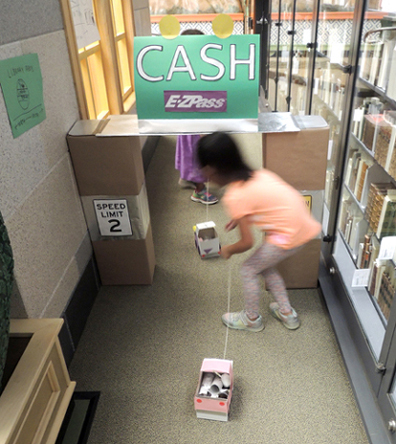 The open highway beckons, so top off the tank, jump in the truck, crank the tunes, and let the cows do the driving. Wait a minute…COWS?

We read Sakes Alive! A Cattle Drive, written by Karma Wilson, and illustrated by Karla Firehammer (Little, Brown, 2005). When two inquisitive cows lift the truck keys from Farmer’s pocket, they quickly learn (as does the rest of the town) that cows can’t drive. But they can inspire a bit of a parade!

We crafted a pull string truck and put two toilet paper tube cows in the front seat. Then the story time kids drove across scenic New Jersey, complete with billboards, pit stops, and of course…tolls. 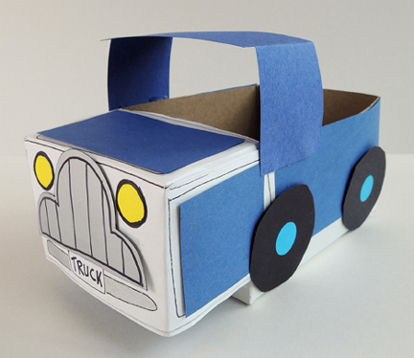 The truck for this project is a duplicate from our “Ultimate Road Trip” post (you’ll find the  instructions here) with one exception: we added a front seat for our cows to sit in. 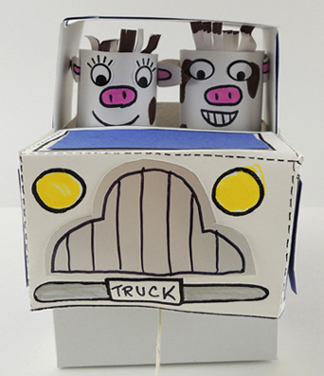 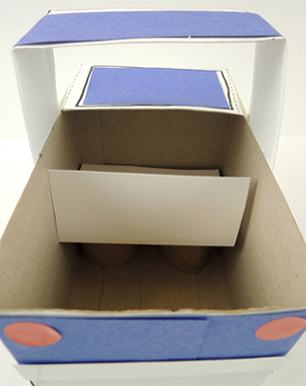 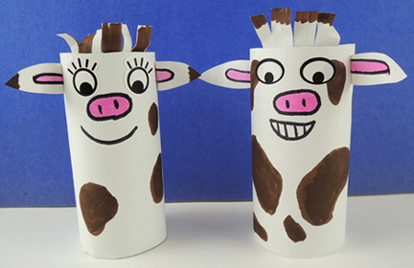 Once the truck and cows are done, it’s time to hit the road! We crafted a New Jersey road adventure, which we will share below. A simplified version of this could be print outs of buildings, billboards, and road signs. Or heck, just draw some directional arrows on Post It notes! Our journey begins at the “Welcome to New Jersey” sign… 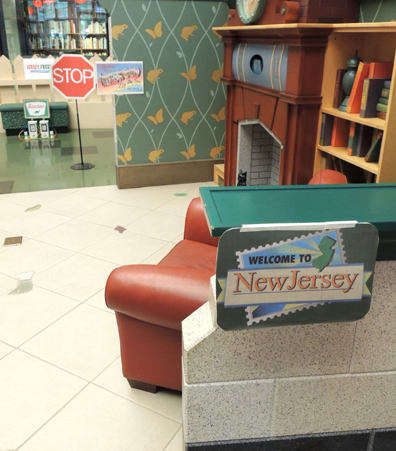 See that cute little gas station in the background? Here’s a close up of it. Katie crafted the nozzles out of mesh tubing and kiddie scissors. The pointy end of the scissors are shoved into a bit of PVC pipe. 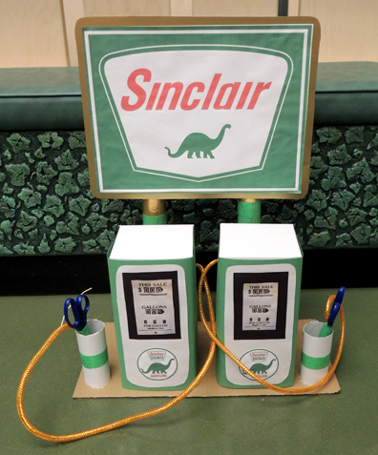 You might also want to stop at Shake Shack for a little treat. These were cotton ball shakes in little sample cups served with a snippet of paper straw. The stand was run by a volunteer older kid. 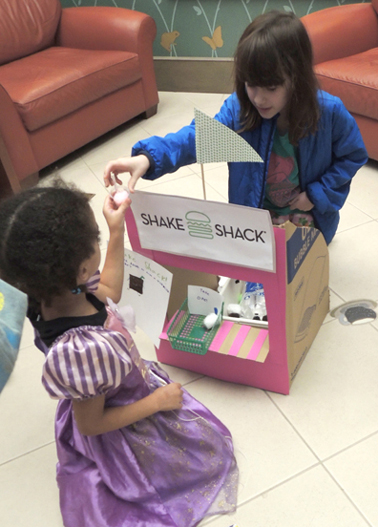 Round the corner, more billboards… 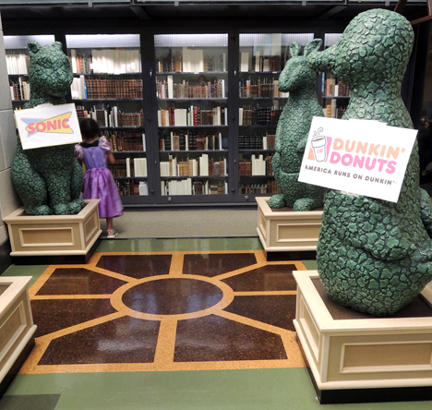 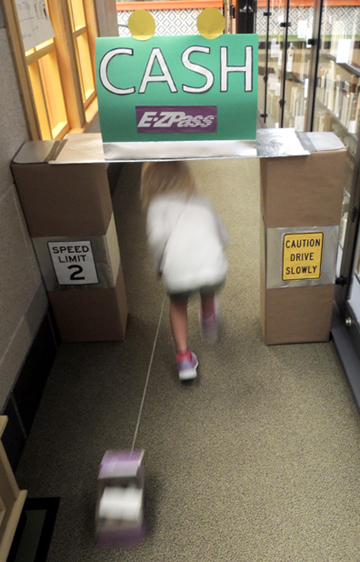 Then it’s just a quick jump onto the NJ Turnpike to begin the loop anew! 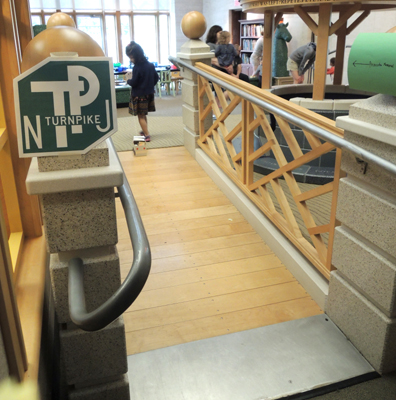 But keep an eye on your speedometer, because there was a cop on the premises to catch cows over the speed limit! This was another older kid volunteer. We had a police hat ready, some ready-to-fill speeding tickets, and a siren sound effect on my phone. 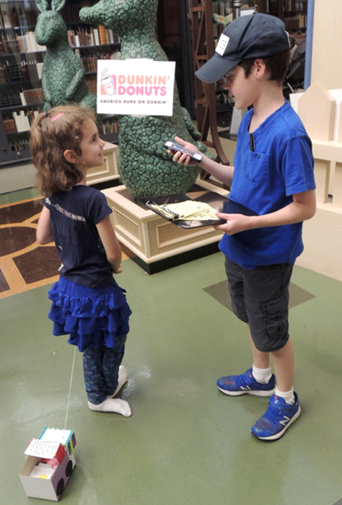 This kid played his part to the hilt, and his speeding tickets were hilarious! There was one speeding ticket for $9,000. And some double tickets. I must admit, I gave out a couple tickets too. 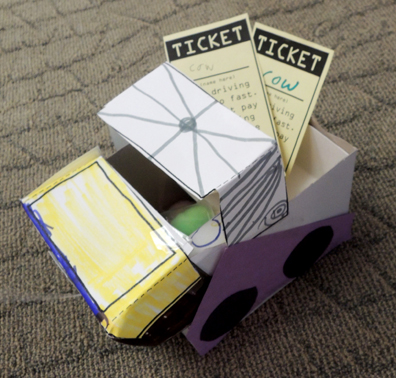 By the way…Katie you still owe me $1000 for your story time speeding ticket. Just sayin’. 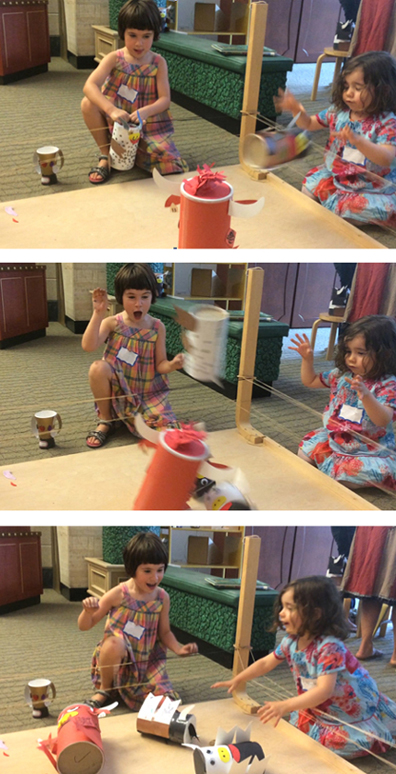 Crank up “Eye of the Tiger” and get PUMPED. Because the wrestling match is ON. Can your oatmeal container cow launch off the ropes and knock over “Big Red,” the biggest, meanest bull in the ring? A golden paper cup trophy awaits the victor!

We read Clancy the Courageous Cow by Lachie Hume (Greenwillow Books, 2006). Clancy is a Belted Galloway who was born without a belt. Because Clancy is different, he is alienated from the herd. Additionally, the Belted Galloways are caught in a vicious cycle with their neighbors, the Herefords. Every year, the Herefords win the big Cow Wrestling Contest, which earns them the right to graze on the richest pastures. This allows the Herefords to stay big and strong, and the Belted Galloways to remain small and weak. But Clancy, with his missing white belt, can sneak over to the Galloways’s field at night. He gets HUGE. He also meets Helga (a Hereford with no white spots). When it’s time for the annual Cow Wrestling Contest, Clancy wins! But as they Belted Galloways chase the Herefords from the field, Clancy and Helga speak up. They say it’s high time that cows put aside their differences and live peacefully together. And they do!

First, your cow. Use construction paper to wrap and decorate a small oatmeal container. In the book, Clancy and Helga have a baby named Clanga who is brown, white, and black. So that’s what we went for. 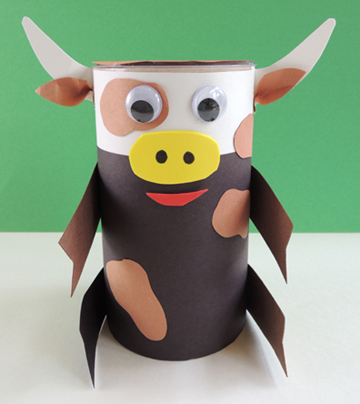 Since the cows are going to get pretty beat up in the ring, I recommend using poster board for the horns, arms, and legs. We attached these with hot glue. We also did a self-adhesive foam nose and mouth, and wiggle eyes (but you can just draw these on with markers).

Your cow needs an massive opponent, so, in this corner, we have…Big Red! I made sure to use a large oatmeal container to accentuate the size ratio. 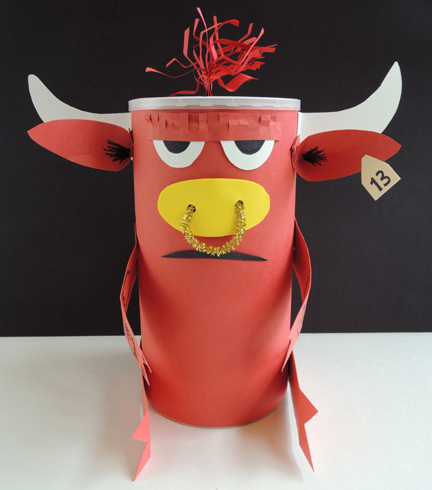 Big Red is constructed the exact same way as the smaller cow except that he has a sparkle stem ring through his nose, an ear tag, a mohawk, and tattoos on his arms. 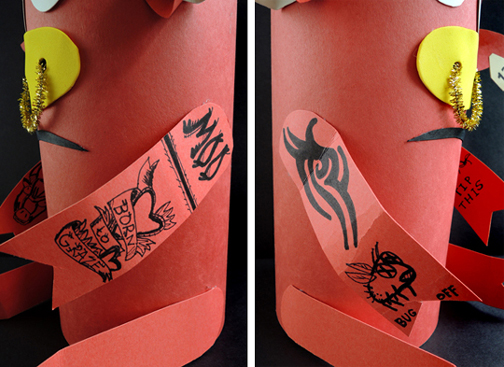 Your cows are finished, now for the wrestling ring! The ring is basically an up-ended table with 8 rubber band ropes. Our table was 4′ x 4′. I strongly recommend using a table with fixed legs. Even a table with locking folding legs might not be able to withstand the pressure of cows being launched repeatedly from rubber bands. Here’s our table, in progress: 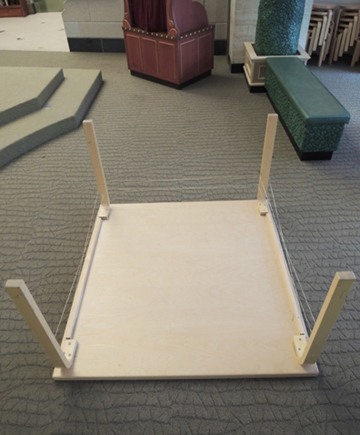 I had some huge 6″ rubber bands that I looped together to make the ropes, but smaller rubber bands will work too (it’ll just take a little more time to put them together). Make sure you have extra rubber bands on hand too, because we had a couple snap during the wrestling frenzy.

Once you have 8 rubber ropes, slip the first 4 ropes over the legs of the table, placing them about 6″ from the bottom of the table. The second layer of ropes should be about 9″ from the table top. To “wrestle,” pull your cow back on the rubber bands, then release it, slingshot style, towards Big Red. Here’s Marissa with the demo:

Did the kids have trouble operating the slingshot? Yes, at first some did (and we gave them the option of just throwing their cows into the ring). But after some practice and a little coaching, they learned fast. There were lots of excellent moves… 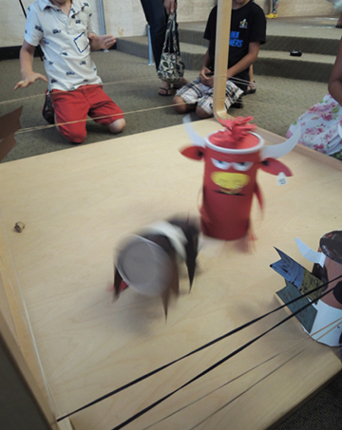 “No Cow Left Behind” 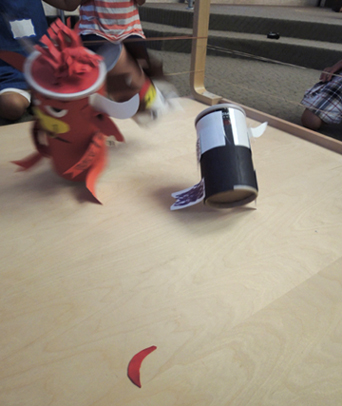 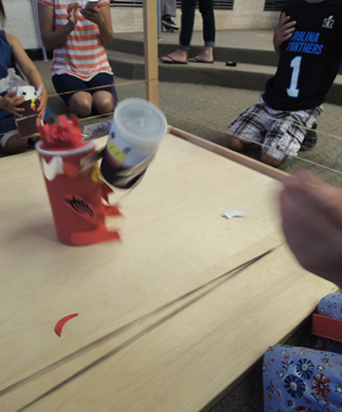 While the kids were wrestling, Marissa set up a trophy decorating area. To make a trophy, cut a black paper cup down to 1.5″. Flip it over, then hot glue a gold paper cup to the top of it. Add a pair of metallic poster board handles with tape or hot glue.

As kids finished in the wrestling ring, they came to the trophy area to celebrate their victories and decorate a trophy. We had metallic markers and plastic gemstones on hand. We also had sticker labels so kids could customize the trophies with their cow’s name. 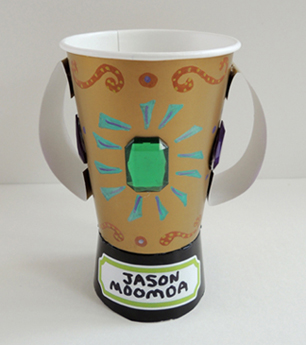 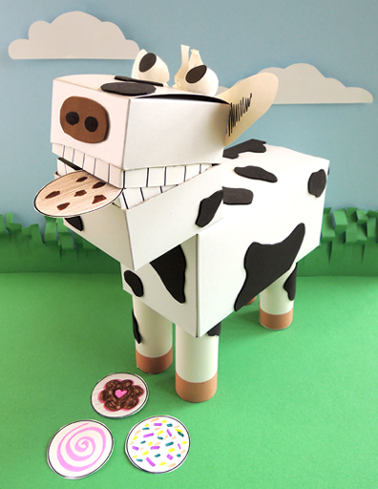 Do cows and cookies go together? You bet. Especially in this matching and sequencing game we created, complete with a grinning, cookie-eating cow!

We read The Cow Loves Cookies, written by Karma Wilson, and illustrated by Marcellus Hall (Simon & Schuster, 2010). All the animals on the farm enjoy their daily fare. Horses eat hay, the chickens enjoy chicken feed, and the hogs dig enthusiastically into slop. But the cow gets (and LOVES) cookies! Why? Everyday, the farmer and the cow share a picnic, and finish the meal with cookies (which he provides) and milk (which she provides). The clever rhymes make this a super fun read-aloud. By the end, the kids were all joining me in the refrain, “But the cow LOVES cookies!”

First, the cow’s head. Use a box cutter to slice 3 sides of a small box. The uncut 4th side of the box is the hinge of your cow’s mouth. Use a black marker to draw “tooth lines” on 2 strips of white card stock, then attach the strips to the upper and lower parts of the mouth. 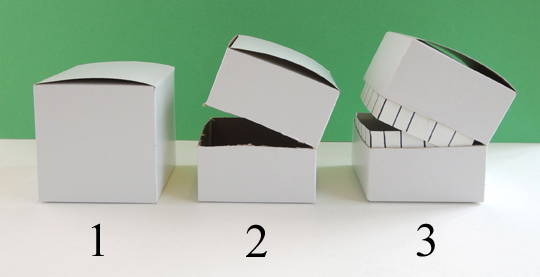 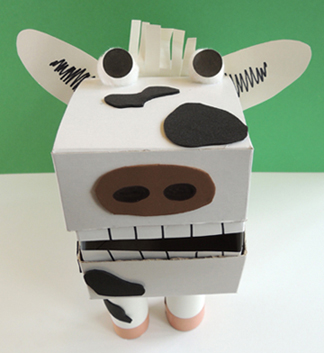 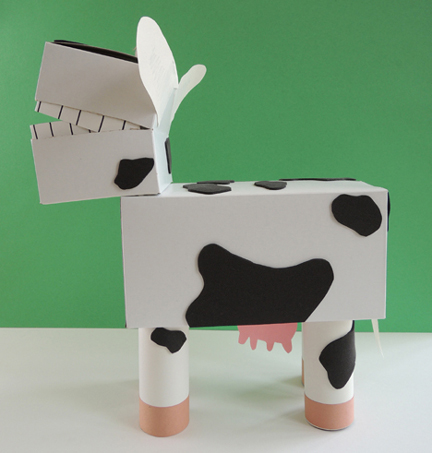 The final step is to cover your cow with spots. We used sheets of self-adhesive foam that the kids cut into customized spots, but construction paper is also an option. I definitely recommend offering a rainbow of spot colors – the results are fantastic. Check out this pink and white cow with the heart spot on her flank! 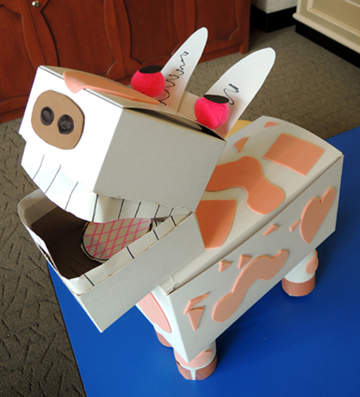 The cow is finished, now for the cookie matching and sequencing game! Here’s how it works. Cut 4 white circles from the template, then use markers to decorate each circle like a cookie. All the cookies needs to be different.

Cut the rest of the template into 5 strips, making sure that each strip contains 4 cookie circles. Decorate the strips with different cookie sequences. All the strips should be different (and it’s totally OK if you don’t decorate all 5 strips). 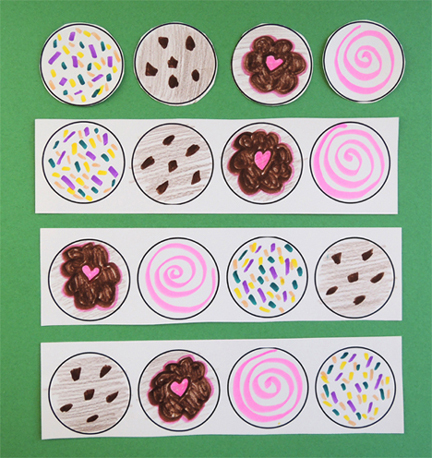 To play the game, randomly select a cookie strip. Match your cookie circles to the sequence on the strip, and then feed the cookies to the cow in that order. When done, remove the cookies from your cow’s mouth, select a different strip, and play again! You can play the game at your own pace, or have a countdown from 10 to make it more challenging. Another option – place the cow on the other side of the room, so you have to run back and forth from the cookies to the cow!