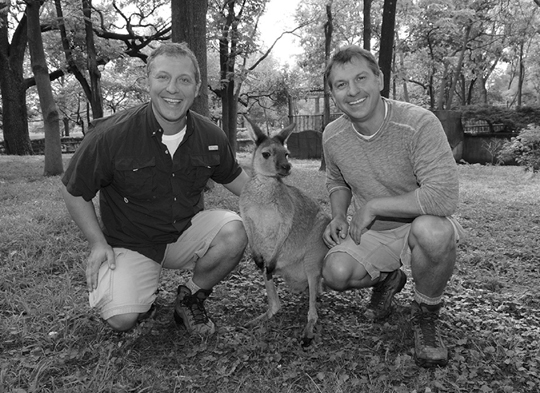 Just posted! An interview with Martin Kratt from the popular PBS Kids animated series Wild Kratts. Along with his brother Chris, Martin writes, directs, and stars in the show.

Wild Kratts is best described as a blend of zoology, biology, science fiction, and comedy. Team Wild Kratt consists of brothers Martin & Chris, engineer Aviva, communications expert Koki, and pilot Jimmy Z. The team is on a constant global road trip as they visit and observe creatures in their various habitats. Martin and Chris can also become the creatures with the help of their high tech Creature Power Suits. By touching the creature and pressing a chest disc, the brothers transform into slick, stylized versions of mammals, reptiles, birds, and insects. Along with the animated portions of the program, there are live action segments in which Martin and Chris introduce the real creatures and habitats featured in the program.

In addition to Wild Kratts and their live national tours, the Kratt brothers have produced a number of award-winning nature shows including Kratt’s Creatures, Zoboomafoo, and Be The Creature. Wild Kratts has earned them three daytime Emmy nominations for “Outstanding Writing in a Children’s Series.”

The Kratt Brothers are informative, fun, and completely engaging. They have an intrinsic talent for making non-fiction exciting and inspirational. From the smallest insect to the largest mammal, their enthusiasm for creatures is genuine and infectious. I can honestly say I see the creature world in a completely different light after enjoying several seasons of Wild Kratts with my children.