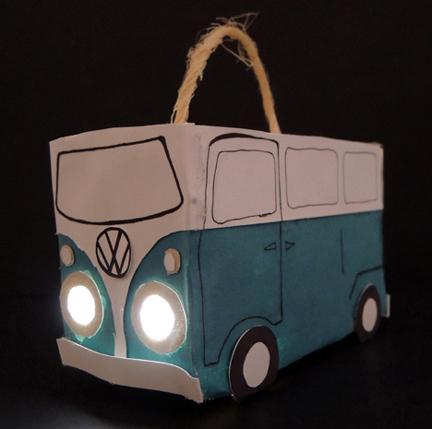 We recommend Night Light by Nicholas Blechman (Orchard Books, 2013). A charming blend of numbers, vehicles, and a guessing game, the book flips between night and day. The solid black pages only reveal the dotted lights of a vehicle, along with a textual clue (ex: “5 lights, cleaning day and night?”). Following each night page is a day page in which the identity of the vehicle is revealed. Fantastically fun.

First, use construction paper to turn a small box into your favorite vehicle. Marissa did a twine carrying handle on her awesome VW van, but you can also make a handle out of construction paper or a pipe cleaner. Next, use a box cutter to create a pair of headlights at one end of the box. Inside the box, tape a piece of white printer paper, tracing paper, wax paper, or parchment paper over the headlight holes. This gives the headlights a nice diffuse glow. 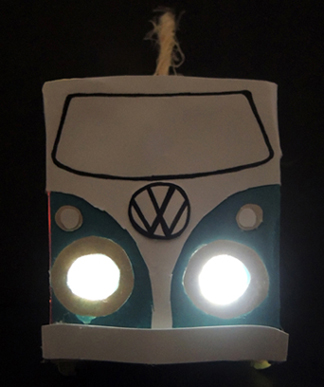 We used a submersible LED to light Marissa’s van. You can find them in the floral section of Michaels craft store – 9 cost $21, but I always use a 40% off coupon. 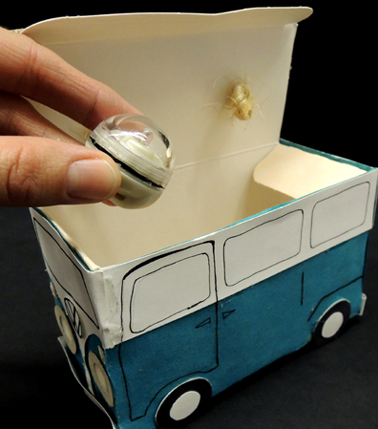 If the LEDs are too pricey, a glow stick will do the trick. Drop the illumination of your choice in the vehicle box, close the lid, and you’re done. Vroom vroom vroom! 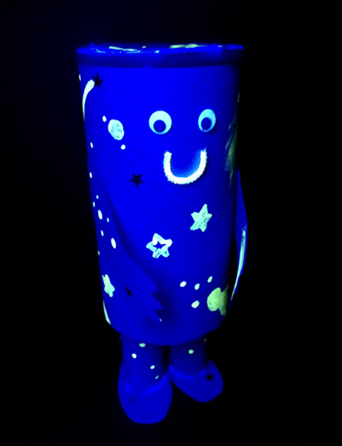 Afraid of the dark? Nah! With this fantastic, illuminating friend, you can discover how much fun the dark really is! And if you’re still not convinced, join us for a glowing balloon bounce bonanza!

We read Orion and The Dark by Emma Yarlett (Templar Books, 2015). Orion is scared of everything, but he’s especially scared of the dark. Imagine his surprise when one night, the dark comes alive and drop right into his room! It turns out the Dark is actually a fun and playful friend. Together, they explore Orion’s house and town and he learns that the things he was afraid of…aren’t that scary. They’re actually kind of cool! In the grand finale, Orion and the Dark endeavor to conquer Orion’s final fear – outer space. Far from scary, outer space is simply magical. The friends return to Orion’s house just as dawn breaks. The Dark must go, but he promises to never be far away. In fact, he’ll be back every night for a visit! 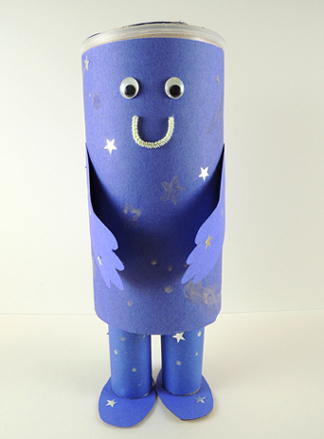 Begin by wrapping a large oatmeal container and 2 toilet paper tubes with blue construction paper. Set them aside for a moment. Cut a pair of oval feet (our were approximately 2.25″ x 3.75″), then cover the tops of the ovals with blue construction paper. Hot glue the feet to the bottoms of the toilet paper tube legs, toggle the legs a bit to get the balance just right, then hot glue them to the bottom of the oatmeal container.

Now to add the glow! We had a bottle of this non-toxic glow pigment in the cabinet, so we went with glow glue. I’m sure you’d also get great results with glow-in-the-dark paint as well (it’s sold at Michael’s Craft Store for $3 – $5 a bottle). We covered our work tables with paper, gave each kid a little cup of glue and a paintbrush, and let them create a night sky on their projects. 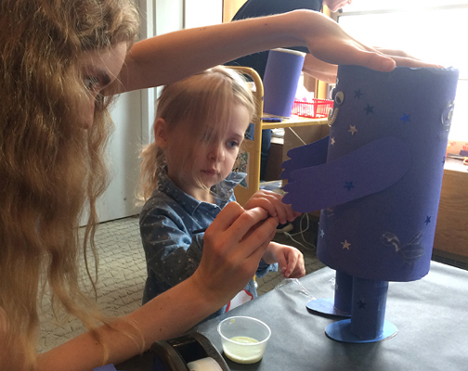 The neat thing about the glow glue is that it dried semi-clear, so there’s a bit of a dramatic reveal when it illuminates: 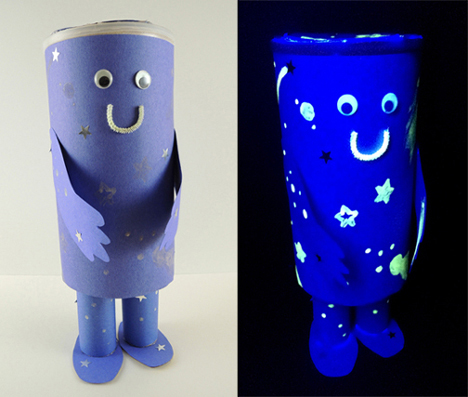 Notice how the eyes and mouth of the project are glowing too? Those are glow-in-the-dark wiggle eyes (available through Oriental Trading Company – a pack of 100 is $3) and a snippet of white pipe cleaner painted with glow glue. We were dubious at first, but the glue stuck to the pipe cleaner very nicely and dried quickly. It also stuck to Katie’s hands, giving her awesome alien fingers. 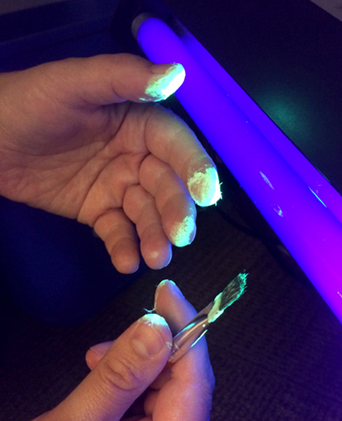 While the kids’ projects were drying on the tables, we decided to capture the spirit of the book by having lots of fun in the dark. We blew up a bunch of LED balloons (which you first encountered in this post), turned out the lights, blasted some Enya, and had a big, glowing balloon bounce party. 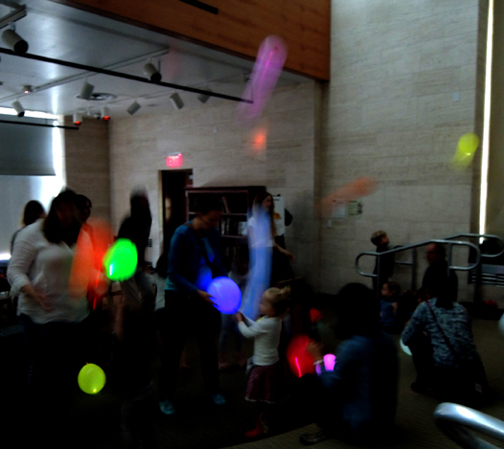 We also had a little black light closet set up, so kids could get a preview of what their creations would look like later than night. 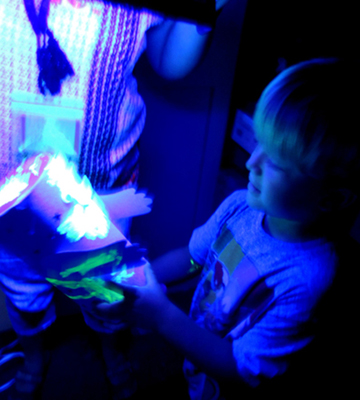 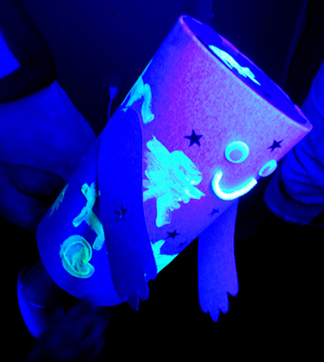 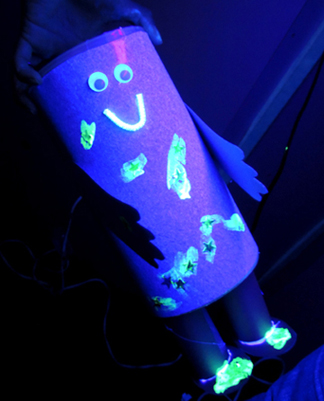 Some of the balloon revelers ended up in the black light closet too. Because why not? 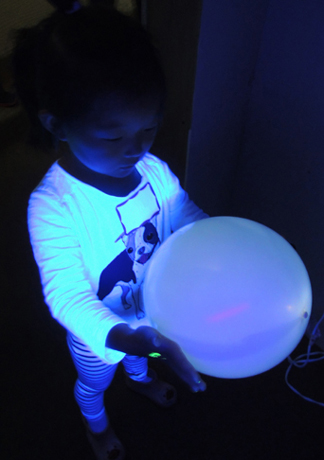 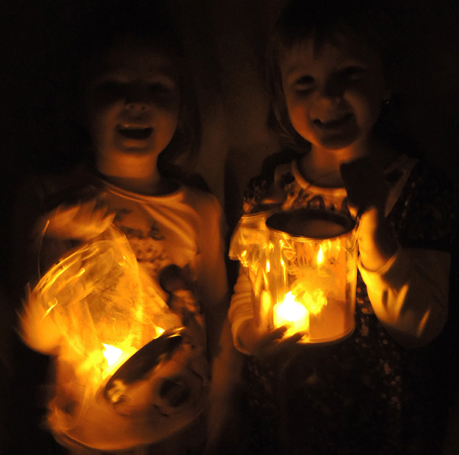 Twinkle twinkle little light! Are your ready for your journey to dreamland? This beautiful lantern and dream friend will help guide you on your way! 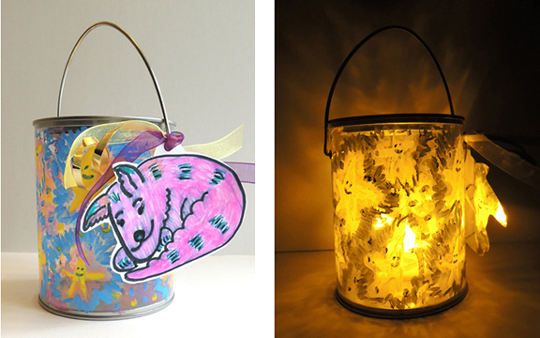 We read Dream Friends by You Byun (Nancy Paulsen Books, 2013). Melody has a very special friend…a dream friend. They fly, play hide-and-seek, have marvelous adventures, and watch fireworks. But only in her dreams. In reality, Melody is a shy girl in a new neighborhood. Since her dream friend can’t leave her dreams, Melody decides to close her eyes and imagine her friend is with her. While dancing on the playground, Melody draws the attention of another little girl who asks to join her. Soon, the whole playground is dancing with Melody. Magical!

A bucket container (also sometimes called a craft container) is constructed of plastic and metal. It’s meant to hold party favors, candy, etc. I purchased mine from Oriental Trading Company. You can purchase them individually at Michael’s Craft store. 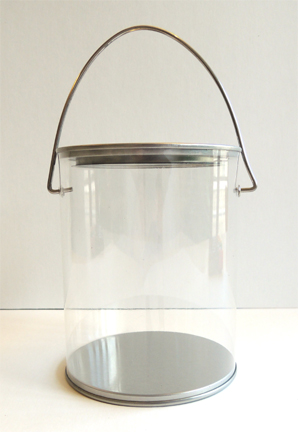 To begin this project, use regular markers to draw a “dream friend” on the back of the mirror board (i.e. the white, non-reflective side). You could use white card stock instead of mirror board, but the mirror board is fantastic at reflecting the light of the lantern in the dark.

When cutting out your dream friend, make sure to leave a little tab at the top. Punch a hole through this tab (and round the edges if you’d like). This is where your ribbon will go later.

Now for the fun part. I dropped a twinkling LED votive in each container, darkened the room, put on a lullaby CD ( I highly recommend Sweet Dreams: Lullabies for Guitar by Nina Gerber), and the kids used window markers to decorate the exterior of their containers. The room was full of excited yet peaceful kids, decorating away amidst mellow, glowing lanterns. 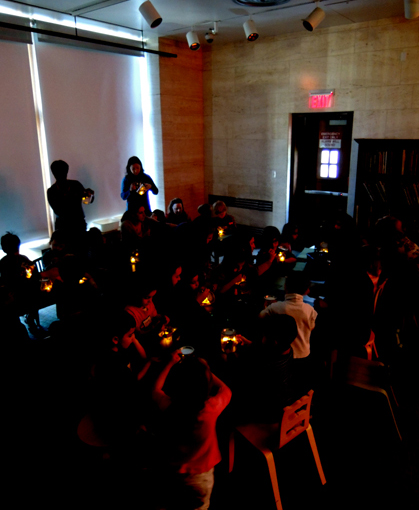 A tip about window markers. I purchased this brand from Discount School Supply (alas, there is no purple marker in this set). I know from experience that this particular brand works on glass AND plastic. 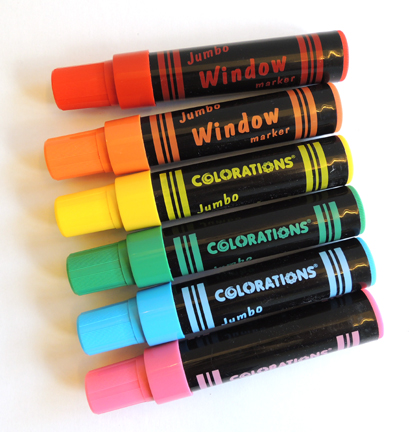 You have to draw slowly with window markers and allow them a little time to dry (about 30-45 second). Once they completely dry, then you can go back over them with another color. Otherwise, they get smudgy. So if you want to draw little stars with smiley faces like mine, just wait 30-45 seconds before you use the blue marker to draw the face on the yellow star. 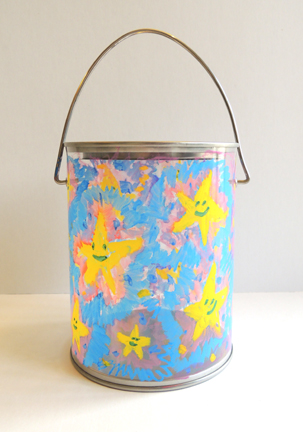 To complete the project, thread some shimmer ribbon and gold curling ribbon through the punched hole in the dream friend, then tie to one side of the lantern. Sweet dreams! 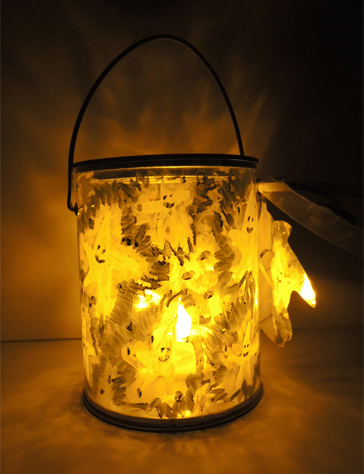