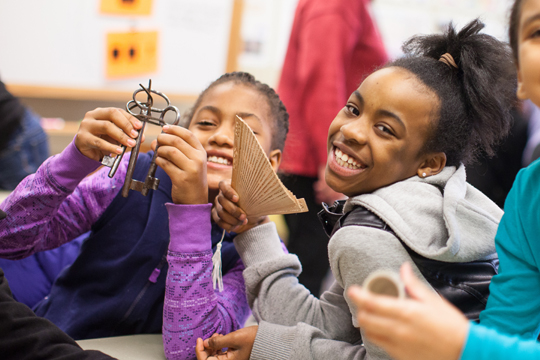 For me, literacy education encompasses both fiction and non-fiction subjects. I’ve already chronicled some of my adventures in science (check out these posts on chemistry and Rube Goldberg engineering, these projects on butterflies, buoyancy, and creative construction, and this science kit review by our kid tester). Today, however, I want to focus on history and relate a fantastic hands-on experience that inspired me over 14 years ago.

In 2001, I was a graduate student at the University of Virginia, happily enrolled in a “Museums and Education” class taught by Professor John Bunch. Part of the class was lecture-based, but another part class involved field trips to various museums and historic sites to get a tour and learn more about their educational programs. Once such field trip was to Monticello, Thomas Jefferson’s home in the beautiful mountains surrounding Charlottesville, Virginia. 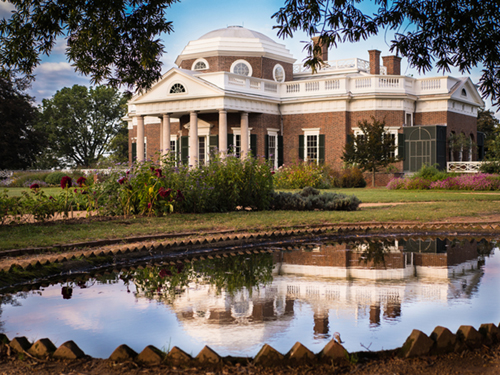 Monticello has a very active roster of programs for adults and children alike, but I want to share one ingenious activity my class was invited to experience during our tour. The activity is intended for elementary school group visitors to Monticello.

The activity begins with the students sitting in groups at tables. Each table is given a recreated “historic pocket” (it could be a leather wallet, a burlap bag, an embroidered linen pouch, a basket, etc.). Inside each pocket are various objects representing items that the pocket’s owner would have used in his or her daily life at Monticello. Students are invited to examine the objects (touching is not just permitted, it’s encouraged!). Then they engage in a discussion with a Monticello staff member to determine: 1) What the objects are; 2) How they were used; and 3) What the objects tell about the person who owned them. 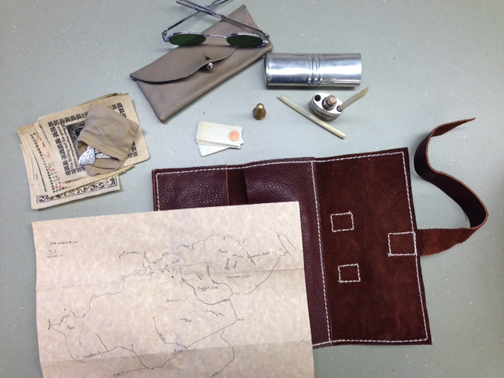 From examining these objects, the students learn that Jefferson was literate, wealthy, and the owner of the plantation. They’ve learned it by touching and exploring the objects – holding a quill pen, looking at a map, jingling replica coins in their hands.

Even better, the educators at Monticello don’t just offer one pocket. They have several! In addition to Thomas Jefferson’s pocket, students explore recreated pockets representing members of Thomas Jefferson’s family, including his children and grandchildren, and members of the enslaved plantation community, such as Edith Fossett and her husband, Joseph Fossett.  By exploring a variety of pockets, students can compare and contrast the lives of different individuals, and the various roles they played at Monticello.

Here, for example, is the Fossett Family pocket, which represents Edith Fossett, Joseph Fossett, and their children: 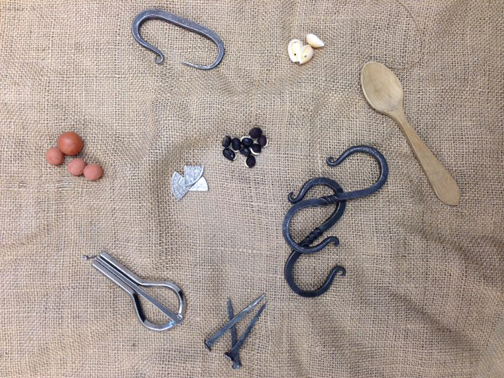 Students learn that Edith and Joseph Fossett were slaves at Monticello – Edith was chief cook, trained in French cookery at the President’s House in Washington D.C., and Joseph was foreman of the blacksmith shop. Being slaves, they were not paid for their work. So why are there some small coin pieces in the pocket?

Interestingly, Joseph Fossett received a small portion of the blacksmith shop’s profits, and sometimes took paid work on the side.  Joseph Fossett was one of only five slaves freed in Thomas Jefferson’s will and started a business in Charlottesville.  Using money he earned, he was eventually able to buy his wife and some of their eight children out of slavery and move with them to the free state of Ohio. 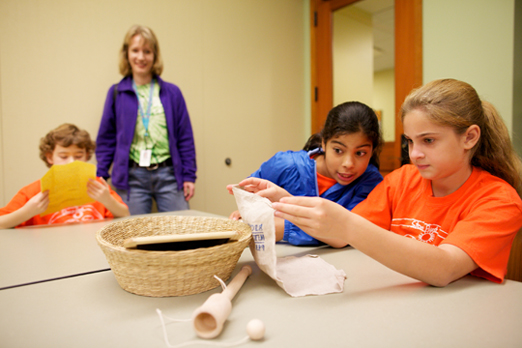 The pocket activity is only the beginning of the students’ experience at Monticello.  Next, they proceed to the house and grounds, often hearing the names of the people whose pockets they explored. The activity is very flexible and portable. Staff have taken it off site to schools and teacher training sessions.

Depending on class size and time constraints, classes will rotate to different spaces within the Education Center, exploring a different pocket—and new individual—in every room. Currently, the educational staff are taking the pocket idea and experimenting with applying its hands-on, minds-on concept to entire rooms of their Education Center and Griffin Discovery Room.

It would be interesting to apply the pocket activity to literary figures. What would Jane Austin carry in her pocket? Charles Dickens? J.K. Rowling? Why not apply this concept to the sciences? What would Einstein have in his pocket? Marie Curie?

And what about fictitious characters? I designed a modified version of the pocket activity for Cotsen Critix, our literary society for kids ages 9-12. The kids put together character wallets that included non-obvious photos, small objects, curious clues…but NOT the character’s name! Can you guess this one? 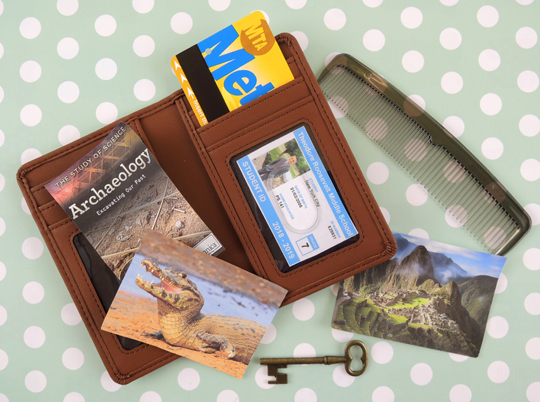 I love everything about the pocket activity. Intriguing students with a bit of mystery, handling and exploring objects, allowing time for the students to postulate the answers for themselves, comparing objects across individuals, and using the objects to launch an educational dialogue about the people, places, and experiences at Monticello. It’s a powerful lesson in history, right in your hands.

This post has made me realize that I’m long overdue in writing about the other ways in which I incorporate history into my literacy programs. For example, we had a series of 6 classroom programs that featured our library’s special collections (you can read more about that here). I’ve also found ways to bring history to life at some of our special events, including a sign that almost stole the show at a Robin Hood event, this little Medieval herbal bag, a 1963 recipe test for fudge count (that counts as history, right?), and a fantastic Victorian Tea program.

I shall get to work on more history posts, posthaste!

Many thanks to Jacqueline Langholtz, Manager of School & Group Programs at Monticello for chatting with me about this amazing program.

All images used with permission of Monticello. 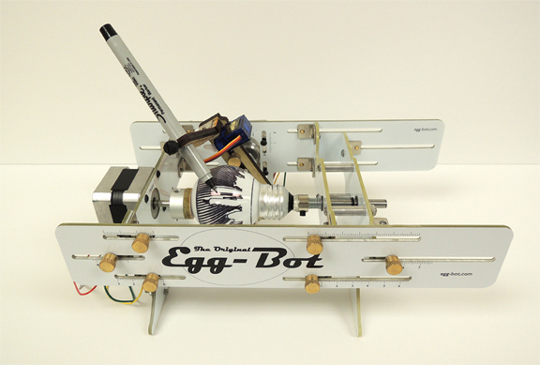 While I certainly do my fair share of fiction-focused programs, I consider non-fiction programs to be (dare I say it?) just as much fun. And for today’s adventure in non-fiction, we’re talking science!

We’ve offered some interesting science programs in the past. Take, for example, the Chemistry of Magic, in which we demonstrated the real science behind seemingly magical reactions. Or this Rube Goldberg engineering program. Or even this humble preschool story time that featured the life stages of a butterfly. This week, to get a healthy dose of vitamin “S,” I dropped in on my friends at scienceSeeds. 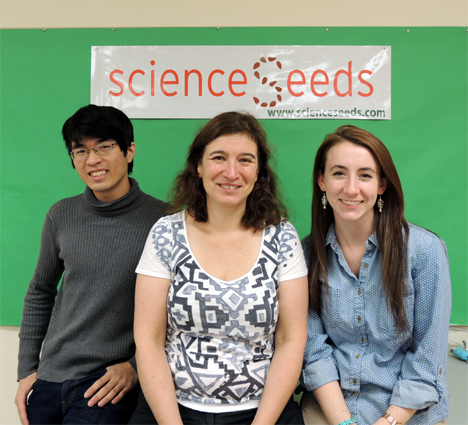 ScienceSeeds is a local science enrichment center for grades K-8 . It was founded in 2008 by Michal Melamede. While raising her children, she noticed a lack of hands-on, age-appropriate, science and engineering opportunities. So Michal decided to establish a business that would encourage curiosity, exploration, discovery, and scientific thinking.

Visiting scienceSeeds is always fun. Especially when they let me play with their toys! Here are a few of their current favorites. Perhaps one or two will inspire a little science at your next program? 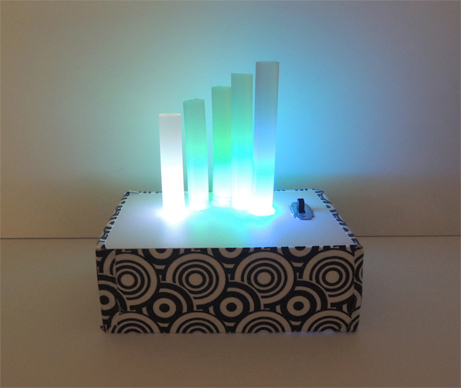 I have to start with this one because I’m such a hot glue devotee. This is an LED lamp with hot glue stick shades! It was designed by John to demonstrate circuits, fiber optics and light behavior. He used a hot glue gun to hollow out the bottom of 5 hot glue sticks, and then rigged up a series of little LED bulbs on a simple circuit. Everything was attached to a foam core base, and then the base was wrapped with decorative duct tape. I love it.

This is another project designed by scienceSeeds staff to teach hydraulics. Using two water-filled syringes and tubing, the butterfly lifts its wings up and down. The syringes are from a medical supply company, the tubing is from a science catalog, the base is wood, the wings are made from foam board, and the butterfly’s body is a clothespin. A little duct tape here and there and you’re ready to go. They also have versions with an owl, a bat, and a dump truck! 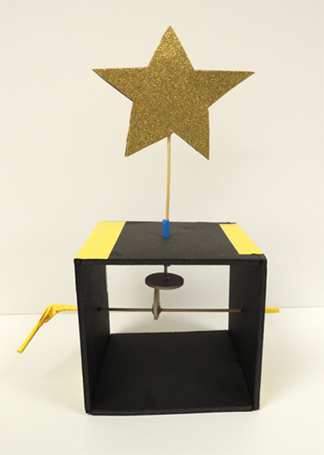 One final project from scienceSeeds’ workshop! This one demonstrates how simple machines and mechanisms work. Turn the crank and the movement of the wooden gears and rods causes the star to spin. The base is made from foam board, the sticks are bamboo skewers, and the gears are little wooden circles purchased from Michael’s craft store. A little hot glue and duct tape seals the deal.  And just look at this sweet double gear version! 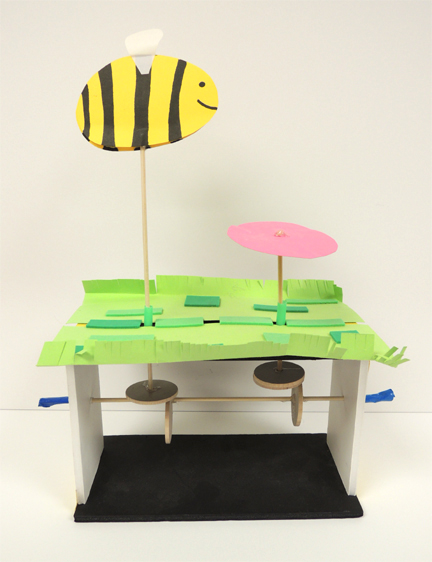 Mark my words…I’m GOING to find a way to work a foam board automataun into a story time project. It shall be done. Oh yes, it shall.

This is a recent acquisition at the workshop. It’s the EggBot, an art robot that can draw on round surfaces like eggs, light bulbs, ping pong balls, ornaments, etc. It hooks up to your computer and, with some lovely freeware, will take a design or image and put it right on your object! scienceSeeds is using it to teach CNC and automated design. Here are a couple test subjects… 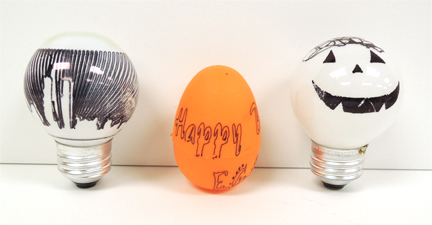 Alas, an EggBot kit like the one above retails for $219, so it’s well out of my budget. The company that sells it is called Evil Mad Science LLC. Hah hah hah! Minions not included. 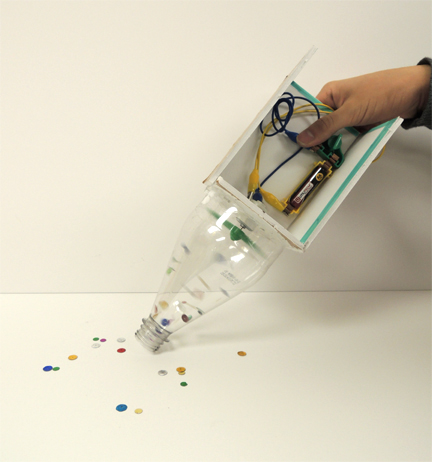 This is a modification of a cardboard kit the staff tested. They found that a 1 liter bottle and plastic propeller worked much better than a cardboard tube and propeller. The foam board base holds a simple circuit that connects to a motor. As the motor spins the propeller, it creates a wind tunnel in the bottle that sucks up pieces of confetti. It’s the perfect way to teach engineering and air flow. It’s wildly popular with the kids too. 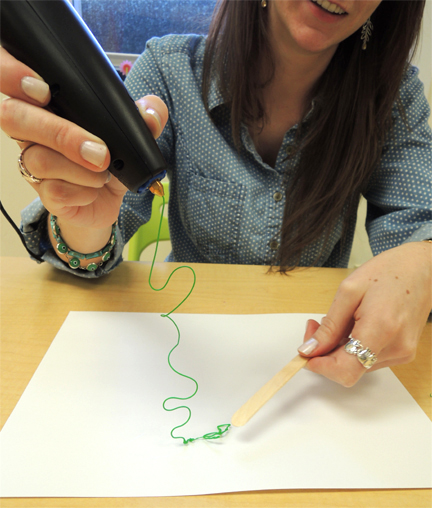 It might be a little hard to see this in the photo, but this device lets you do 3-dimentional drawings! That thin green line you see isn’t drooping down from the tip of the doodler. It’s rising up from the piece of paper and standing on its own! You insert little plastic sticks of various colors into one end of the “pen.” The plastic emerges in liquid form out the other end, but quickly hardens. With some practice, you can “draw” amazing 3D creations like these: 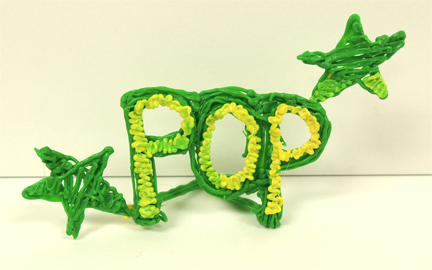 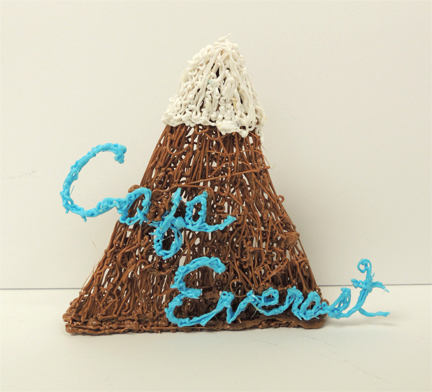 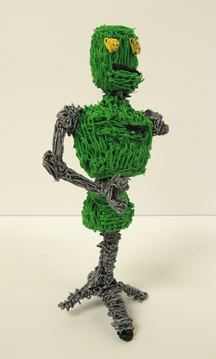 scienceSeeds likes to use the 3-Doodler for their 3D modeling workshops, sometimes in conjunction with their 3D printer. A 3-Doodler pen retails for about $100, and additional plastic sticks are approximately $10 for 25. I noticed that the pen makes a loud whirring noise while being operated (a little louder than an electric toothbrush). The staff also mentioned that after extended periods of use, you can smell burning plastic. The smell bothers some kids. But those things aside, it’s a cool little drawing tool. 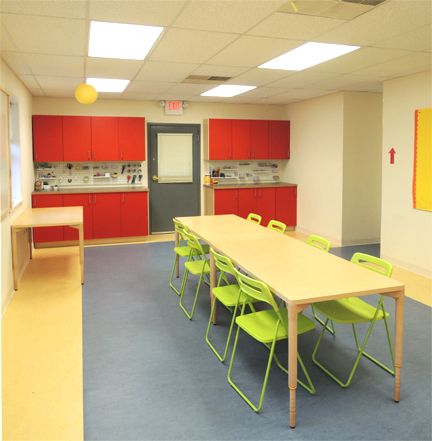