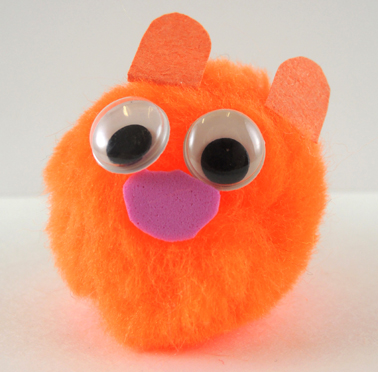 School is in session, and it appears your teacher has a new pet…that could potentially eat him. Wouldn’t you rather have a sweet little hamster? We were delighted to have author Anica Mrose Rissi visit our story time to read her book, The Teacher’s Pet. There’s an interview with Nica at the end of today’s post, AND! We’re giving away 6 signed copies of the book to YOU, our blog readers!

We read The Teacher’s Pet, written by Anica Mrose Rissi, and illustrated by Zachariah OHora (Disney Hyperion, 2017). Everyone is excited when the class tadpoles hatch. Mr. Stricter, the teacher, allows the class one tadpole to keep as a pet. Except “Bruno” isn’t a tadpole. He’s a hippo who proceeds to grow at an alarming rate and run amok. Bruno eats schools supplies, breaks desks, and snores during silent reading. But Mr. Stricter won’t hear a word against his beloved pet. Until Bruno swallows him whole. The clever class rescues Mr. Stricter, but Bruno needs to retire to a place with more room. Perhaps Mr. Stricter would like a hamster?

We made hamster cages, complete with a jumbo pom-pom hamster. Thanks to the wonder of magnets, your hamster can scurry around the cage, motor up ramps, and ring a little bell! 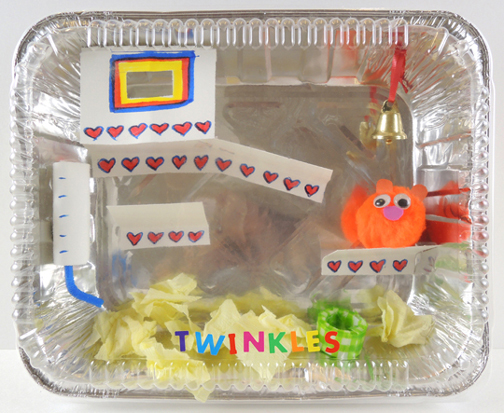 The key to this project is the container you use for the hamster’s cage. We found 10.5″ x 12.5″ aluminum food containers with plastic lids at our local dollar store that totally did the trick. Definitely opt for a larger container so you have room to attach the cage elements. Also, make sure the bottom of the aluminum container is somewhat smooth. Some are heavily ribbed, which makes it hard to keep the hamster/magnet connection going. The cage elements are simple: 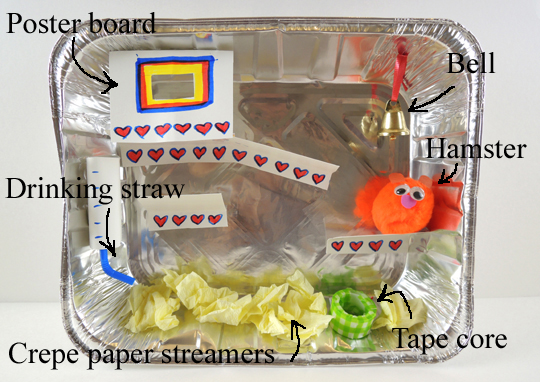 We made a water bottle out of a roll of construction paper and a snippet of drinking straw. The ramps and the little hamster house are poster board. The sawdust shavings are crumpled pieces of yellow crepe paper streamers (the clear winner out of testing a bunch of different types of paper). The food bowl is a tape core wrapped with patterned tape. And the bell is hanging from a little piece of curling ribbon.

The hamster is a jumbo pom-pom with wiggle eyes, construction paper ears, and a little self-adhesive foam nose (even though construction paper works for the nose too). Hot glue button magnets to the back of the pom-pom and one end of a wine cork and you have your hamster magnet wand, ready to go! 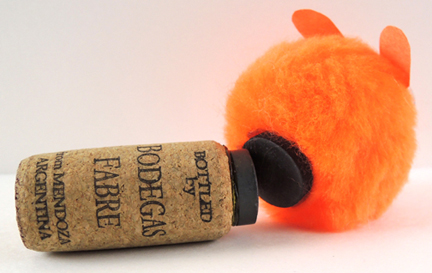 We also found some alphabet letter stickers in the art cabinet. So we encouraged kids to spell their hamster’s name on the clear plastic lid of the aluminum container. Our hamster was named Twinkles, but there was also a Sparky, Bob, Ricky, and…I can’t quite pronounce this one… 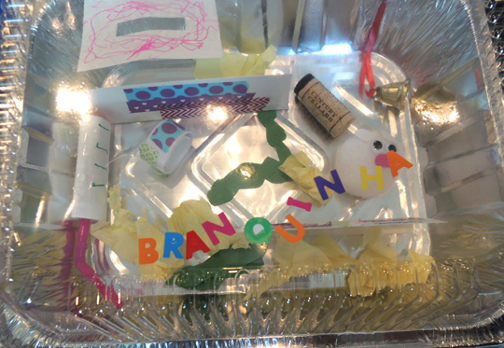 To operate your hamster, place the cork wand behind the cage, connect it with the magnet glued to the pom-pom hamster, then drag the wand to lead the hamster through all of his/her activities!

The Teacher’s Pet is fantastic and fun, and the fun multiplied exponentially when the Anica Mrose Rissi arrived to read it to us herself (whilst also sporting an awesome Mr. Stricter sweater).  Many readers know Anica from her charming Anna, Banana series, but she recently released her first YA novel, Always Forever Maybe. 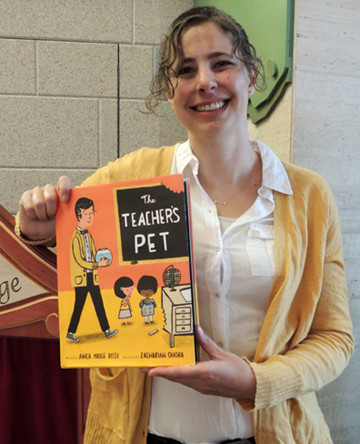 I grew up on an island off the coast of Maine, where I read a lot of books and loved a lot of pets. After college, I moved to New York City, where I worked as a book editor for more than thirteen years. Now I tell and collect stories, make up songs on my violin, and take long walks with my dog, Arugula, here in Princeton, where I’ve lived for the past three years.

Besides my picture books, chapter books, young adult novels, and essays, I also write lyrics for (and play fiddle in!) the electro-country band Owen Lake and the Tragic Loves. Princeton-area friends can see us play at two free, family-friendly shows this fall: We’ll be part of the Unruly Sounds Festival at Hinds Plaza on September 29, and we’ll be playing a record release show at Princeton Public Library on November 10, to celebrate our new album, The Best of Your Lies.

Thanks for coming to our library! What do you enjoy most about reading to kids?

Thanks for having me! Talking with kids about writing and reading is one of my favorite parts of being an author. I’m lucky to do a lot of school visits, at which the kids always ask fun and interesting questions. The best thing about reading stories to kids and talking with them about my creative process is that young kids are all creators too. I don’t know a single child who isn’t also an artist or storyteller (or both!), so the conversation is really one amongst peers. I can inspire and encourage them, but they inspire me with their creativity and imaginations too.

You’re best known for your Anna, Banana series, but The Teacher’s Pet was your first picture book. What inspired it?

The Teacher’s Pet is the story of a teacher who is so enamored of the new class pet, he can’t see all the trouble it’s causing. I wrote it because I wanted to play with the pun suggested by the title and tell a story about a teacher whose obvious favorite is an actual pet. And I was drawn to the challenge of writing it as a picture book—a medium with so much room for humor, yet space for so few words.

As for character inspiration…Mr. Stricter is perhaps the most autobiographical character I’ve written. I am not an elementary-school teacher, and I’ve never (yet) been swallowed whole (or sneezed back out!) by a creature like Bruno, but I am wildly in love with my own adorable but not always entirely well-behaved pet (the aforementioned pup, Arugula).

A fun fact about picture-book creation: Picture book authors and illustrators almost always work separately, and even though I wrote this book, I didn’t know that Bruno, the class pet, would turn out to be a [species redacted] until I saw the first round of Zachariah OHora’s hilarious artwork. When the early sketches for the story arrived in my inbox, I laughed with surprise. I never would have guessed that a tadpole would grow into a [!!!!!]. (Though I knew, of course, that Bruno would not be a regular frog.) It’s so much fun to write a story like this and get to see the extra layers—and humor—that the visual story created by the illustrator adds to the text.

This summer, you released your first YA book, Always Forever Maybe. I know you’re continuing the Anna, Banana series, releasing another picture book, and working on another YA novel. Sometimes, do you feel like you’re writing on different planets?

I feel lucky to get to write many kinds of stories for different audiences, and my brain likes to keep busy. I’m happiest when I’m working on several projects at once (though it’s best when each project is in a different stage of creation—I can’t, for example, write two first drafts simultaneously). But no, they don’t feel like different planets to me. Each story has a way it wants to be told, and when I’m writing a draft, I’m focused on figuring out the best way to tell it. That process feels both similar from book to book and wildly different. But I’m exploring similar themes across categories, genres, and age levels—almost everything I write, from picture books for kids to essays for adults, touches on ideas about friendship, animals, and love.

If you’d like to meet Anica, she’s going to be at the Princeton Public Library’s Children’s Book Festival this Saturday, September 22nd from 11am to 4pm. Go say hi!

We also have 6 copies of The Teacher’s Pet to give away, signed by Anica AND the illustrator, Zachariah OHora (who will be at the book festival too)! Just e-mail cotsenevents@princeton.edu with your name, and the name of your favorite pet growing up. We’ll put all the names in a hat and draw 6 winners at random on Tuesday, September 25th. Good luck! 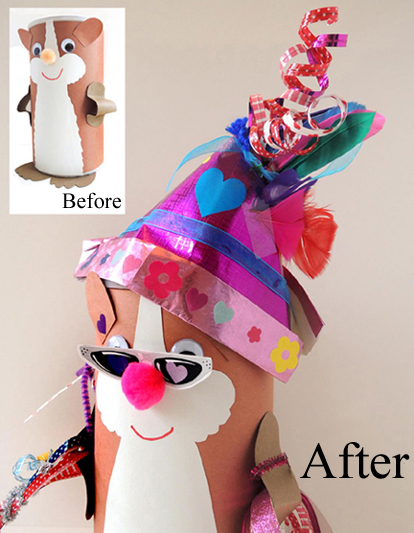 Why be a hamster when you can be…a GLAMster! With the proper hat, accessories, and a stunning pair of sunglasses, become a hamster who is sure to get noticed.

We read Glamsters, written by Elizabeth Cody Kimmel and illustrated by Jackie Urbanovic (Disney-Hyperion, 2008). It’s the big annual sale at Hamster World, and Harriet the hamster is worried that she and her sister Patricia won’t get noticed. When Harriet spots a magazine article about “glamsters” lining the bottom of her cage, she thinks she’s found the solution. She transforms herself with “high gloss-and-glo fur volumizer,” a new hat, and funky whisker extensions. Yes, Harriet’s feeling pretty glamorous until Patricia wakes up from a nap, sees Harriet, and screams. Definitely NOT the reaction Harriet was expecting. Patricia helps Harriet get back to normal and, best of all, the two hamsters get noticed by a lovely new owner. Just by being themselves. 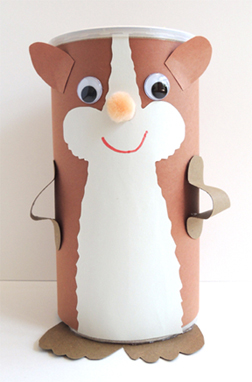 We’ll begin with the hamster. Wrap the outside of a large oatmeal container with brown construction paper. Cut the feet from a square of tagboard (or brown poster board). I cut little toes as well.

Hot glue the feet to the bottom of the oatmeal container. Next, cut the hamster’s bib from the template (the bib is the white “fur” that forms the hamster’s tummy, cheeks, and forehead). You can leave the sides of the bib just as they are in the template, or you can use scissors to cut ruffles in the sides to resemble fur. 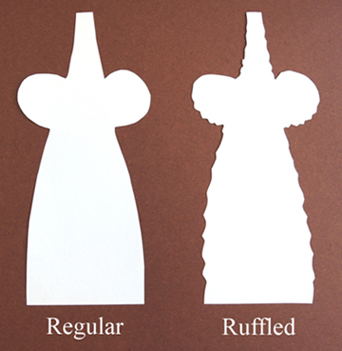 Hot glue (or tape) the bib to the front of the oatmeal container. Arms are next! The arms are  2 tagboard rectangles that are rounded at each end. 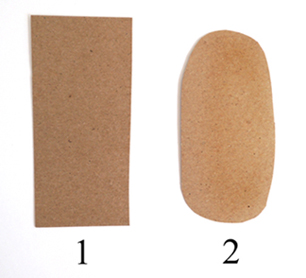 Attach the arms to the body with hot glue (or tape). Hot glue on a pom-pom nose and a pair of wiggle eyes. Use markers to add a smile. Finally, use brown construction paper to make a pair of ears, and then hot glue (or tape) them on. You’ll notice that the ears are attached on the front of the container, above the eyes, and at a slight angle. This is so the hamster’s ears won’t interfere with the hat. 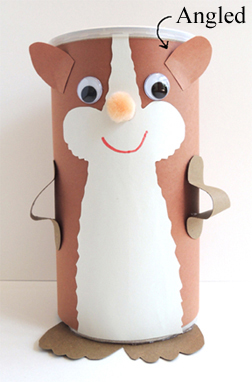 Your hamster is finished, now for some glamorous accessories! For the hat, I prepped a bunch of simple white origami hats. Start with a 9″ x 12″ sheet of construction paper: 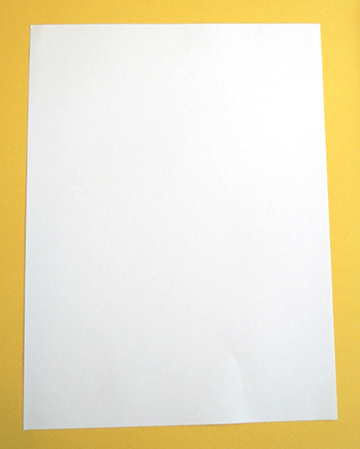 Fold the paper in half downwards 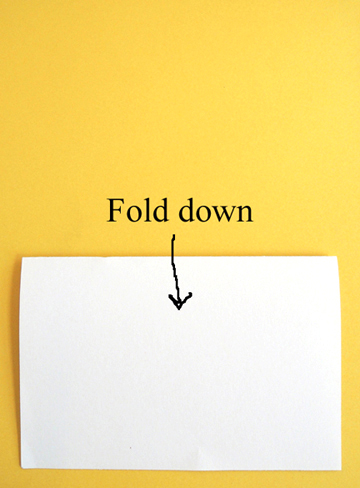 Now fold the upper right-hand corner towards the middle of the paper like so: 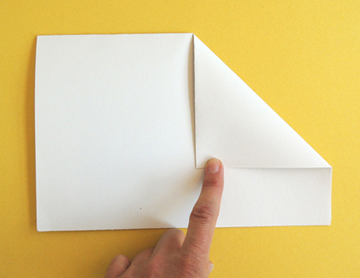 Then repeat with the upper left-hand corner. 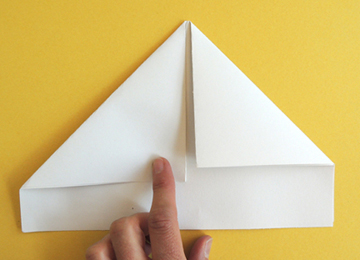 Fold one side of the bottom up 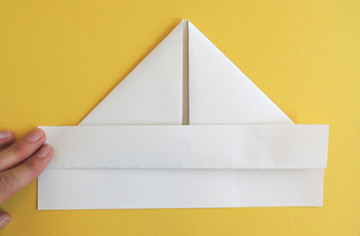 Then flip the hat over… 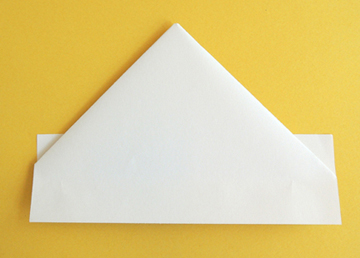 And fold the remaining side up at the bottom. 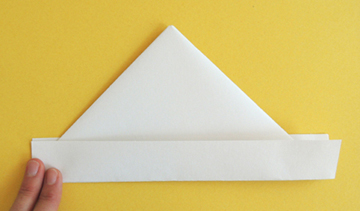 Flip the hat back over, open it at the bottom, and secure it with 2 staples. 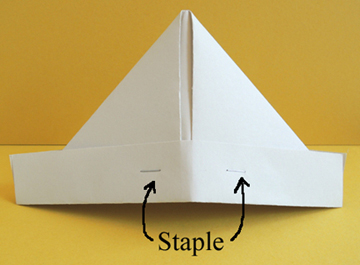 The hat is ready, let the hamster makeover commence! I offered patterned paper, embossed foil paper, sparkle stems, craft-ties, heart stickers, small feathers, and dot stickers, as well as the Bling Bin. I also tested some glitter tape out on this project. I was dubious about its claim to not shed glitter, but it actually wasn’t too bad (see my issue with glitter in the FAQs).

Kids make hats, necklaces, belts, purses, ties, briefcases, etc. The final touch, however, was a pair of sunglasses. Color and cut a pair from the template, and perch them on your hamster’s pom-pom nose. Perfect dahling.

As you can imagine, we had some super glamorous hamsters at story time. I captured a few quick poses in my photo studio, and Katie whipped up some exclusive magazine covers… 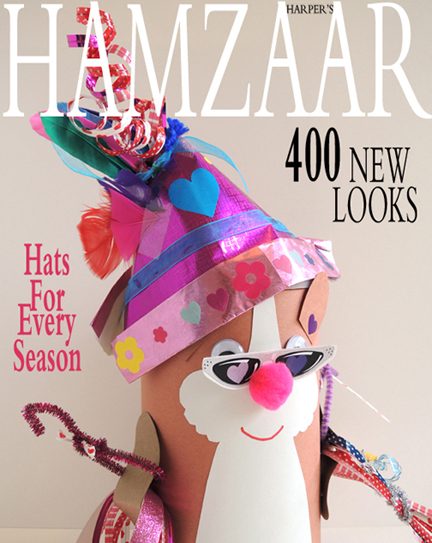 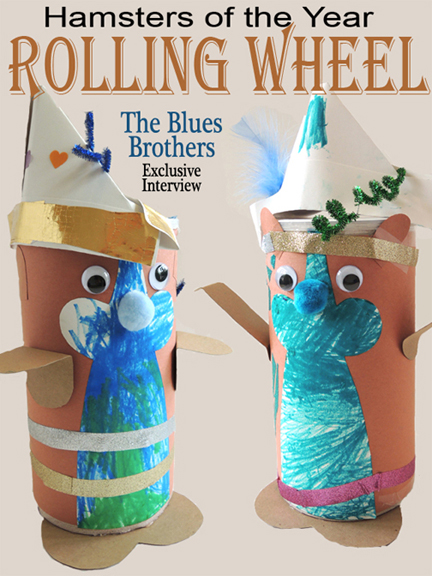 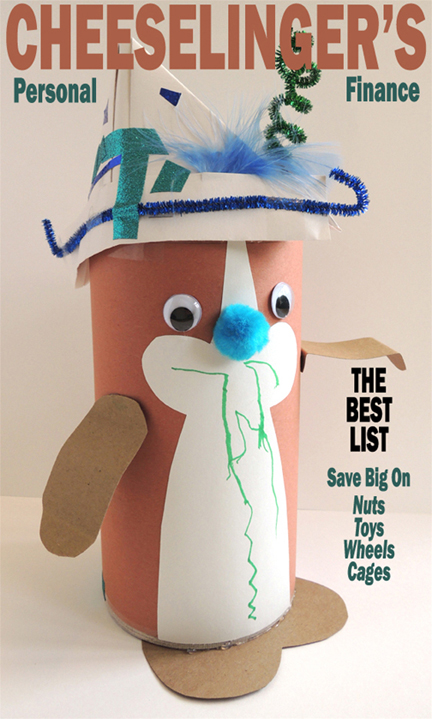 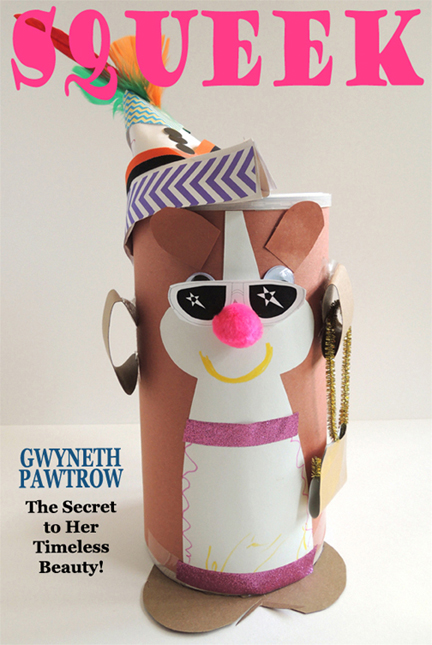