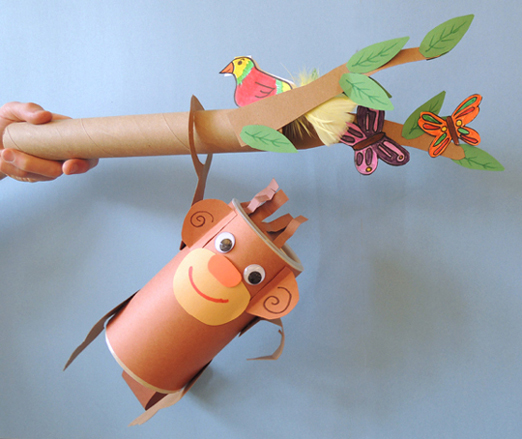 With a turn of the wrist, this gymnastic little money swings around (and around and around) his colorful rainforest branch! 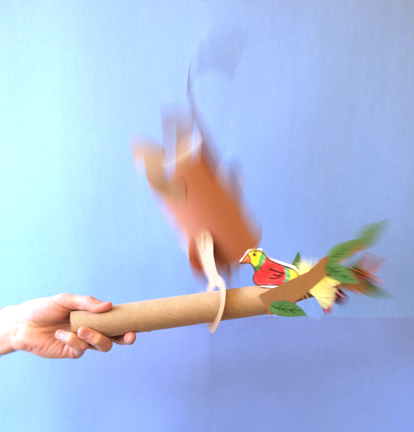 We read BIG Little Monkey, written by Carole Lexa Schaefer and illustrated by Pierre Pratt (Candlewick, 2008). A little monkey wakes up one morning, ready to play, and finds that his family still wants to sleep. He decides he’s ready to be a Big Little Monkey and leave the tree to find some new friends to play with. He encounters a sloth, a parrot, and finally…Sly Boa. The game “curl my tail around in tricky ways” doesn’t sound too good to Big Little Monkey, so he quickly scoots back to his family, happy to be their Little Monkey once again. 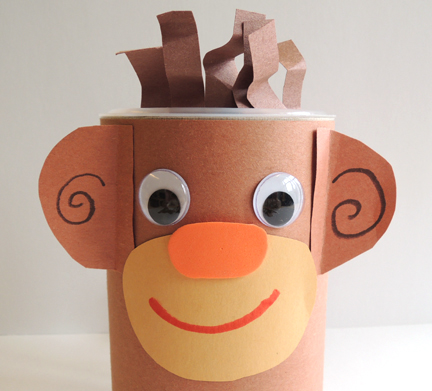 You’ll notice that the ears very close to the eyes and mouth. This is so the ears don’t hamper the movement of the monkey’s swinging arm.

The face is done, now for the body! Curl one end of the brown construction paper tail around a marker, then tape or hot glue it to the back of the oatmeal container. Cut the arms and legs out of the template and tape (or hot glue) the two legs and the short arm to the container. I curled the short arm up in the classic monkey “hand in the armpit pose.” 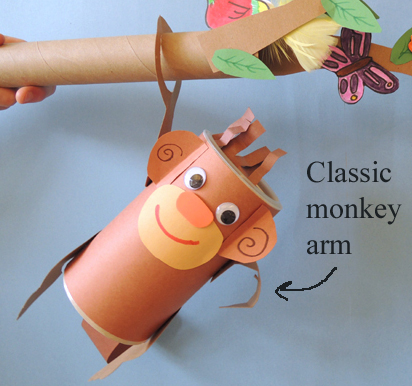 Finally, the monkey’s swinging arm. Cut a tagboard arm from the template, then place the paper towel tube on the round part of the swinging arm. Use the pencil to trace the diameter of the tube onto the template. Then cut the circle out. 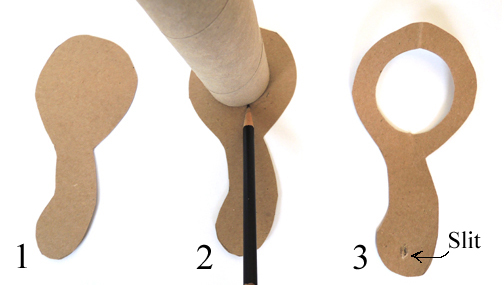 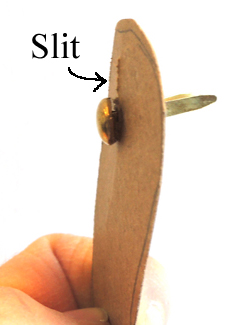 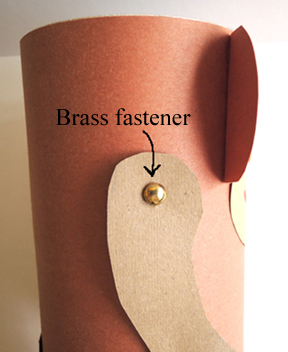 Reach inside the container to unfold the prongs, then replace the oatmeal container lid.

The monkey is done, now for the rainforest swinging branch! Cut two tagboard branches (mine were about 8.5″ long): 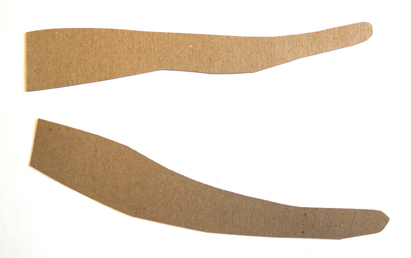 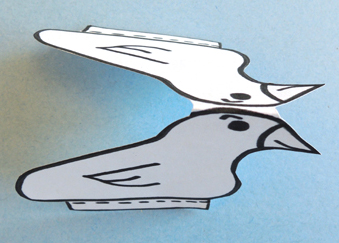 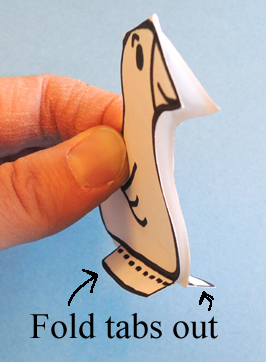 Use tape to attach 2 small feathers to the bird template as a tail. However, when you finally tape or hot glue your bird’s tabs to the branch, make sure the bird is at the very end and the tail faces away from the monkey’s swinging area. 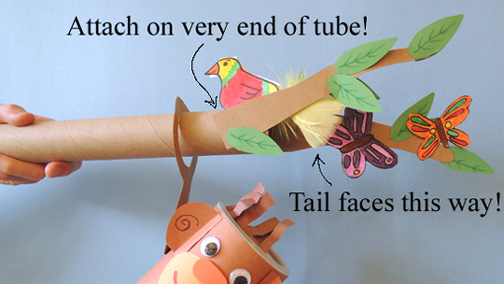 Again, attach the branches and bird on the very end of the tube! Otherwise, those items will be smacked repeatedly (or completely taken out) by the swinging monkey. We had a few tangled monkeys and squashed birds at story time, and had to do some quick repairs. 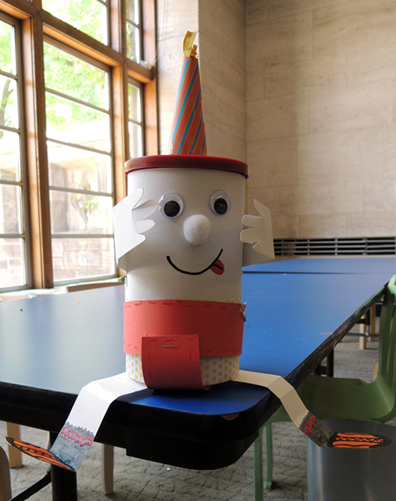 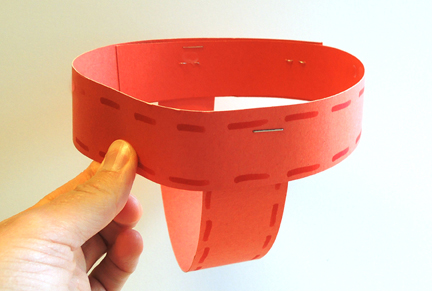 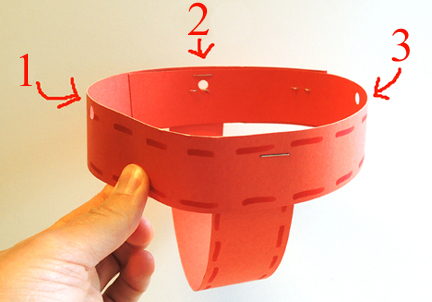 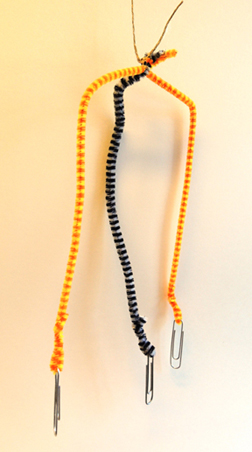 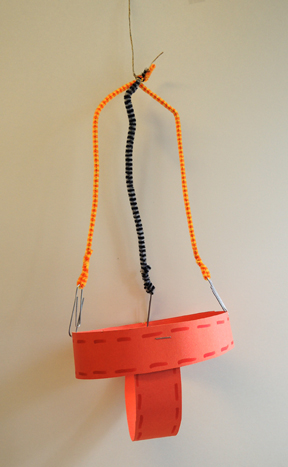 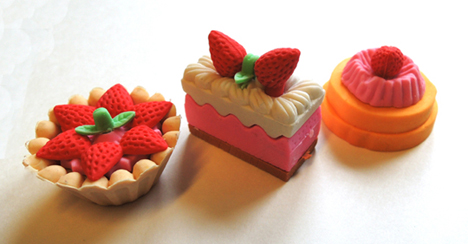 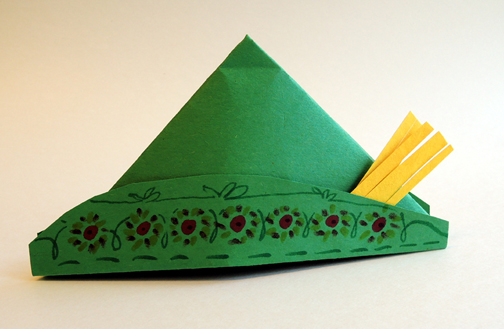