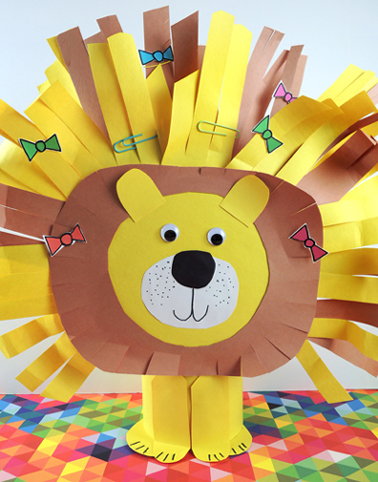 Is your mane getting a little wild and unruly? It might be time to tame those locks with a firm hand and LOTS of hair bows!

We read Little Red and the Very Hungry Lion by Alex Smith (Scholastic Press, 2015). Little Red is going to be eaten by a lion. At least that’s what the lion THINKS is going to happen! But Little Red has other ideas and this sassy and resourceful girl gives him quite a schooling. A delightful play on Little Red Riding Hood, this book was a super fun read-aloud…especially the last page!

In the book, the lion gets an amazing, but ultimately unwanted, makeover. It’s hilarious and we wanted to capture that in our story time project. So we designed an oatmeal container lion with a fabulous mane for cutting and styling! 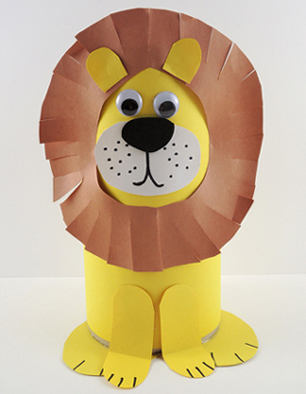 The lion is an oatmeal container decorated with construction paper and (optional) wiggle eyes. The original instructions can be found in our Lion-Hearted Hero post. However! You’ll need to do one significant modification to the lion’s face…a cardboard circle foundation to hold all those mane extensions:

Glue a circle of yellow construction paper to a 7.5″ diameter corrugated cardboard circle (we used a cake circle). Attach the brown mane circle, and add the lion’s eyes, ears, nose, and muzzle. Next, tape a bunch of yellow and brown construction paper fringes to the back of the cardboard circle. Finish by hot gluing the entire thing to the oatmeal container body. We recommend reinforcing that connection with tape as well.

Color and cut the hair bows, comb, and blow dryer from the template, then stand your lion in front of a mirror and start cutting and styling! We also offered paper clip barrettes and extra mane fringes to take home for future haircuts. 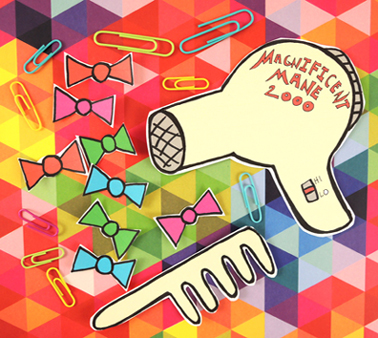 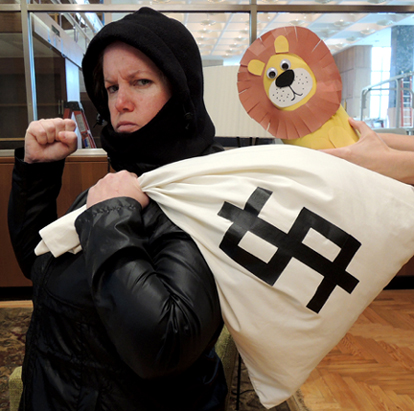 When a sneaky burglar strikes, it’s up to you and your lion companion to save the day! We made these simple oatmeal container lions, and then caught a story time crook.

We read How to Hide a Lion by Helen Stephens (Henry Holt, 2012). When a lion strolls into town to purchase a hat, the townspeople are less then pleased. Fortunately, a little girl named Iris isn’t afraid of the lion, and correctly recognizes him as a well-mannered friend. Hiding the lion, however, is a little difficult. And mom is VERY upset to discover him in the house. Hiding in town once more, the lion discovers and thwarts a robbery in progress. This act wins over everyone…except Iris, who already knew how fantastic her lion friend is! 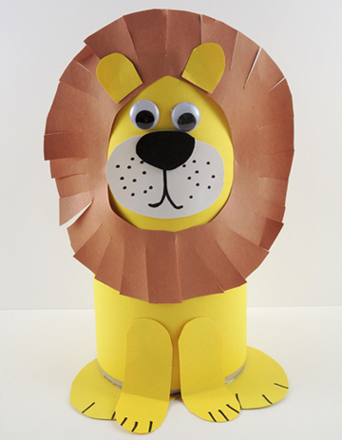 We used construction paper and a large oatmeal container to create your lion. It’s easiest to use hot glue to attach the bottom legs, mane, tail, and eyes to the container. Tape and/or glue works for everything else! You can use black construction paper for the nose, or a bit of self-adhesive foam like we did. Draw the eyes with markers, or use wiggle eyes.

I set my phone to sound an alarm close to when the kids were finishing their lions. Then I announced that the library had just sent out an alert – a burglar was on the premises! The kids and their lions headed out to the library’s lobby, where Miss Melinda was hiding, dressed in black pants, jacket, and ski mask. She also had a big pillow case with a “$” on it. As Miss Melinda made a break for it across the lobby, the kids gave chase… 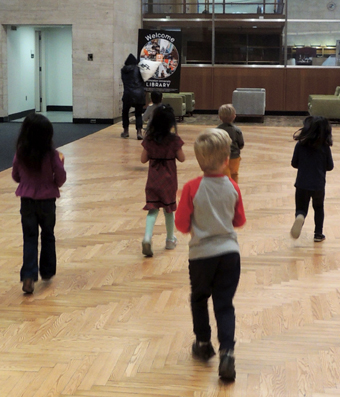 Eventually, she was cornered and tagged repeatedly by oatmeal container lions. Which, admittedly, was a first for her! 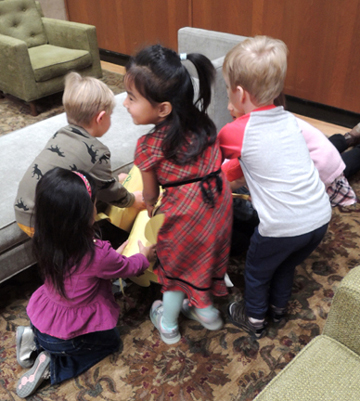 After the triumphant capture of the burglar, the kids returned to the program area to make hats for their lions (which is the reward he asks for in the book). These were cone party hats, cut down to 5″. The kids decorated them with stickers and a duck quill. Very snazzy. 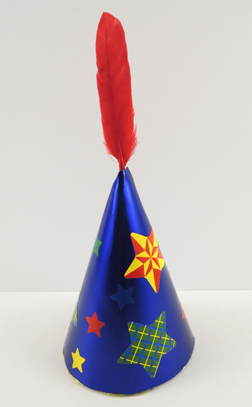