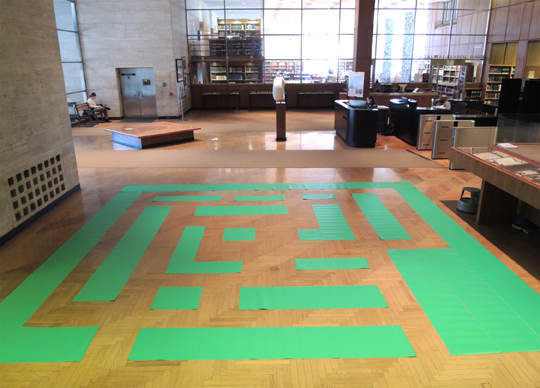 Today, we offer an exclusive first look at something big on our horizon. This month, my library is hosting a major math event. It’s called A Day at Digitopolis (named, of course, after the famed city in The Phantom Tollbooth). Today, you’re going to get a sneak peek at one of the activities – a giant 16′ x 16′ floor maze. But this is no ordinary maze! You have to get from start to finish without taking a single right-hand turn. Want to build one of your own? Read on!

I first encountered this puzzle at the Manhattan Museum of Math (home of the famous square-wheeled trike!). Their version, however, is a no left-hand turn maze that’s digitally projected on a big section of their exhibit floor. A floor projection wasn’t an option for us, nor was a vinyl mat, nor cardboard. The answer? $30 worth of green contact paper and a maze design by Robert Abott. 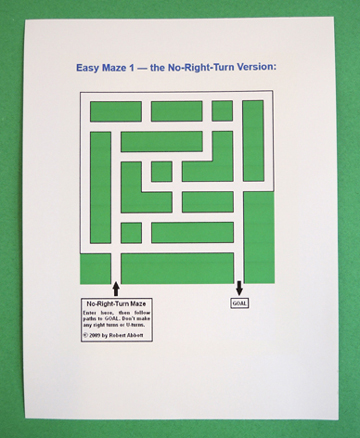 I did have to make a couple tweaks to Robert’s original maze. In his version, there are a couple of sections where the path goes right to the edge of the maze (specifically, on the left, right, and top sides). I added a border of green boxes to keep the pathway entirely enclosed. 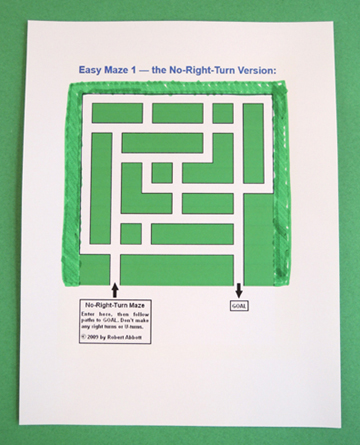 Once I finalized the maze design and decided that it was going to be 16′ x 16′, I had to calculate how much contact paper we needed. The rolls I found on Amazon were a standard width of 18″, so I just had to determine the length. I work best with models, so I crafted a little maze, in which 1″ = 1 foot. 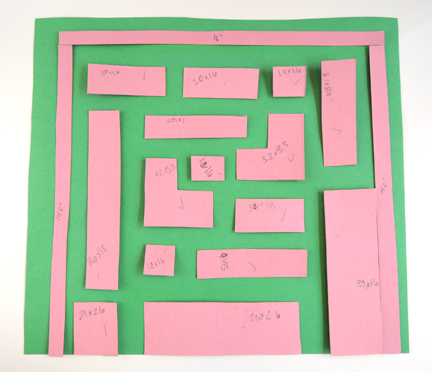 Once I added up the lengths of all the pink pieces, I had a rough estimate of how much contact paper we would need (112.25′). I ordered two, 75′ rolls, which left plenty of extra paper for mistakes. The task of actually building the maze fell on Marissa and Casandra Monroe. Casandra is a Princeton University student and super math whiz! 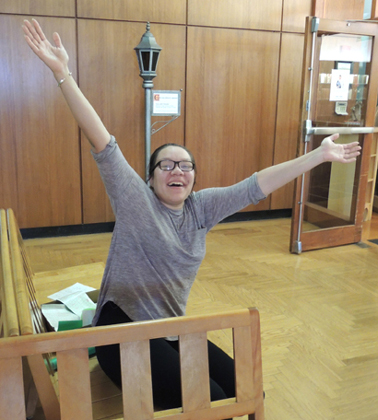 Casandra sketched the maze on graph paper, in which 1 square = 1 square foot. Then she drew a 16 x 16 square and sketched the various pieces inside it. To make the calculations nice and simple, she made path through the maze 1′ wide. 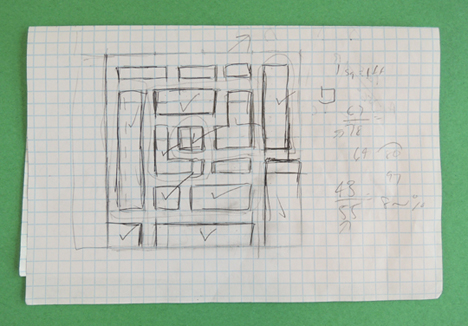 Then, Marissa and Casandra headed to the library’s cavernous main lobby and started building. They laid down the outer walls of the maze first: 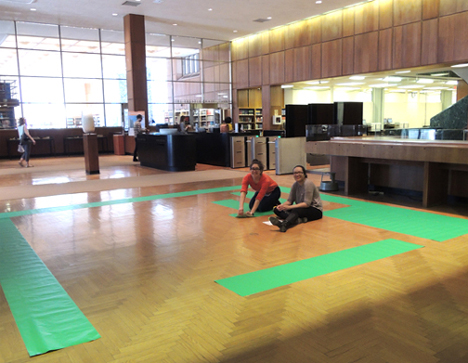 And then cut and placed the internal pieces of the maze. 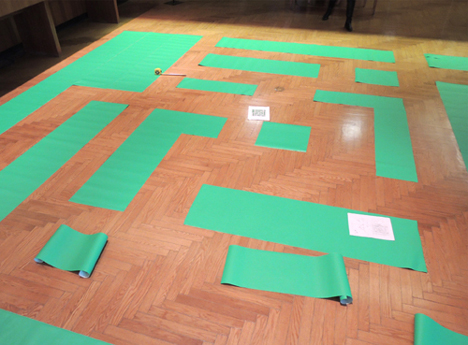 While they were filling in the pieces, they used a measuring tape to keep the path as close to 1′ as possible (even though there were some areas where the path was wider). 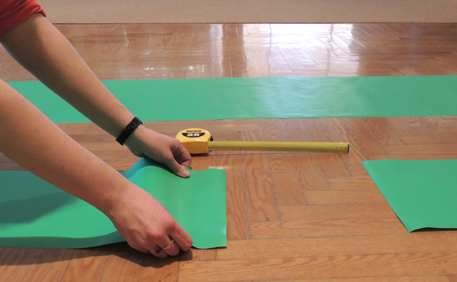 Marissa and Casandra kept the backing on the contact paper. But to keep the pieces from curling up, they used masking tape loops to temporarily adhere it to the floor. 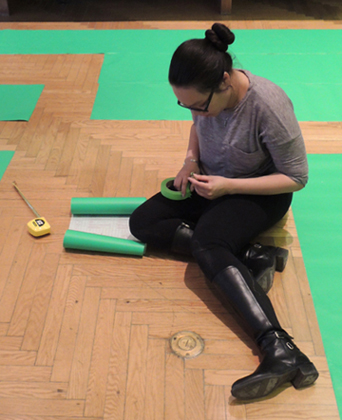 They also used permanent marker to label the backs of all the pieces and match them to a diagram of the maze. 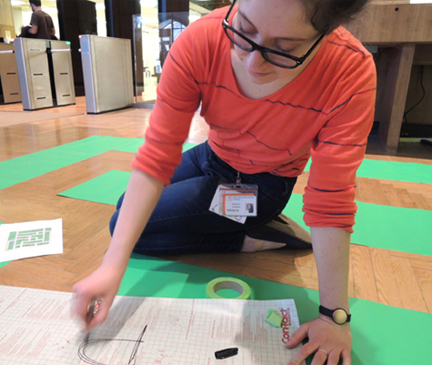 The morning of the event, we’ll be able to glance at the diagram, check the backs of the pieces, and peel and stick the maze quickly (we’ll have a measuring tape on hand to remeasure the pathways too). 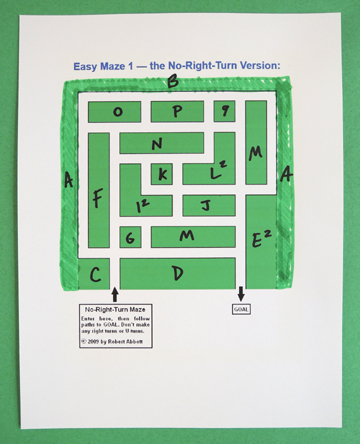 All in all, the maze took about 3 hours to put together. Cue “Eye of the Tiger!” 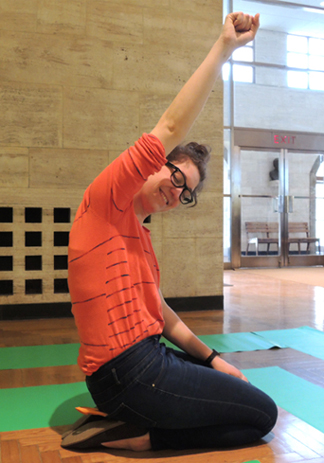 Three important things: 1) Don’t forget to mark the start and finish of your maze (we’re using extra pieces of contact paper with “start” and “finish” written on them in permanent marker); 2) At the event, make sure to have the solution posted somewhere nearby (or available as a handheld map); and 3) Test the maze!

Ian, our faithful maze tester, went through the maze and soon discovered that one of the green blocks was, if fact, making a necessary turn impossible. So Marissa and Casandra adjusted it, and sent Ian through again. No problems after that! 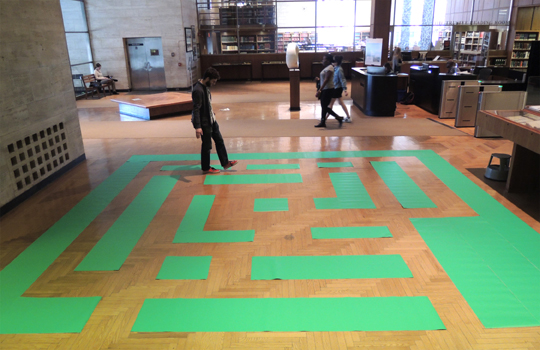 The real test, of course, will be at the event. There might be some last minute tweaks or unforeseen problems when crowds of kids are introduced into the equation. This isn’t the first time I’ve used contact paper to make large-scale event activities. Check out our most popular toddler activity ever, right here.