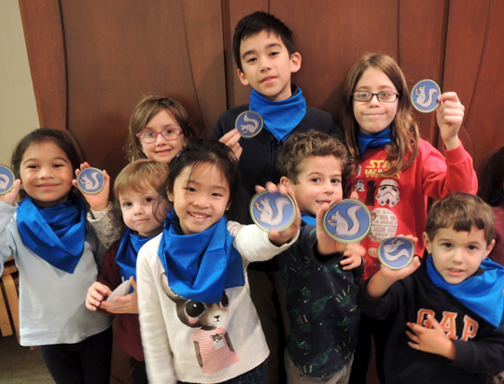 Bust out your compass and conjure up some snaplights! The Blue Ranger Patrol is prepared for all eventualities…including the supernatural ones. Those handsome Squirrel badges and neckerchiefs were earned at To Be Continued, our chapter book story time for 6-8 year-olds.

We read Arlo Finch in the Valley of Fire by John August (Roaring Brook Press, 2018). After moving from place to place, Arlo Finch, his big sister Jaycee, and their mom have landed in Pine Mountain, Colorado. Pine Mountain is remote, the cabin is creepy, and Arlo’s Uncle Wade is even creepier. Also, something is wrong with the surrounding woods, beginning with the ghost dog that prowls the property. Arlo joins the Rangers, which is not unlike Boy/Girl Scouts until you factor in the seemingly supernatural abilities of his fellow patrol members. As time passes, Arlo and his friends learn not only the secrets of the Long Woods – they also learn its many dangers.

Arlo and his fellow Rangers have some memorable camp outs, so we decided to replicate that by setting up a tent (which you might recognize from this story time) in our gallery… 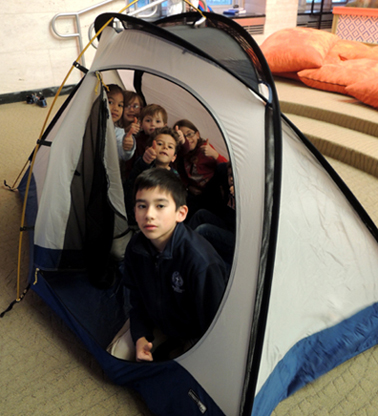 After “night fell” (i.e. I turned off all the overhead lights), individual campers journeyed to our gallery tree for a survival quiz. I queried them about 3 scenarios involving creatures from the book. You definitely have to read the books to know the answers (which are in bold below):

1) You’re camping with your patrol and see some dancing lights in the woods. Do you: a) Follow them; b) Take a photo; c) Tell your patrol leader you see something unusual?

2) A nightmare had just emerged from the woods in front of you! Do you: a) Run – they aren’t very fast; b) Throw salt at it; c) Conjure a snaplight.

3) A hag is chasing you through the Long Woods! Do you: a) Throw salt at her; b) Climb a tree; c) Throw Faerie beetles at her.

After correctly answering the quiz, campers were asked to demonstrate a “snaplight,” which is a short-lasting light Rangers can produce by snapping their fingers in the Long Woods. In our case, the snaplights were glow sticks, which do produce a very satisfying snap! before beginning to glow. 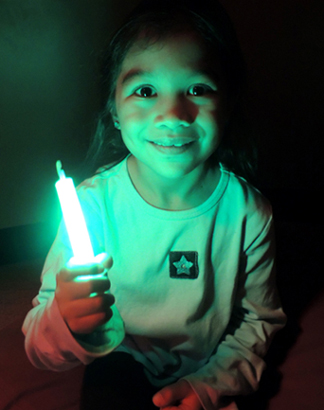 The final activity was making a water compass using a sewing needle, a button magnet, and a bowl of water. I demonstrated how to do it, and then gave each kid a little kit to try at home (here are the instructions if you’re interested). 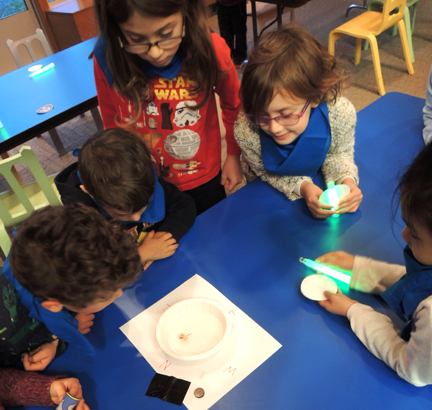 In the book, Rangers earn patches for each level of accomplishment, and Squirrel is the first level. So, after completing the creature quiz, snaplight trial, and learning about compasses, campers were awarded a blue neckerchief (purchased for $2 each in the t-shirt decorating section of Michaels Craft store) and a a Squirrel patch (you can print your own set here): 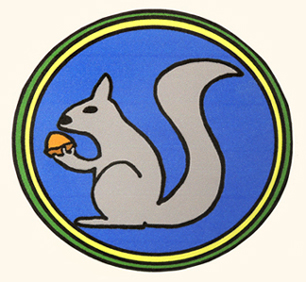 Arlo Finch in the Valley of Fire was massively popular with the kids in our program – it’s scary, suspenseful, and also very funny. I was delighted to learn that the sequel, Arlo Finch in the Lake of the Moon will be released February 2019. YES!