Announcing the winners of our annual 350 for 50 writing contest!  This year, young writers were challenged to compose a short, 350-word story that included the sentence, “The numbers changed quickly.” Winners from our four age categories enjoyed a $50 shopping spree on Amazon. Congratulations to all! 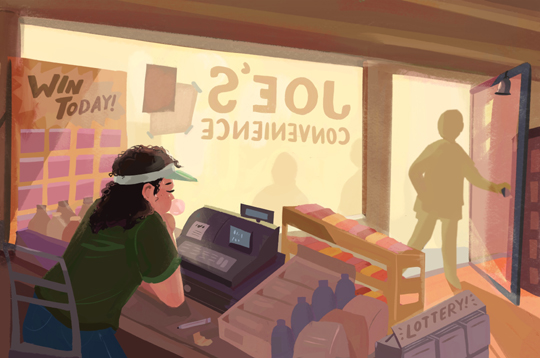 Amy chewed her bubblegum slowly. It was a hot South Carolina day and her visor stuck to her forehead. Her summer job at Joe’s Convenience Store was excruciatingly boring. The few times the door chimed the costumer who had opened it only wanted a soda or a lottery ticket.

Suddenly, Amy was pulled out of her dreamy state. The door chimed and a tall man walked through it. “Hello.” Said the Man. “May I purchase a lottery ticket?” He asked. “Sure.” Said Amy, further sedated with the dullness of the purchase . She scanned the ticket. “$2.99”. He handed her the money. The man walked out of the store; the door flapping closed behind him.

A few moments later the door chimed again. Then again. Soon the store was full of people, all wanting lottery tickets. Amy scanned and scanned. She looked at the screen of the cash register. The numbers changed quickly. A wide grin spread across her face. At this rate the amount she was going to be paid at the end of the week was enough to keep her out of work for the whole summer. She had really won the lottery.

KID IN A CANDY LAND
by Maddie Morris, age 11, Mississippi 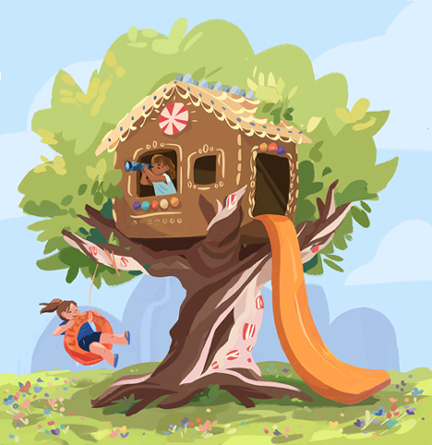 Would you like to spend your summer vacation in a land comprised of candy? Where I come from, as soon as vacation starts, everything turns into sweets! Sugar flowers bloom, boulders become rock candy, and chocolate waterfalls flow. It’s a kid’s whimsical dream! I looked down hastily at my watch; time seemed to drag as the minutes counted down until summer. When the school bell finally rang, I practically flew like a bird down the front steps. This year, I want to do something extraordinary with my best friend, Maria.

I biked over to her house as quickly as I could manage. We had been pondering what adventure we should have this summer. I had an idea so earth shattering that I had to tell her immediately: we should build our own gingerbread treehouse. Maria and I decided on what additions we would make, and then we got right to work. What took the longest was baking the gingerbread. It took us a while to find an oven that big! Once that was completed, we built a Life Saver tire swing and an Airhead slide. When we finally finished, we gazed through the isomalt spyglass that permitted us to look down on the sugarscape of sweets below.

This was the best summer of my life! We had so many adventures, and I really felt free. At the end of summer, Maria and I devoured our candy treehouse. It took us some time, but we invited our friends and families to come help us with this impossible task. On the morning of the first day of school, Maria and I met at the spot where our treehouse once was before we ravenously finished it off. As we counted down the minutes til the end of summer, we remembered the fun times that we had. My favorites were climbing a tree made of peppermint bark and jumping a candy-floss rope. Suddenly, I glanced down. The numbers changed quickly! Five… four… three… two… one… and summer was over. We can’t wait until next summer, minus the stomachache.

REMEMBER THE PAST
by Rafael Ramos, age 14, New Jersey 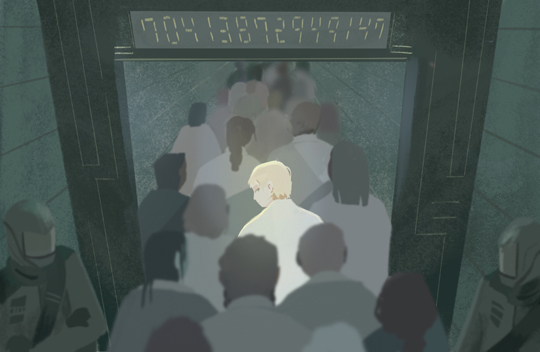 Sitting at my desk, I typed vigorously. This ‘job’ I had was the worst, but I had to do it. I needed to. Typing a bunch of old stories on a computer was unsurprisingly boring when doing it for hours straight. News outlets stated that the world’s remaining governments ‘hired’ a ton of unemployed people because the rising sea levels stole homes, including mine, but in reality, it was enslavement. The previous generations neglected to look for solutions to their own problems and we paid the price. I’m not saying this generation of people is any better because my ‘employer’ decided we should leave for space. This is why I was typing.

From movie scripts to baking recipes, thousands of people with my job were creating an archive that would serve two purposes – they told us. One archive to send to the stars and another left on Earth for the unfortunate who are left behind. Oh yeah, only the elite would leave the place. World leaders, influential corporations, and some celebrities got to say “sayonara.” The rest of us were left here to suffer mother nature’s retribution. Talk about fairness.

Buzz. Buzz. Buzz. My sector’s lunch break started. My coworkers and I in our white jumpsuits all stood up almost simultaneously and headed to the cafeteria. We walked down a wide hallway with a counter above. It tracked every person who passed through it so we were accounted for like products, going up one per person. The numbers changed quickly. Armed guards and cameras watched our movements so nobody ever picked a fight. I sat isolated from others, the way I liked it, and ate. After lunch was over and I had to head back to my sector, I felt a hand on my shoulder while getting up. Before I could turn to see, a voice said, “I remember who you were in the past. I got a plan to leave this prison and I’ll need you.” I then whipped around only to see another white jumpsuit disappear into the crowd.

WHAT HAD ONCE BEEN PERFECT
by Karen Yang, age 16, New Jersey 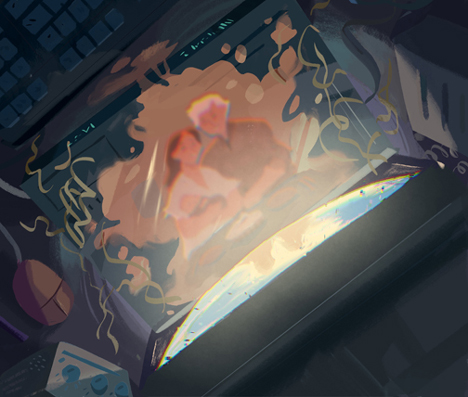 What did you expect? It was never going to be perfect. You took a look at the machine and sighed. You had spent eons coding, working on this hunk of slow-moving computer, tweaking the controls until you could indicate a year and the computer would broadcast a memory about your family, your friends. Likewise, thanks to your efforts, the computer should’ve been able to show the lives of the people you had left behind.

But now, it was all for nothing. The machine would need years to recover from the pile of scorching red nuclear ramen noodles you had accidentally spilled. Though it was useless, you had wiped the oily noodles away, revealing a red film of fat where the computer glowed with the present year, 2081.

You started groaning but stopped when the computer began buzzing again, awakening from its hours long hibernation.The numbers changed quickly. 1994, 2004, 1990. Memories flashed on the screen; dances at Long Beach Island, Mom and Dad cutting a slice of peach pie as a baby (you!) watched on. You glowed as the computer continued to hum. Perhaps, in a miracle of all miracles, it had worked! You inched closer to the screen, eager to remember Maisy’s squishy pug face, to taste the texture of pistachio ice cream, to hear the song your friends sang in the underground library, to honor what was now gone.

You grimaced at the next number: 2021. The year you had left this all behind, this life that had once been perfect. The computer, as if understanding that your life had ended this year, decided to crash as well. It shut off, accompanied by your loud wail.