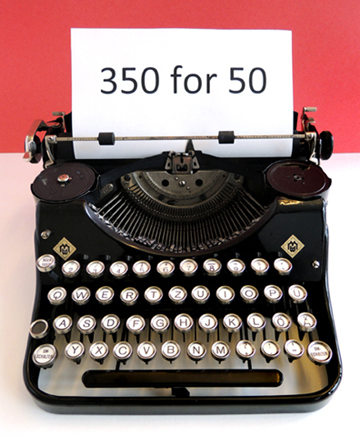 We are delighted to announce the winners of our annual 350 for 50 writing contest! This year, we challenged young writers from 3 different age categories to pen a 350-word story that included the sentence “It unfurled slowly, then settled.” The prize? Publication, of course, and a $50 shopping spree at Labyrinth Books, Princeton’s local bookstore! Warmest congratulations to this year’s winners. 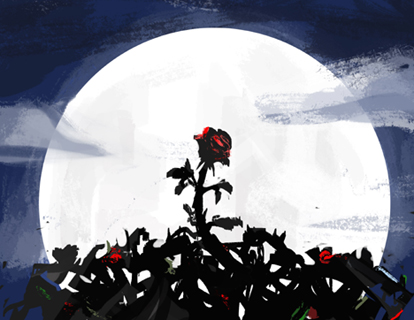 The old man peered at his clock. It read 11:54 PM. The wind howled through a small crack in the window. He saw a swarm of bats glide across the bright full moon. A loud groan escaped his mouth. Oh the pain he had! His back was badly injured after the horrible fall he took yesterday in the garden.

This old man had such extensive pain, he pushed himself up with his thin, aching bones while reaching for his cane to take an extra dose of medicine. Finally out of bed, he waddled to the living room.

Suddenly, he heard a strange noise. No, it wasn’t the wind. It was, it was… he didn’t exactly know what it was. With mysterious thoughts in his mind, the man continued on his journey to take an extra pill. As he reached for the window pane to gain some desperately needed balance, he caught sight of his newly planted rose bush.

What only 24 hours ago was a lifeless, dormant collection of clenched buds appeared to be awakening. Or was it? Suddenly from the middle of the bush a single red rose began to rise. One inch. Two inches. Then three and four. Before long it was a full foot above the rest. Then it just stopped. It unfurled slowly, then settled.

The old man was so astounded he forgot all about his aches and pains. He dropped his cane as he scurried back to his bedroom. Quickly shutting the door behind him he jumped back into his bed. He didn’t sleep a wink that night. He just laid there counting the minutes ‘til daylight. 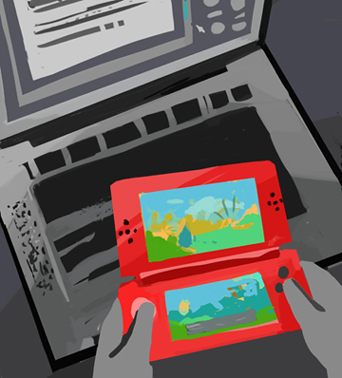 “Stop playing video games. You’re going to go blind!” shouts Mom. “Do something productive. You have to enter the Picture Book Press 350 for 50 contest this year. It has to include the sentence, ‘it unfurled slowly, then settled’.”

“NOOOOOOO!” I shout.How am I supposed to think of something for that sentence and make it interesting? After a week I haven’t thought of anything. Maybe Mom forgot about it. Now it is spring break and I’m playing Pokémon on my 3DS.

“You can’t spend your spring break playing video games. Your thumbs will fall off.”
I pace around worried that I can’t think of anything. But being the forgetful person that I am, I start to play Pokémon again. I catch a Shuckle, a Noibat, a Skrelp, and a Metagross.

“You have to practice your piano and then write your story.”

This is horrid! Now, not only do I have to write but also I have to practice piano. I sulk to the piano and flail around on the keyboard.

Slinking over to the desk, I flop on the chair and lay down my head. Suddenly, an idea hits me. Why haven’t I thought of this before? I smile and type furiously. My story is about me trying to figure out what to write about. I’m typing so fast, my laptop might burst into flame.

Soon, I am bored.

I wander off and pace around for a while, and then I am drawn to my 3DS like a moth to a flame. I crushed the Elite Four with my Xerneas. I am declared the league champion. This is psychedelic!

Oops, Mom is walking past. I’m supposed to be writing. I hurry back to my laptop.
I finally reach the present in my story and I have run out of material. Maybe I should check the rules. It says “Stories must be no longer than 350 words.” Man! 350 words! That’s a lot for me. How many words do I have left? I check the word count. 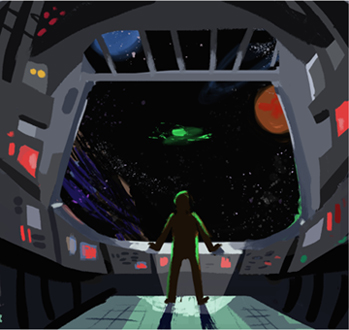 Space. In the old days, everyone thought that there were lots of galaxies, full of wonder and hope. But being the patrol in the small quadrant of Aster-Delta 6, I found that looking at a galaxy for hours on end really doesn’t fill you with excitement. Or anything close to that. Instead, you begin to question your existence and the existence of others.

On my small, four-roomed ship (plus cockpit) called “Determination,” the most fun activity was releasing the air lock. Or playing Merio – a virtual-reality game. But seriously, after awhile, beating Browser again and again gets boring quickly. This is a lonely job.

One day, in the middle of one of my “questioning life and existence” sessions, my monitor
showed me that there was an incoming ship. The ship was small and Class 5, which was good because only Class 3 and up were allowed to dock here. My ship is a class 5.5c. I messaged him and said “What is your business in this zone?” The response I got sent chills down my spine: “CORRUPTED.”

This never happens. This would take an insane amount of damage/hacking to get this message typed. To put this in perspective, you would need a whole country of hackers on that ship to create half of the letter “c.” This message had only been managed once by a crew of 2 trillion and a space ship made from three small planets. The craft I was looking at couldn’t fit two people.

I stumbled and slapped myself to see if this was some cruel nightmare. It was not. I
messaged again: “WHAT?!” The response came from the snake like blaster hose at the top of the ship. It unfurled slowly then settled. Another message: “ CORRUPTED.”

I started shaking. I tried to contact Aster-6 headquarters. The message I got back terrified me to the bone: “CORRUPTED.” For the first time, I was truly alone. The blaster on the ship was charging up.

There was a blinding light and then sudden and utter darkness.