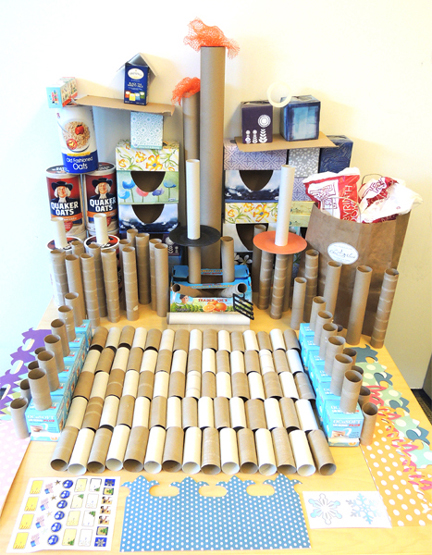 Q: I want to do one of your projects, but where am I going to get 30 oatmeal containers for my classroom?

Don’t start eating a mountain of oatmeal just yet!

Here at Princeton University, I have a recycling program that involves the entire library system. I send out periodic calls for recyclables (oatmeal containers, tissue boxes, paper towel tubes, tea tins, etc.) and people regularly bring these items from home and drop them off at our office. The lovely pile of goodies you see displayed above is about six week’s worth of supplies, all donated by Princeton University Library staff.

People drop off useful odds and ends as well, like old jewelry, wrapping paper remnants, plastic lids, stickers, and ribbon. Sometimes, I’ll request something specific, such as coins from foreign countries to serve as “pirate treasure,” or old neckties to transform into stuffed snakes.

People also know to contact me if they have office items they’re recycling or throwing away. I used two big boxes to create a spooky tree adventure for this post. An extra large box became a fabulous Humpty Dumpty climbing wall for this project. I used discarded white archive boxes for this miraculous mechanism project, this fast food stand, and this haunted dollhouse (and I still have some left over!). Have an overflow of legal size manilla folders? Try this camping backpack!

Another giant box became Crackenhopper Field for some creepy carrots. An avalanche of leftover brown packing paper was used for this tree project. An influx of bubble wrap was used to secure giant feet at this dance party. A friend who works at a pharmacy sends me a steady stream of tagboard he salvages from box packaging. And if you’re wondering what to do with those leftover 8oz water bottles, try this simple ship in the bottle project.

Yes, I get pretty giddy about recyclables. Not only do these materials get a fantastic second life, they allow me to splurge on other art supplies (like this, this, this and this). I even reuse the paper and plastic bags the recyclables arrive in – kids use the bags to carry their projects home.

You can do something like this too. Send word to colleagues and friends at your library, school, workplace, or neighborhood and see what you can find. There’s also Freecycle, the national network for freely getting and giving all sorts of stuff. When I was a grad student at the University of Virginia (and a Public Programs Coordinator at a children’s museum at the same time), I used a UVa listserv to request recyclables for my programs. Perhaps your learning institution has something similar you can tap into?

There’s also going right to the source to find something. I’ve circled around camera shops to collect clear film canisters, snagged branches from grounds crews, grabbed rocks from roadsides, pawed through piles of discarded spice bottles to find juuust the right ones for a project. I spent weeks repeatedly going to Starbucks to claim empty gallon milk jugs to transform into an igloo (I’m afraid I don’t have a picture of my igloo, but I pinned one like it on my “Ideas & Inspirations” board on Pinterest).

Worst case, you could buy 30 oatmeal containers and consume 1,260 ounces of oatmeal. I’ve done that too. Oh yes.

Have a question of your own? E-mail me! danas@princeton.edu