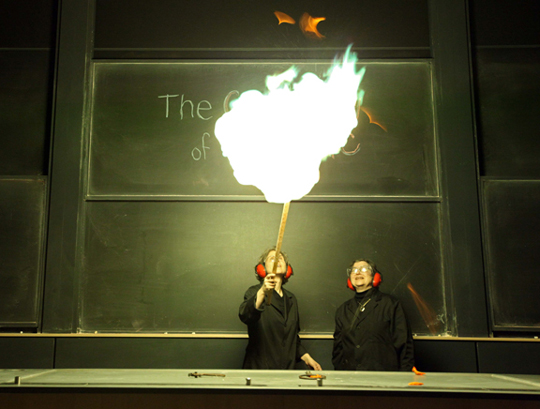 Move over Merlin, Gandalf, Harry, and Miss Price! It’s time for some science magic! That’s me having the time of my life igniting a hydrogen balloon soaked in aqueous barium chloride. Best. Time. Ever.

Last month, Cotsen collaborated with the Princeton Chemistry Outreach Program to create The Chemistry of Magic, a program that unveiled the science behind seemingly magical chemical reactions. The lecture and demonstrations were the brainchildren of Dr. Kathryn Wagner, who is standing to the right of the GIANT GREEN FIREBALL in the image above.

Some of my favorite demonstrations included “Elephant Toothpaste” (a hugely gloppy reaction created by mixing hydrogen peroxide, soap and potassium iodide solution), the “Ring of Fire” (igniting isopropyl rubbing alcohol within a water cooler bottle to produce a slow, licking blue flame), and the “Methane Mamba” (which basically involved holding a column of methane infused soap bubbles in our hand, placing a match in the middle, and enjoying a raging pillar of flames).

Could you host such a program? Sure! There were a couple of high school science teachers in attendance. You might have one near your institution or library who would be willing to work some science magic. You can also talk with your local science center, university, or college to see if they might be interested a collaboration.

But don’t, however, try this at home. We were in a large chemistry lecture hall with proper ventilation, safety equipment, and under Dr. Wagner’s watchful eye. Don’t try this at home folks! Really.

So the next time a character in a book summons a fireball (Incendio!), we hope that readers will pause and reflect on the real fireball they saw at this program, and consider the awesome science that made it possible.