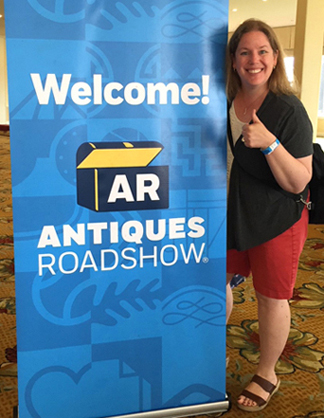 Get ready to have a serious case of the envies. Katie got to go on ANTIQUES ROADSHOW in San Diego last week. ANTIQUES ROADSHOW! So of COURSE I asked her to blog about it. Take it away, Mrs. Fifteen Minutes of Fame!

My grandfather was a collector. He collected books, magazines, newspapers, maps, ephemera, stamps, and posters, among other things. He also dabbled in selling some of the items he collected, but he was far more passionate about buying and collecting than he was with selling.

After my grandparents passed away, I inherited the book and stamp collection. I’ve been slowly working my way through boxes and shelves of materials, discovering many historical and interesting pieces that I had no idea my grandfather had purchased. To be honest, my dear grandfather himself likely forgot he had some of the things in his collection.

My younger brothers have also been given some family heirlooms, and we’ve often talked about how we should get the items professionally appraised. One of the places we jokingly said would be fun to take our items is the long-running PBS television series, ANTIQUES ROADSHOW. When ANTIQUES ROADSHOW released its schedule for the 2018 season, I sent one of my brothers a text and said “Hey, if I get tickets, want to come to the ROADSHOW with me?” And that’s how he and I ended up in San Diego over Memorial Day weekend with our carefully packed treasures in tow. 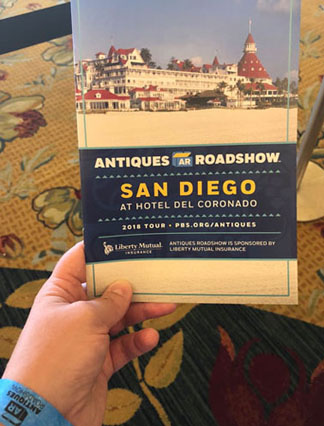 ANTIQUES ROADSHOW was held at the historic Hotel del Coronado, which is a gorgeous wooden Victorian beach resort built in 1888. 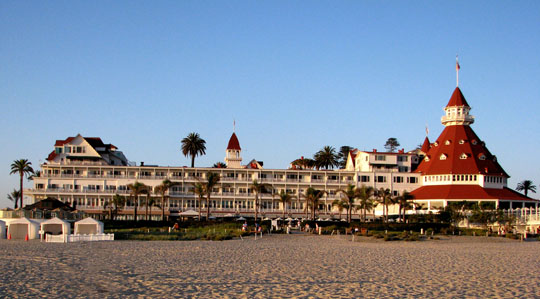 The ROADSHOW took over the entire hotel property, with appraisal tables inside the magnificent Crown Room and on the Windsor Lawn overlooking the Pacific Ocean. Film crews and producers were staged in the main appraisal areas, but roving crews were wandering the crowds and filming unique items throughout the day. Our first stop after having our tickets checked and receiving a ROADSHOW wristband was the Ballroom, where we waited to have our items reviewed by a general appraiser. 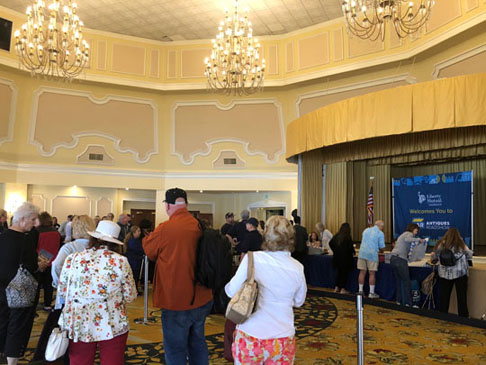 There we were given tickets to meet an appraiser in specific categories: Asian Art, Collectibles, Folk Art and Prints & Posters. The Collectibles table was outside on the Windsor Lawn, but the other tables we needed to visit were inside the Crown Room. 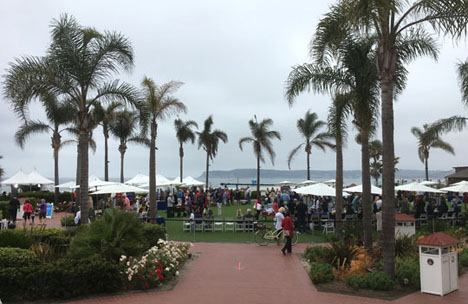 My brother and I (and occasionally my son) slowly made our way to the four category tables, met with the appraisers and had them look over our items. The appraisers gave us information about our antiques in general terms and provided us with both an auction and insurance estimate of value.

My day was absolutely made when I met Nicholas Lowry, one of the more recognizable ANTIQUES ROADSHOW appraisers, at the Prints & Posters table. 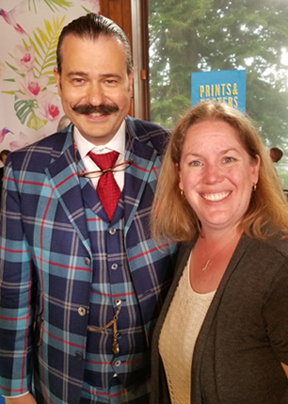 The story of the ROADSHOW was lines. One must be very patient and wear comfortable shoes when attending ANTIQUES ROADSHOW. We waited in a lot of lines. However, the long wait gives you the opportunity to meet and talk to others from across the country, each with fascinating stories about the items they brought to be appraised. One woman came well prepared to wait in the never-ending lines. 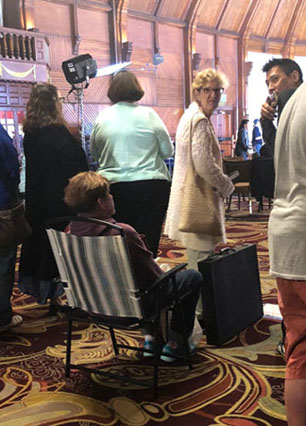 We were standing behind this woman when one of her items was chosen to be filmed by a roving film crew. 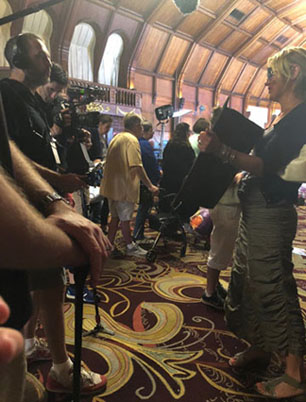 While waiting in lines inside the Crown Room, we saw four appraisals be filmed. We also paused to watch a gentleman have his mandolin appraised on camera in the Garden Patio. 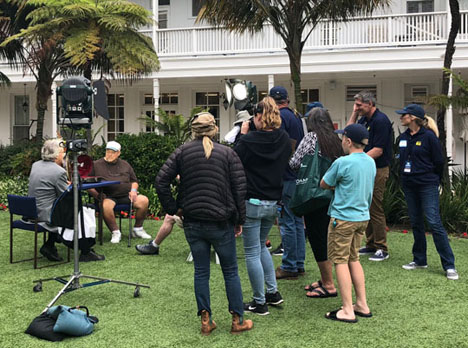 It was quite interesting to observe the production and get a behind-the-scenes look at what goes into filming ANTIQUES ROADSHOW. It’s a lot more complicated than it appears on television, with the antique owner and appraiser recording several explanation takes before the value estimate occurs. By doing it this way, the producers can capture the genuine look of surprise (or disappointment!) when the dollar amount is spoken.

I won’t reveal any secrets about the appraisals we watched live, but I will share that my brother and I were not selected to have our items filmed for an upcoming episode of ANTIQUES ROADSHOW. It is possible, however, to perhaps see us walking through the crowds or standing in one of the many lines! 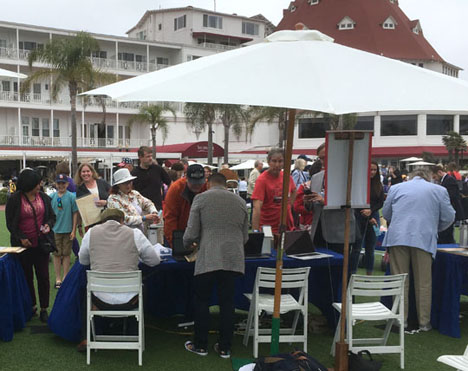 My son braved the cameras and filmed a short clip in the ROADSHOW “Feedback Booth,” which runs during the credits, so maybe he’ll appear a future show. 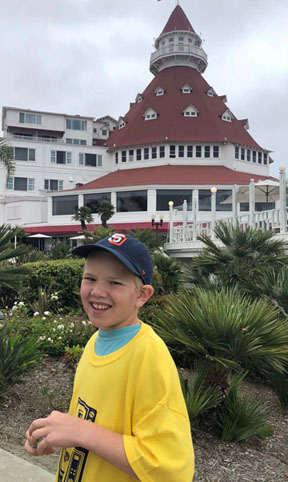 As soon as we wrapped up our final appraisal, we left with smiles on our faces and hungry stomachs that needed to be fed. We have to wait until January 2019 to watch our episode of ANTIQUES ROADSHOW air on PBS, but the event provided us with fantastic memories we will never forget.

For those of you who may be planning a future visit to San Diego and the Hotel del Coronado: definitely stop by the sweet shop for a treat. The gelato they serve is excellent.