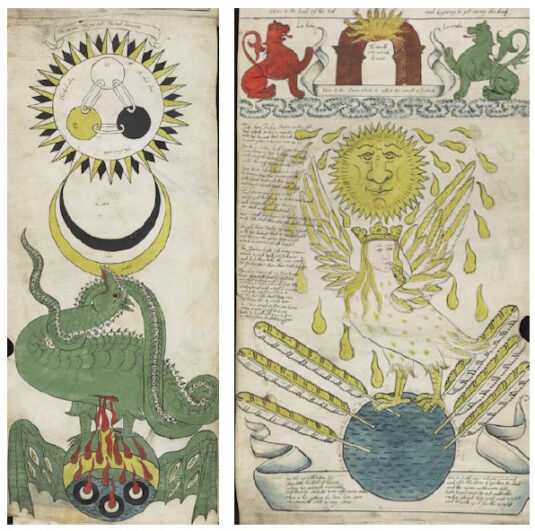 When is a toad not a toad? To answer that question, we’ll need to delve into the fascinating history of alchemy!

Mysterious, fantastical, and shrouded in secrecy, alchemy in medieval Europe was the study of change and transformation. Practiced (both illegally and openly) from at least the first century until well into the eighteenth, alchemy’s obscure imagery of flasks, feathers, dragons, and lions disguised it’s more practical side: dissolving, distilling, and coagulating substances, either for riches, or for healing. 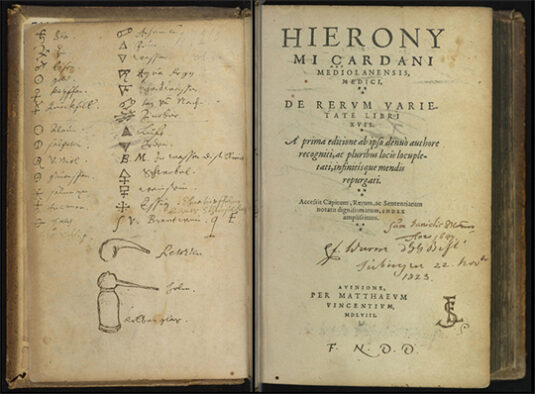 With some scrolls clocking in at over 22 feet in length, the lavishly illustrated Ripley Scrolls are named after English alchemist George Ripley (d. Ca. 1490), although Ripley may not have invented them himself. Through the centuries, the Ripley Scrolls and their depictions of alchemical processes have been interpreted, copied, annotated, and studied by famous scientists including John Dee and Issac Newton. 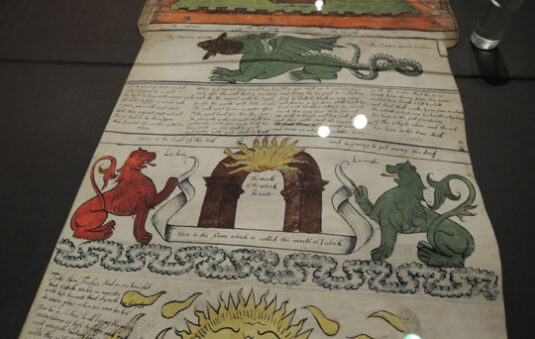 Interestingly, alchemists would sometimes use birds, animals, and unusual images to represent scientific processes. A toad, for example, represented “prime matter,” the substance the alchemist would start with at the very beginning of an experiment. 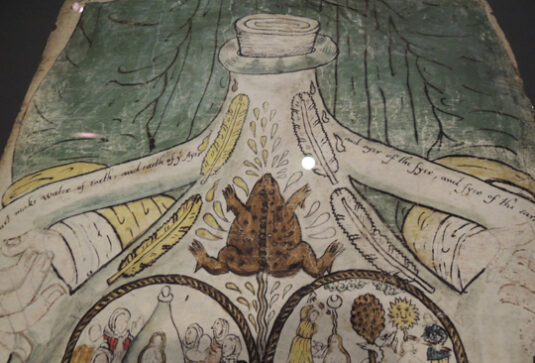 In some works, a serpent and an eagle represent two salts (sal ammoniac and saltpeter). Ravens, peacocks, and eagles represented color changes. You can see some of those illustrated in the book below. 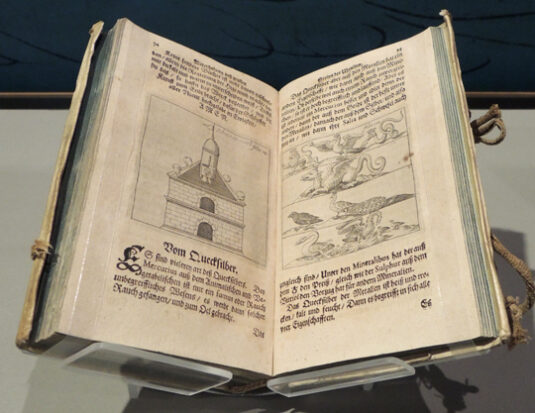 But probably the most exciting creatures gallivanting throughout the collections materials are …DRAGONS! The dragon pictured below very dramatically depicts the transformation of metallic substances into a life-giving elixir. Please note that the dragon is not, in fact, dying. It is happily giving forth healing. 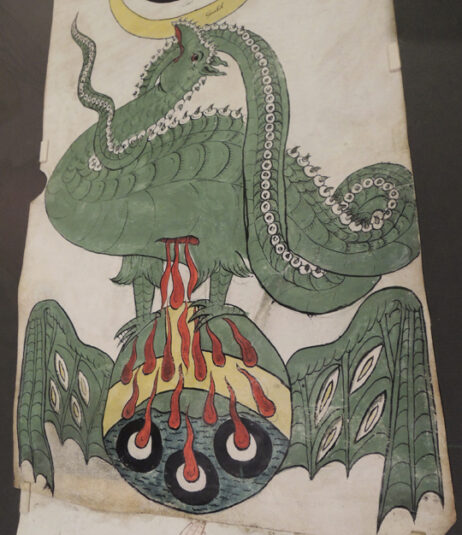 And now…how about an alchemy challenge of your very own?

We loved the concept of ingredients disguised as animals and secret recipes, so we put together a little alchemy experiment of our own. We’re calling it “Ye Olde Mysterious Rainbow Elixir of LYFE.” 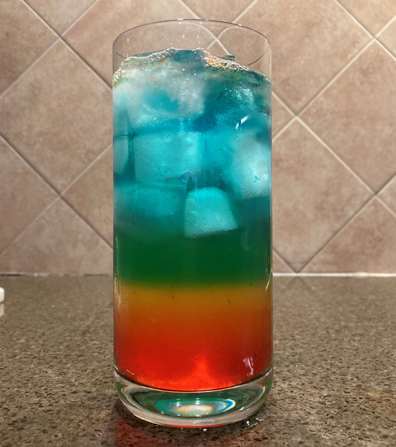 Here’s the Ye Older Elixir of LYFE recipe (including a legend to held you decode it)! The original recipe can be found here, on Andrea Hawksley’s blog.

You can stop reading here, or continue to see how the experiment went for us. Spoiler alert: we had a MAJOR fail the first time. But honestly, that’s in keeping with the history of alchemy!

Recently, I visited Princeton University’s exhibit on alchemy and learned all about how alchemists each had their own way of documenting and encoding their processes. Whenever I saw this challenging recipe for rainbow lemonade, I knew I just had to test my alchemical skills. We gathered the supplies, headed over to the staff kitchen, and set out to make our very own alchemical lemonade!

When we started, we knew we had to be careful because we only had two lemons and one cup of sugar. Just like the alchemists who were working with rare, expensive, precious metals, our supplies were limited and valuable.

Our first challenge was how to dye each of the five layers to get a rainbow. We had a box of food coloring, but there was only red, yellow, green, and blue – no orange! We experimented with different amounts of red and yellow food coloring until we found just the right amount: one drop of red per every three drops of yellow. 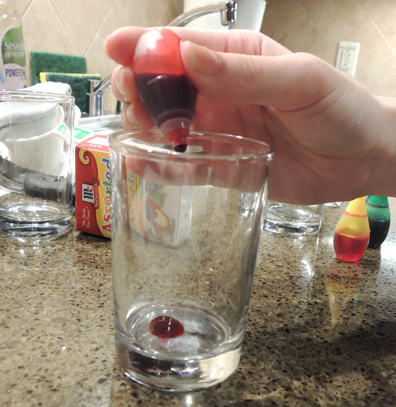 Our next step was getting the lemon juice. Before cutting and juicing the lemons, we applied gentle pressure to the fruit and rolled it back and forth on the counter. This allowed us to get the most juice possible out of our precious lemons. 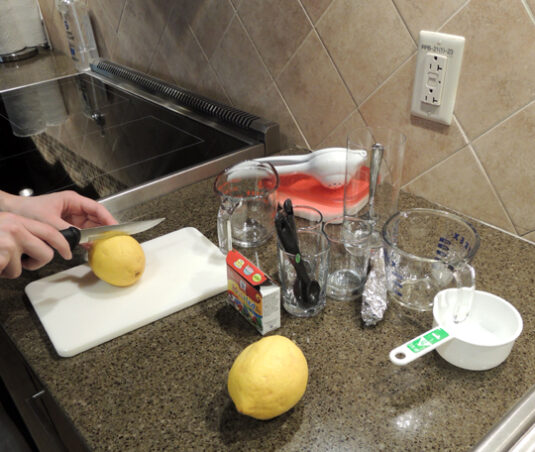 Once we had all the parts ready, we began mixing each layer separately for assembly. We poured each colorful layer over the back of a spoon into a cup of ice, which was supposed to slow the flow and encourage the lemonade to settle into neat layers. However, we quickly realized something was wrong – our beautiful alchemical lemonade looked much more like a watered down coke. 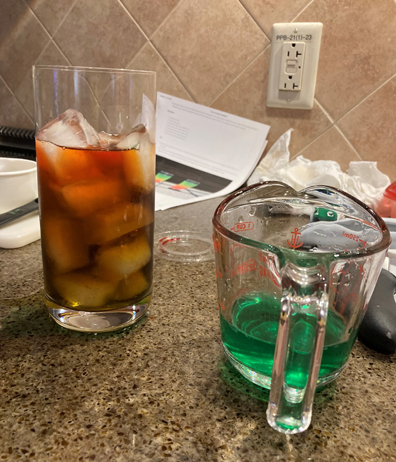 Like a good alchemist, we persisted despite our first failure. After a bit of puzzling over our recipe, we realized that we had been pouring the more dense layers on top of the lighter layer, causing the colors to blend. With the limited amount of ingredients we had left, we decided to try again, this time pouring the most dense lawyer first and working our way to the lighter layer. 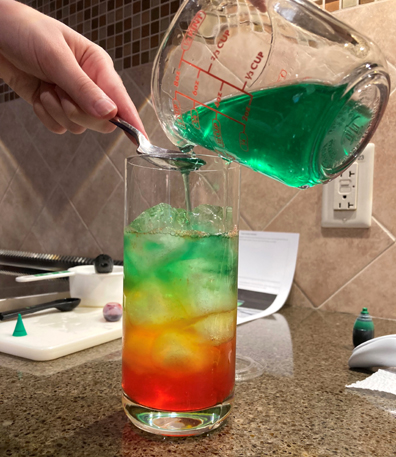 This time we had much more success! Although there was still a bit of blurring between the layers, our alchemical lemonade looked just as fantastic as we had hoped. When it came time to taste test, the flavor was admittedly pretty weak, but it was still a wonderful experience!