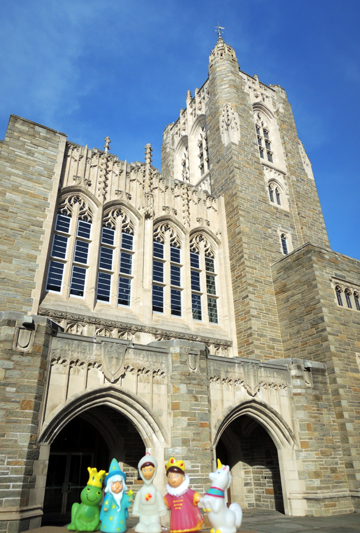 Ah, a lovely group shot outside the castle.

The above image is not Photoshopped in any way (seriously, I went outside Firestone Library and took the shot with everyone throwing me curious glances. That’s dedication folks!).

These lovely finger puppets were prizes at a Fairy Tale Boot Camp program at our library. As families entered the gallery, they were greeted by a Court Jester who asked them to guess the characters from six fairy tale riddles. Identify them all and you won your choice of three puppets (which I ordered from Oriental Trading Company). You were allowed endless hints, so everyone eventually won of course.

Here are the six riddles, written by me and student Kay Zhang:

There once was a girl in red,
who visited Grandma in bed.
But something was wrong:
Grandma’s nose was too long!
This little girl had been very misled.
Answer: Little Red Riding Hood

There once was a boy who was clever
He wanted to stay young forever.
Find pirates and caves,
and Indian braves,
in the land they call “Never Never.”
Answer: Peter Pan

There once was a girl in a tower,
who took a long time to shower.
Why you may ask,
so lengthy a task?
Just to shampoo took her an hour!
Answer: Rapunzel

There once was a house made of candy.
To us that may sound rather dandy.
This house has a glitch.
It comes with a witch!
So, keep a smart sister handy.
Answer: Hansel and Gretel

There once was a boy made of wood,
He told lies whenever he could.
To fulfill his dream,
he learned not to scheme.
His nose finally stayed as it should.
Answer: Pinocchio

Salt, sugar, butter, and flour.
Cook in the oven an hour.
The cookie’s ready to eat,
But be fast on your feet!
He runs on super horsepower.
Answer: Gingerbread Man

Other activities at the program included making castle blueprints (and learning some Medieval architecture in the process), taking a crash course in magical creature identification, breaching a castle wall with dodge balls (complete with heckling knight), deciphering Latin spells (from a certified wizard who also happened to be a University graduate student), searching the gallery for a hidden unicorn, making crowns and fairy wings, and examining utensils, tools, and objects displayed by the Society for Creative Anachronism. We also watched two knights whomp each other repeatedly in battle. 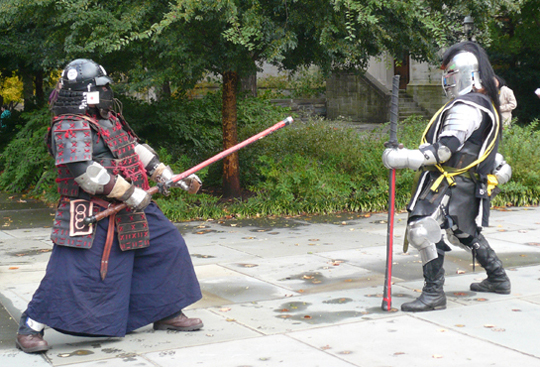 Looking to do some sword fighting yourself? Perhaps these would be of interest.